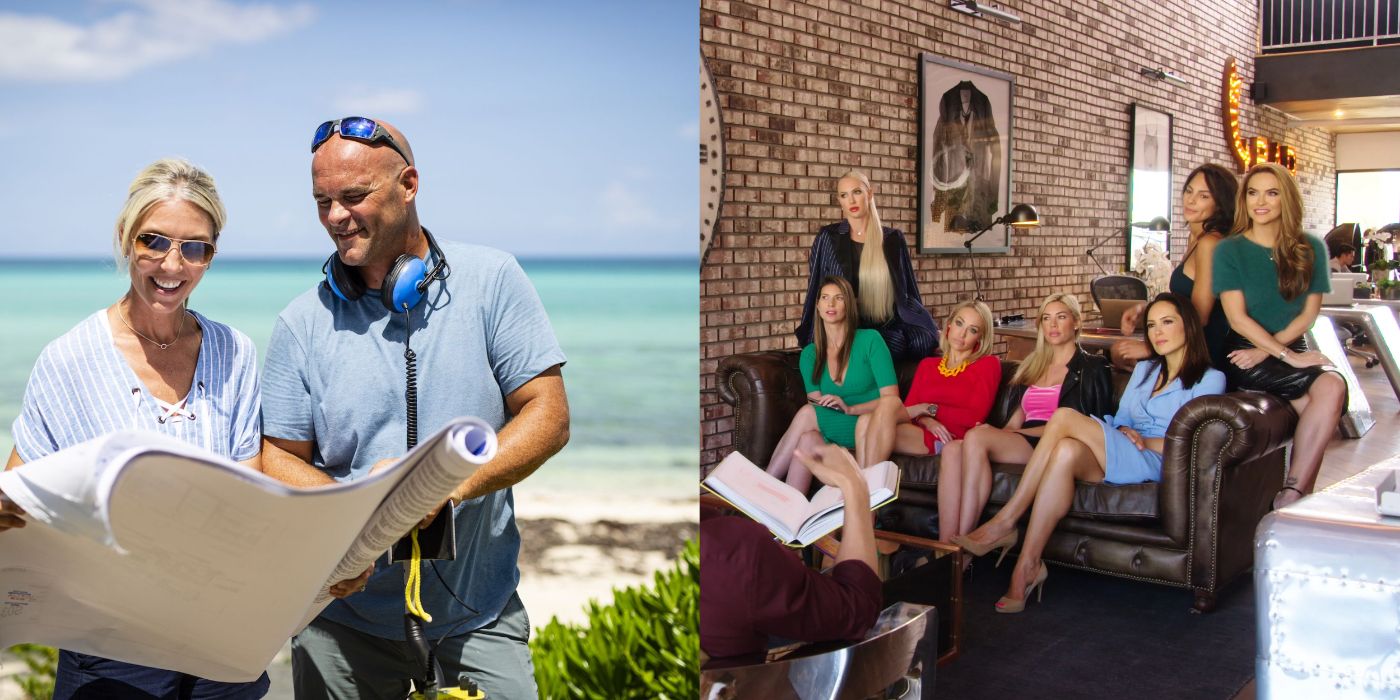 Though James Harris and David Parnes have parted ways with Million Dollar Listing: Los Angeles, the upcoming 14th season will still feature the same homes and drama that has attracted viewers. Since its premiere in 2006, the series has left a mark and paved the way for real estate reality television.

With no set release date for the new season, fans can explore similar reality shows in the meantime. Ranging from real estate to renovation and even romantic matchmaking, these entertaining reality series will fulfill the need for drama, beautiful homes, and expensive taste while waiting for Josh Flagg and Josh Altman to return.

The team at Lucas Lagoons tackles impressive backyard swimming pools in Insane Pools: Off the Deep End. From renovating existing pools to completely new construction including landscaping, the pools Lucas and his crew create are remarkable and straight out of viewers’ dreams.

Related: 7 Reality Home Shows That Aren’t Real (& 7 We Think Are)

Million Dollar Listing fans may not realize the drama that arises from building pools. Building almost entirely in Florida, the crew battles extreme weather and homeowners who insist on the impossible. However, the crew takes everything in stride and is almost comical as they tease one another while building gigantic grottos and waterfalls.

Featuring interior designer Genevieve Gorder and real estate broker Peter Lorimer, Stay Here finds the duo helping homeowners renovate their short-term rentals. The homes they transform are simply beautiful, and the series has the ability to convince viewers to book vacations stays at the homes that are featured.

With homes including a houseboat and a converted firehouse, Stay Here is a unique fixer-upper series that shows how to maximize profit from vacations instead of everyday living spaces for families. Gorder and Lorimer are experts and have humorous chemistry as they work together to help the owners.

Renovation Island follows the professional and personal lives of the Baeumler family as they buy and renovate a resort in the Bahamas. Cameras capture the family of six living in a tiny villa and struggling to restore the long-abandoned resort with a myriad of issues.

Anything that can go wrong, will go wrong, especially when the COVID-19 pandemic completely halts renovations and delays the grand opening. The series is an interesting and personal look at what it takes to open a boutique hotel while trying to manage a young family on a remote island, full of enough drama from construction mishaps to last several seasons.

Formerly Million Dollar Beach House on Netflix, the real estate series following a group of Nest Seekers International Agents was renamed after moving networks. With the backdrop of beautiful luxury homes that viewers could only dream of, the agents bicker and bring the drama as they compete for listings and sales.

Though fans have strong opinions about Netflix reality shows, the cast of the series seems more genuine in comparison to similar shows. Selling the Hamptons offers a glimpse into the fabulous lifestyles of buyers with unlimited budgets on the East Coast.

Fans of Million Dollar Listing should consider watching Indian Matchmaker. Though the series has absolutely nothing to do with realty, Sima Taparia has built an impressive business as a marriage consultant matching her clients with potential partners.

Related: Where Are They Now After Indian Matchmaking?

Taparia must consider her client’s interests, lifestyles, families, and careers when making a match. Instead of selling houses, she’s selling marriage. Indian Matchmaker has a surprising amount of drama as her clients are stubborn with compromise and even ghost one another. Cameras follow her clients on dates as they try to find a compatible partner.

Available To Stream on Hulu & Discovery+

Starring Tarek El Moussa and Christina Haack, Flip or Flop chronicles the former couple as they buy and flip houses for a profit. There is no shortage of drama as the duo often purchase homes sight unseen from foreclosures or short sales. The homes are regularly filled with trash, vandalism, and destruction from the previous owners.

As one of the best HGTV home design reality shows, Flip or Flop follows the entire flipping process from demolition and repairs to staging the homes in order to appeal to buyers. Not every episode is a flip as there are occasional flops from losing money on the sales of homes.

Available To Stream On Hulu

Shahs of Sunset follows a group of Iranian Americans living in Beverly Hills. With a diverse cast, they must balance careers and social lives with their traditional families. Parties and conflict are nothing new as drama and fighting regularly explodes between cast members.

Related: 5 Times The Shahs Of Sunset Were BFF Goals (& 5 Times They Fought On A Whole New Level)

The series offers a perspective into multiple cultures, including Reza Farahan wanting to highlight being gay in the Iranian community. Shahs of Sunset combines luxury with cultural traditions to produce a dramatic, and entertaining series as the cast tries to find their footing in their careers and personal lives, much like Million Dollar Listing.

Unlike similar real estate shows, Selling New York does not focus on one real estate agency, but agents from three Manhattan real estate companies vying for multi-million-dollar listings. With high profile clients including celebrities, viewers get to know the agents, sellers, and buyers with sky-high budgets.

Selling New York is truly the lifestyles of the rich and famous with luxury homes in the heart of New York City. With traditional drama between the cast, like joking about getting listings because of someone’s divorce, the series is more about selling the best houses possible for maximum profit.

Real estate seems like a subplot compared to the drama on Selling Sunset. With new agents coming into the Oppenheim Group in Los Angeles, the elite real estate agents show their true colors with gossip and cattiness. There are beautiful, luxurious homes featured, but each season of Selling Sunset is more dramatic than the previous.

The catfights steal the show with far more drama than Million Dollar Listing, making it feel like The Hills mixed with real estate. Selling Sunset will quickly become a guilty pleasure for viewers as they find themselves taking sides and drawn into the drama of real estate.

Netflix’s new reality series Buy My House finds homeowners pitching their homes to a panel of real-estate tycoons in the hopes of making a sale. With footage of their homes to encourage the sale, the owners explain their price point to the buyers and see if any are willing to invest in the property, out-bidding one another.

Though it lacks dramatic depth and viewers only get so much information about the owners and buyers, the houses shown on Buy My House are incredible including off-the-grid self-sustaining homes and lake houses with potential. The buyers must consider location and any renovations that need to be completed when making an offer. Not every owner leaves with a sale.