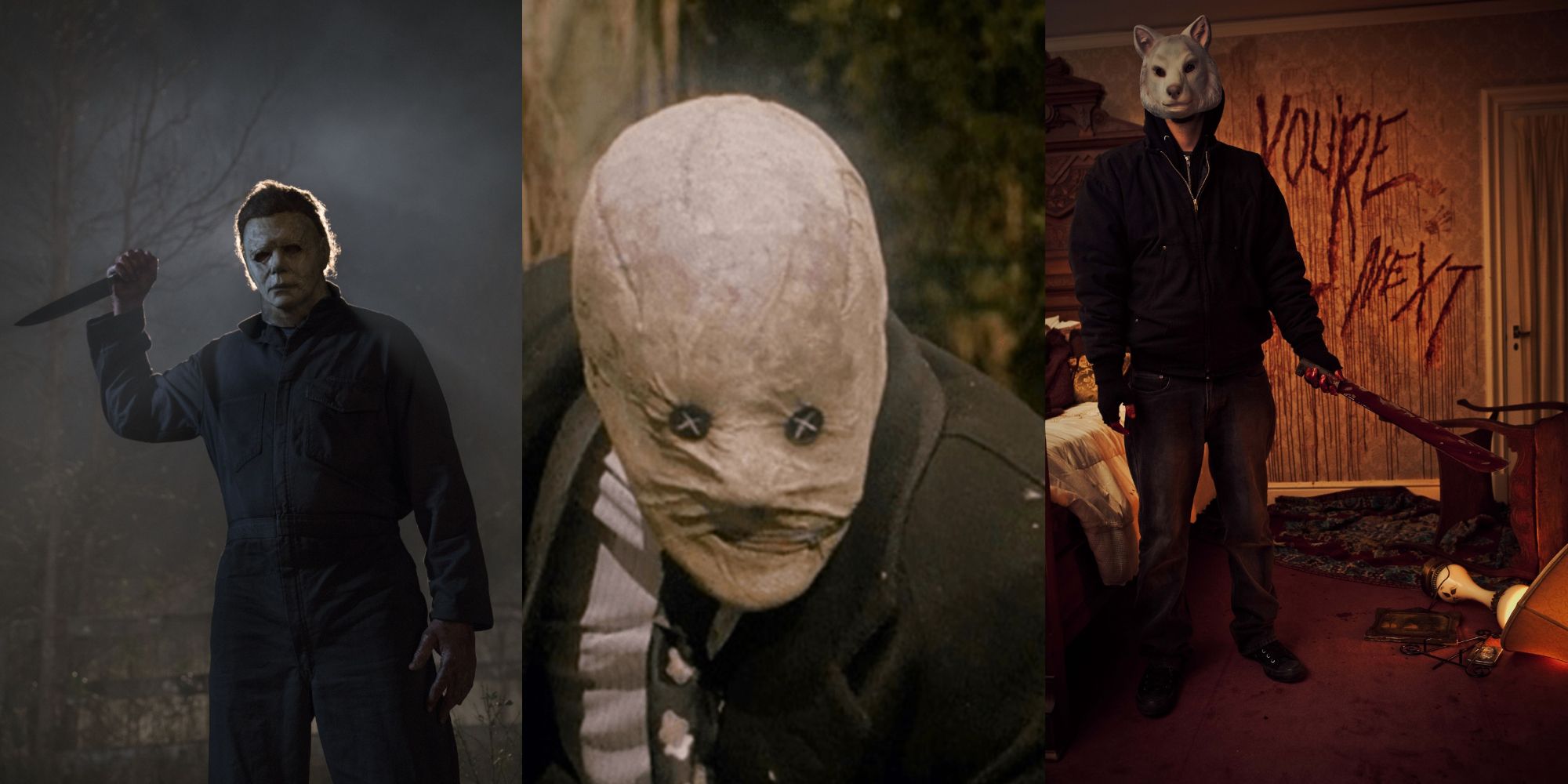 The marketing campaign for Halloween Ends is ramping up, and it stands to reason the entry will have some level of finality to it. Unlike every other genre, having Ends in a film’s title doesn’t necessarily mean just that, but Michael Myers has been swinging his knife for a while.

Laurie Strode has survived as well, mostly with her wit and forethought. But, Myers is also saddled with a baggy incubator of a mechanic’s suit and a solid white mask that’s just as obstructive if not more so. Fortunately for Myers and his reputation, he’s not alone in this department, as there are plenty of other cinematic baddies who choose anonymity of comfort or even full functionality.

Before actor Ethan Hawke was wearing an uncomfortable mask of his own in The Black Phone (just about one of Hawke’s 10 most well-reviewed movies on Metacritic), he was on the other side of the villainous coin, protecting his home and family in The Purge (not unlike Sinister). The Purge has proven to be one of Blumhouse’s longest-lasting and most lucrative franchises, and it’s mostly managed to improve upon the quality of the lackluster first film (despite the game efforts of Hawke and Lena Headey).

The hollow void of a mask worn by the first film’s Manson Family-esque group of killers, however, is pretty great. It’s been reused in subsequent installments, but never quite as extensively (particularly in the trailers) as in the original. With that being said, it doesn’t look remotely breathable. The mouth is sealed, and for the most part, the wearer is left to breathe through the mask’s eyeholes.

Nightbreed, by Hellraiser creator Clive Barker’s is both a cultural curiosity and a mostly-effective film, horror or otherwise. It’s extremely niche, but the theme of society’s willingness to dispel those it doesn’t understand is poignant. The highlight (outside of the makeup and Danny Elfman’s haunting score) of the film isn’t the Nightbreed themelves, however, but rather David Cronenberg’s portrayal of Dr. Philip K. Decker.

Decker leads his patient, Aaron Boone, to believe that he’s responsible for his own doctor’s horrid crimes. Cronenberg gives a perfectly modulated performance, and he’s outright terrifying when he’s not wearing the mask. This makes the fact that he’s even scarier with it all the more impressive, but it looks suffocating. There is a zipper mouth, but he has it at most 25 percent open.

Creep stars Mumblecore icon Mark Duplass, who also had a hand in coming up with the film’s story. Duplass portrays Josef, who hires videographer Aaron to record a documentary of his life before he passes on of a brain tumor. Josef explains that his wife is pregnant, and he wants his child to have at least some memory of their father.

It’s all a ruse, and Josef is really an extremely dangerous individual with a very creepy wolf mask (AKA “Peachfuzz”) in his closet. He doesn’t wear it often, but when he does, it’s obvious that it’s hindering his breathing. With that being said, the viewer gets the sense Josef couldn’t care less either way.

If ever there were an overly bulky, ridiculous mask in a slasher movie, it’s the owl mask in Stage Fright. The 1987 Italian scarer is a cut above other late-80s slashers in terms of pacing and creativity, and there’s even an argument to be made that the owl mask is a classic of the subgenre.

But it looks about 50 pounds bone dry. So, the killer would really be better off with just about any other form of identity concealment. Stage Fright (or Deliria) was a one-off for the slasher subgenre and is well worth checking out, just don’t expect the villain to look comfortable.

The biggest issue with the Lamb, Tiger, and Fox masks from Adam Wingard’s excellent You’re Next is that they look distinctly irritating to the skin. The masks appear to be at the level of dime store plastic. The material scratching the user’s face repeatedly is unavoidable.

In a movie where the plot (in more ways than one) revolves around identity concealment, it would be for the best that the terrorizers wear something they couldn’t find at a Dollar Tree. Fortunately, Sharni Vinson’s Erin is more than capable of taking them on, regardless of what weaponry they carry or in what garments they’re clothed.

While not the most well-reviewed major horror franchise of all time, Saw has some imagery that became imagery practically overnight. Mostly, “Billy the Puppet.” However, the closest “Jigsaw” (AKA John Kramer) comes to wearing a mask repeatedly is his pig get-up. The mask is never shown to be made of an actual pig, e.g. Leatherface’s skin mask, but it’s repulsive nonetheless and must be distracting for the wearer.

Like other blatantly uncomfortable horror movie costumes, the pig mask is also excessively baggy. In earlier installments, it looked amateurish, as if it would fall apart in the washing machine. This leads the viewer to believe it probably hasn’t been washed at all.

4/10 The Shatner Mask In Halloween

The most memorable moments for Halloween‘s Michael Myers typically involve his white masked face appearing from within the darkness. At first, the mask is a fine choice for someone like Myers, but it gets beat up over time to a significant extent. That is, at least, in the current 4-film timeline of Halloween (1978) and David Gordon Green’s trilogy.

Michael’s chosen face was actually a “death mask” made for William Shatner’s Captain Kirk of the original Star Trek TV series. It’s changed over time (depending on the timeline, e.g. the franchise’s fourth through sixth installments) but the original “The Shape” mask remains the apex. By the time Halloween Ends hits screens, the mask will have been worn by Myers’ throughout five different movies. It’s seen better days, particularly after Halloween Kills, and anyone besides Myers would probably spring for an upgrade.

As one of the highest-grossing horror movies of the 1970s, Tobe Hooper’s The Texas Chain Saw Massacre was both lucrative and important. It’s also notable for holding a reputation as a gory film when, in reality, it’s practically blood-free. With that being said, Leatherface’s mask is still made of his victim’s faces.

The whole Sawyer family deals in serving up human meat as barbeque, which is disgusting enough, but wearing several layers of skin over one’s own face is of another level. It’s also impractical, as there’s no chance that “Leatherface” has one hundred percent visual capability.

While the Scream movies’ ability to scare varies wildly, the Ghostface mask remains an effective piece of cinematic costuming. It’s also held as something that can still be effectively satirized in pop culture (especially impressive considering it was done so notably right off the bat with Scary Movie).

Admittedly, there are costumes that look less comfortable, but everything about the Ghostface ensemble just looks baggy​​​​​​. As in, the costume makes it unsafe to run up a staircase while holding a knife. Ghostface has even been shown to be clumsy from time to time, e.g. during Tatum’s garage scene in the original film.

Not enough can be said about the importance of Jason’s hockey mask. With that being said, why does he need it? While Jason’s face changes from installment to installment, one thing remains consistent: he is absolutely hideous. Why impair one’s own vision and breathing ability with a visage that isn’t as frightening as one’s own flesh and blood appearance?