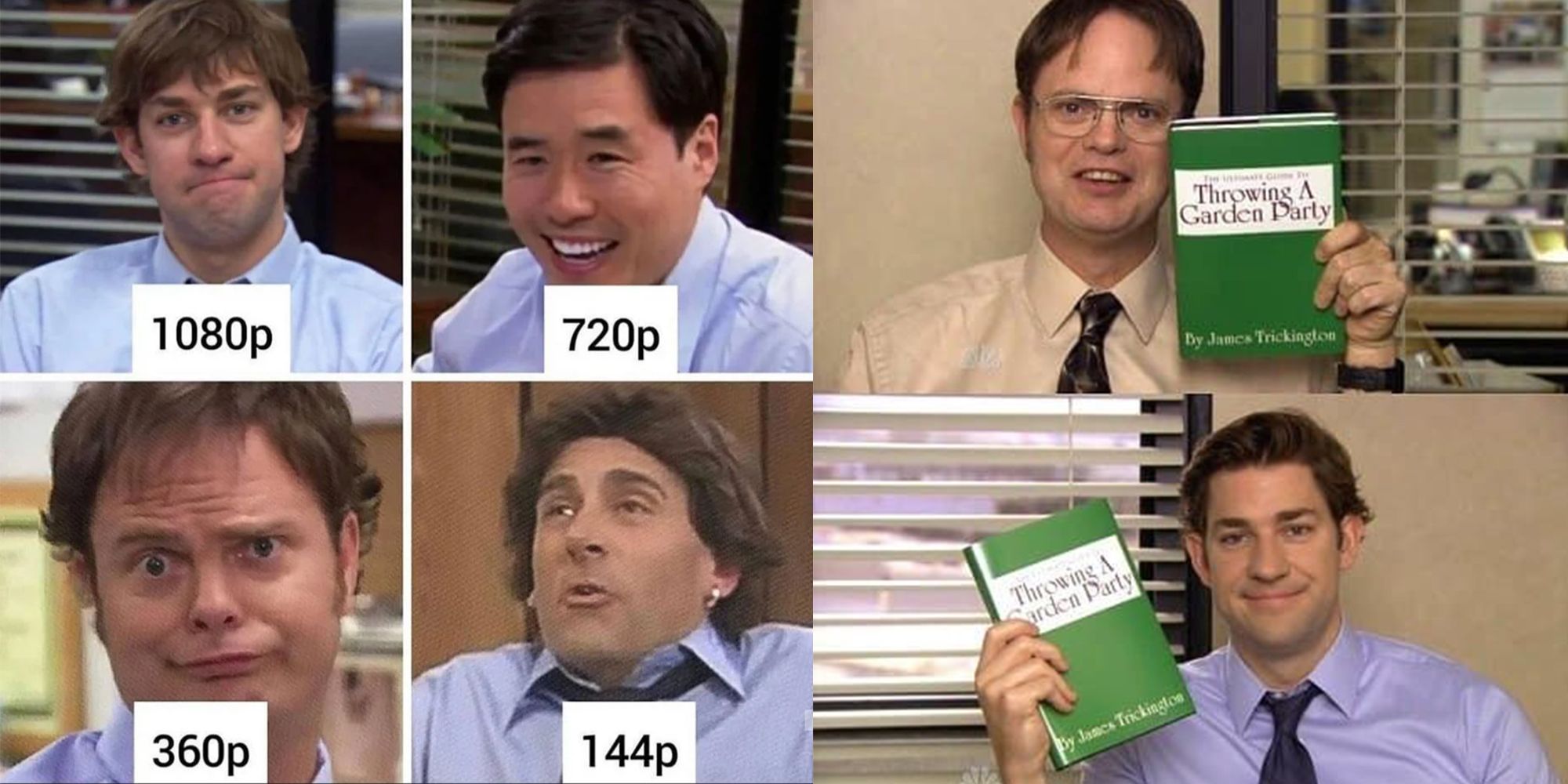 The Office has always been in hot demand, and its viewership continues to be huge, despite the shift from Netflix to Peacock. While the possibility of a reboot hangs temptingly in the air, the lack of one prompts fans to re-watch the original show, especially to see favorite characters like Jim Halpert.

Jim had famously claimed that he had no future at Dunder Mifflin, Scranton, but he ended up finding family and having a flourishing career at the company. He found friends for life in people like Dwight, a soulmate in Pam, and experienced life-changing events while he worked there. These memes highlight the good, bad and funny in Jim Halpert.

Few things are as iconic as Jim Halpert’s side-eyed look in The Office. Whenever Michael did something achingly embarrassing, or Dwight did his absurd German rituals from his farm, Jim was sure to glance at the camera, breaking the fourth wall so that audiences had a little inside joke with just him.

Most of the time, Jim said what everyone was thinking, but he also managed to do it wordlessly with his famous look, which fans love.

The Dedication To Pranking

It was no secret that Jim dedicated a lot of time playing the best pranks on Dwight, and only a couple of hours to his actual sales job at Dunder Mifflin.

Whether it was staplers in Jello, writing whole books on garden parties, or miles of red wire around the office — he spent huge amounts of money on his pranks too.

If Jim had delegated even a fraction of that dedication towards doing his job, he would have gone places. Jim got some big promotions with his half-hearted work anyway, so he had the potential to earn top dollar.

Well-loved by employees in both Scranton and Stamford branches, Andy took a real liking to Jim. His way of showing affection was by calling Jim, Tuna, which was a nickname that stuck for a long time.

The only reason why he earned the name was because he carried a tuna sandwich on his first day to work. Jim didn’t love the name, but it became a big part of his identity and relationship with Andy, when he wasn’t busy having an angry freak-out.

Jim and Pam’s relationship had many milestones, even before they started dating. They began as good friends, but Pam had classified Jim as just that because she was engaged to Roy.

Still, on Michael’s advice, Jim “never, ever” gave up, and pursued Pam, but respectfully. He backed off when she still wanted to get married, but Pam eventually realized she would miss out on a lifetime of happiness if she didn’t accept Jim as more than a friend.

Jim’s affection for Pam obviously led to conflict with Roy, who wasn’t afraid to get physical to let his anger out. One scary but memorable moment which stood out was when Roy came to throw punches at Jim, who chose to protect Karen.

He was inevitably saved by Dwight, who protected him by using the pepper spray he illegally kept with him. It did, however, come to good use at this moment when Jim was protected by his friend.

One Office, Many Jims

Even though Dwight chided Jim for identity theft, it was poor Jim who was imitated and emulated countless times, giving birth to many alternative Jim versions in The Office.

From Michael acting like Jim to Dwight dressing up as him with exaggerated Jim-mannerisms — Jim’s identity didn’t stay his for very long. Replacing him with Jimmy Woo’s Asian Jim for a day will always be remembered by fans, who was the best Halpert, only after the original.

Pam was the center of Jim’s universe, and he wanted to tell her early on about his feelings for her — via the note he put in her Christmas teapot. Even though he took the note away from the teapot before she read it, he did give it to her later.

Fans didn’t know what the note read, but they love to make hilarious memes to guess what the note could have said. Most think Jim was just letting Pam know that she had a better option.

The only person who could bring Dwight to his knees was Jim, and he absolutely flabbergasted him when he managed to nail his mannerisms and look in season 5 of The Office.

The famous “Bears, Beets, Battlestar Galactica” quote was spoken by Jim here, and it only took him $11 to complete Dwight’s everyday look, replete with primary colored shirt, glasses, and slicked hair.

Many would think that Jim and Pam were the greatest pairing on The Office, but true fans would disagree. Even though Jim and Pam followed the friends-to-lovers trope, Dwight and Jim’s love story was even more intriguing.

Spanning over almost a decade, the two sales professionals began working together as staunch enemies, tripping each other up whenever they could. Still, the affection between them bloomed, and they ended up close companions by season 9.

Michael and Jim shared a unique bond, where Jim acted like his keeper and Michael like a child. Jim had to reign his boss in when he tried to be too forward with Holly, or when he chose to date Pam’s mom.

Michael chose to call him “Jimothy” during one of these interactions they had when they were both bosses, which stuck with fans because, instead of trying to correct him, Jim just accepted his new name and identity with Michael.

NEXT: 10 Niche Memes From The Office Only Die-Hard Fans Will Recognize