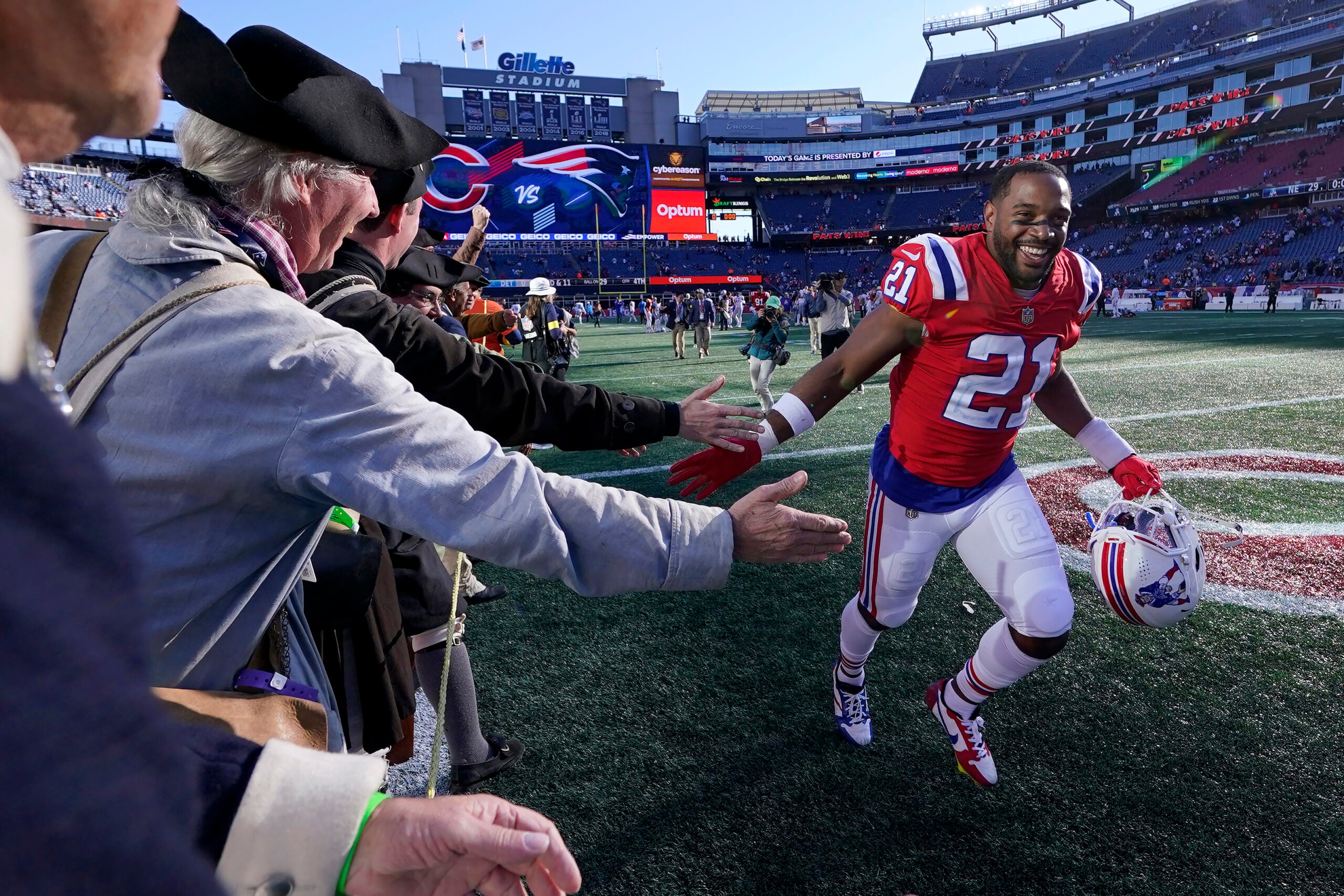 Contents hide
1 It was a fitting game for the throwback uniforms.
2 Bailey Zappe outplayed Jared Goff.
3 The Patriots offensive coaching staff deserves some credit.
4 It was a vintage display from the Patriots defense.
5 Matthew Judon was the difference-maker.
6 Rhamondre Stevenson stepped up in unforeseen circumstances.
6.1 Sign up for Patriots updates🏈

The Patriots got a much-needed, 29-0 win over the Lions on Sunday at Gillette Stadium. Backup quarterback Bailey Zappe emerged victorious from his first career start, helping New England get to 2-3 on the season.

Wearing their throwback uniforms, it was an appropriately old-school game for Bill Belichick’s team. The Patriots’ steady offensive approach — built on the strong foundation of a consistent running game — worked in perfect coordination with a dominant defense.

Here are a few takeaways:

Playing because both Mac Jones and Brian Hoyer were ruled out, Zappe calmly led New England as well as any quarterback has in 2022.

In fact, Zappe’s performance was reminiscent of Mac Jones in 2021: Keeping the offense on schedule with timely (and accurate) passes, the rookie quarterback created space for his defense and offensive playmakers to tip the balance against the Lions.

Zappe did throw an interception, but the context of the play — wide receiver Nelson Agholor tipped the ball after not making the initial catch — mitigates the circumstances from the quarterback’s perspective.

And while the Lions were missing numerous defensive backs by the second half, Zappe’s accuracy and decision-making was still impressive in just his second NFL game.

Though he was a largely unknown figure at the Patriots’ last home game just two weeks ago, Zappe got to hear fans chanting his name as the final whistle sounded.

Having been the subject of endless discussion prior to the season — and continued criticism amid the 1-3 start — the Patriots’ offensive coaching staff put together a quality game-plan on Sunday.

Zappe, making his first NFL start, looked composed throughout the day. It was fitting symmetry that he ended up leading New England’s offense to three scores in the first half as well as the second half.

Credit for the young quarterback’s performance ultimately rests with Zappe himself, but — along with Belichick himself, obviously — quarterbacks coach Joe Judge deserves some as well.

Matt Patricia, coaching against his old team, also deserves praise after the win. The offensive line, a unit Patricia specifically works with, kept 2022 second overall pick Aidan Hutchinson quiet (he made just two tackles) and did not allow a sack all day.

Patricia’s play-calling intelligently attacked the perimeter of the Lions’ defense (both in the running and passing game), especially as Detroit was forced to throw an increasing number of backup defensive backs into the game as injuries mounted.

On a day when everything appeared to go right for New England, the team’s play-calling also clicked. The only critique of the offense would be the inability to score more touchdowns, but in the context of the game, three points felt like a greater margin as the Lions struggled to move the ball.

It was a vintage display from the Patriots defense.

In a game when the Patriots needed a defensive performance to help shelter a backup (rookie) quarterback, Belichick’s team more than answered the bell.

Clearly, the most impressive team statistic was holding the Lions 0-6 on fourth down.

Interestingly, New England managed just one three-and-out, and generally allowed some movement. Yet when it mattered, the Patriots were able to utterly shut down Detroit.

Whereas the Patriots kept Zappe upright throughout the day, the Lions were unable to keep Goff in such a state. Repeated pressure kept the 27-year-old Detroit quarterback from ever finding a rhythm.

After a strong first half, New England was somehow even better in the second half. Not counting Detroit kneeling the ball on the final play of the game, each of the Lions’ four possessions in the second half ended in a turnover on downs.

Indicative of the display was the stat line of Lions tight end T.J. Hockenson. After making 12 catches for 179 yards and two touchdowns in the Week 5 loss to the Seahawks, Hockenson didn’t make a catch on Sunday until the second half when the game was already out of reach. He finished with just one reception for four yards.

Also of note was the return of Kyle Dugger (more on this below), and the play of rookie cornerback Jack Jones, who made an interception for the second consecutive week:

Matthew Judon was the difference-maker.

Originally signed by the Patriots as a free agent in 2021 to be a defensive playmaker, edge rusher Matthew Judon played his role perfectly against the Lions. Continuing the theme of the “Pat Patriot” uniforms, Judon did his best Andre Tippett impression.

He finished the game with two sacks, including one which forced a Goff fumble. New England safety Kyle Dugger was more than happy to scoop up the loose ball and sprint for a touchdown.

Throughout the day, the Lions offensive tackles — both of whom are talented players — simply could not contain Judon on a consistent basis.

Whatever the Patriots might be in 2022, its predicated partly on the pass-rushing ability of players like Judon.

Second-year running back Rhamondre Stevenson had his best game as a professional, finishing the day with a career high 161 yards rushing.

After fellow running back Damien Harris exited with a hamstring injury, Stevenson shouldered the majority of the Patriots’ carries. In doing so, he got a chance to showcase his standalone ability.

Given the highest number of carries he’s seen since he was playing for the Oklahoma Sooners, Stevenson thrived in the Patriots’ run-heavy approach. And when pass plays were called, he committed himself to pass protection, drawing plaudits for his approach.