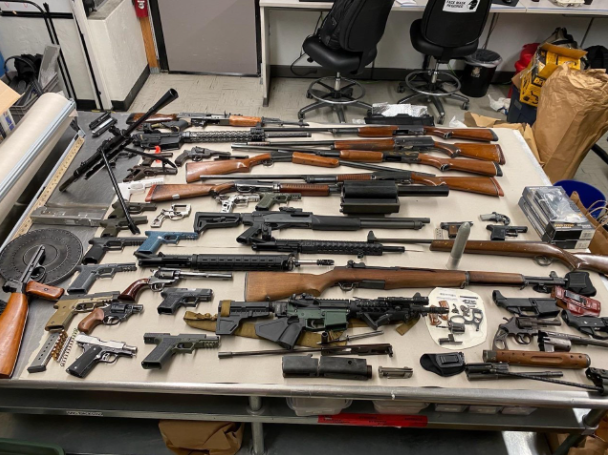 SAN JOSE, Calif. (KRON) — A San Jose man was arrested on Tuesday after police responded to a domestic violence call at his home. The San Jose Police Department said officers found a large stash of guns at the residence of Gary Redeker, 41.

Police were called to the 1000 block of Malott Drive at 3:20 p.m. after the victim claimed that Redeker strangled her and threatened her with a gun. Police said the victim had left the residence before calling.

SJPD put a plan in place to arrest Redeker, and he was arrested around 4:45 p.m. when he left the home with a gun in his waistband. While searching the home, police found what appeared to be evidence of assembling guns.

SJPD obtained a search warrant for the residence and found, “a cache of firearms and parts, as well as tools to machine parts.” Police believe Redeker was assembling guns and selling them illegally. He does not have a license to sell firearms. An image of Redeker’s collection of weapons is below.

“Intimate Partner Violence cases involving firearms are extremely high risk for lethality. The Officers in this case did an outstanding job of safeguarding the survivor as well as the community by safely taking this armed and dangerous suspect into custody. Through their planning and professionalism, Officers were able to avoid a potentially deadly confrontation with an armed suspect,” SJPD Chief Anthony Mata said.

Redeker was hospitalized for injuries he suffered while being arrested. After he is cleared to be released, he will be booked into jail for numerous weapons violations, felony domestic violence, and assault with a deadly weapon, SJPD said.

Anyone with information about the case is asked to contact SJPD’s detective assigned to the case via e-mail at 4321@sanjoseca.gov or call (408) 277-3835.