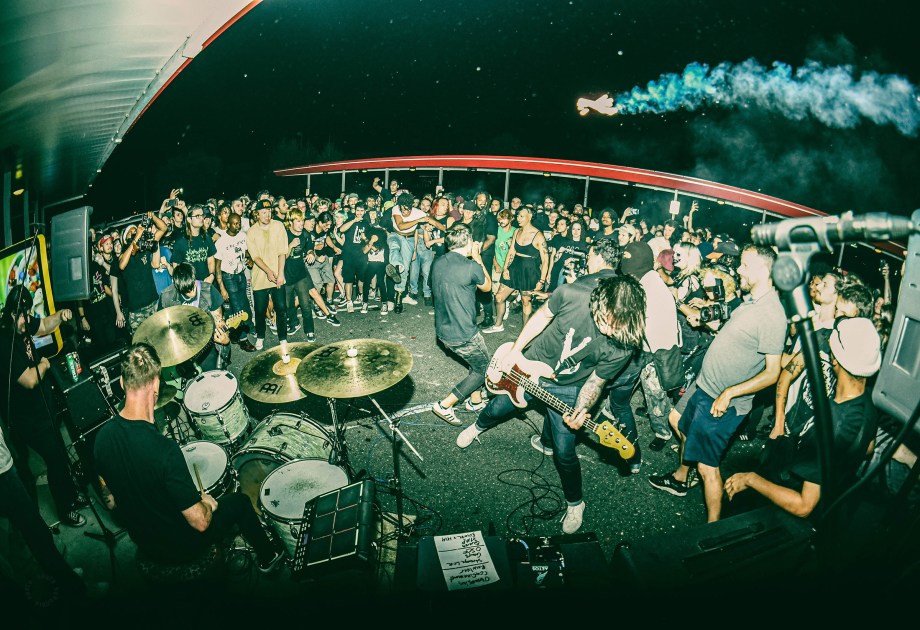 In a fast food parking lot in the South Jersey suburbs, a Philly music collective pulled together about 300 punk rockers for a concert they won’t soon forget.

The Sonic Drive-In in Hainesport, Burlington County — about 45 minutes from Philadelphia — served as the venue for five hardcore bands who fueled a parking lot mosh pit with their fight riffs, breakdowns, and screamed vocals, as a barrage of firecrackers helped set the mood.

“This one was insanely rowdy,” Bren King, vocalist of Philly band Chemical Fix, told Billy Penn. “It was pure chaos.”

The whole affair was organized by 4333 Collective, a group of grassroots concert organizers started by Jayce Williams in his off-campus house in 2018 while he was a student at Rowan University.

Since then, he’s moved to Philadelphia and works organizing all sorts of concerts in more proper venues when he’s not touring or recording with his emo band Sweetpill. But these guerilla punk rock shows still hold a special place in his heart.

“It’s a very nice group of people,” Williams said, adding, “But you might get hurt a little bit.”

He managed to wrangle the Sonic as a venue through a friend in a South Jersey hardcore band who’s worked at the restaurant. They met at one of Williams’ concerts at the 4333 house.

The collective didn’t bother to get permission from Hainesport Township, which did not immediately return a request for comment. They also didn’t ask Sonic’s corporate offices beforehand.

“The concert was held at a franchised location without the knowledge or approval of the independent franchise owner or Sonic corporation,” said Brent Reams, Sonic’s national public relations manager. “The franchisee is investigating the matter.”

This actually wasn’t the first show 4333 held at the Sonic. Another one with a lineup of smaller bands was organized by Williams in March, he said. His friend who’s worked at the restaurant has also held his own shows there.

So far only a few short clips of the show have been publicly released so far by prolific concert videographer Sunny Singh on his platform Hate5Six, they’ve already garnered more than 32,000 views on YouTube and more than 30,000 on TikTok.

But on Thursday, Singh posted a video of each band’s set with audio mixed professionally by Ewing’s Landmine Studios to his Patreon account.

In addition to Chemical Fix, last week’s show included New Jersey’s Gel, who were the headliners, along with Exhibition and Phantom. California band Scowl also played an unannounced set at the show. They opened for Limp Bizkit at Madison Square Garden in May.

Williams said he hopes to put on more hardcore concerts at zany venues like this going forward. He’s done them in the past, too.

In fact, most of the lineup for the Sonic show played at a guerilla concert organized by Williams last September at “Walmart Beach,” which is one of the loading piers behind the big box store on the Delaware River waterfront in South Philadelphia.

Both this show and the ones at Sonic were a form of DIY meme marketing meant to bring attention and new fans to underground bands and the hardcore scene at large.

Williams was partly inspired by the now famous meme of a hardcore band called Wacko playing at a Denny’s in Orange County, California. A clip of their set has garnered more than 3 million views on YouTube.

The Sonic show was also a hit — on a more underground scale. Williams said 4333 gained 400 new Instagram followers in the days following the show. Chemical Fix gained about 200, King said.

He and the band debuted their new single “Strange Love” in the middle of their set at Sonic and are currently getting ready to go on a nationwide tour.

King gets why outsiders often perceive hardcore shows as intimidating or even dangerous.

“It looks like it’s just people being animalistic,” King said. “But it’s an outlet for aggression… This is a space where you can truly be yourself.”