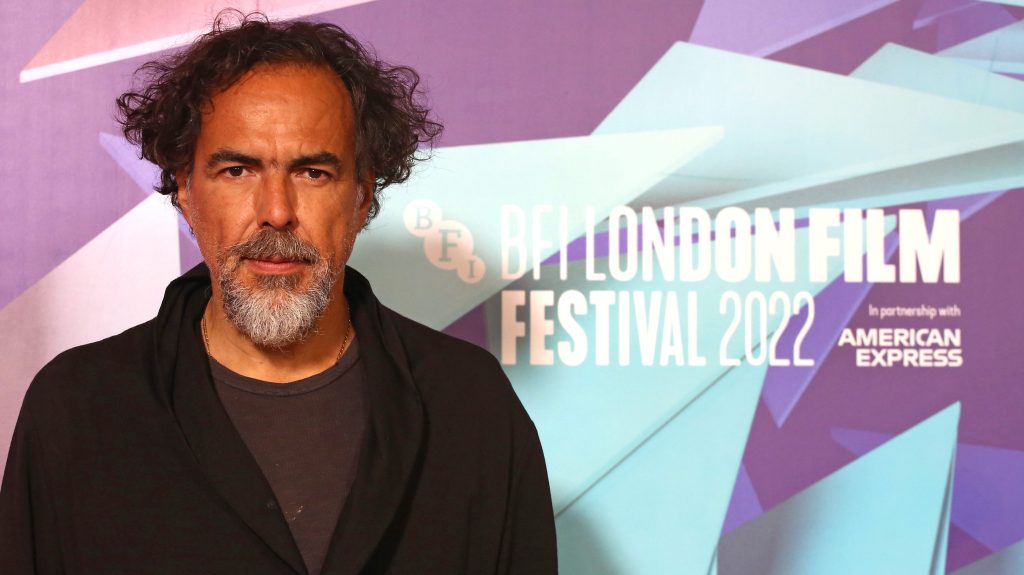 The strengths and possibilities of cinematic language were heavy on Alejandro G. Iñárritu’s mind as he sat down for a keynote ‘screen talk’ at the London Film Festival on Sunday afternoon.

The director is in London to screen his latest film Bardo, False Chronicle of a Handful of Truths. The keynote opened with Iñárritu offering a survey of his career, during which he highlighted the importance of rhythm and sound in how he crafts the visual grammar in his stories.

“Rhythm is god. I think that there is nothing that is without rhythm that can survive,” he said. “The rhythm of the blocking of a scene. The silence between the lines. That frequency is music in a way. It exists in every art expression. I think that’s the key to transmitting something that is profound.”

Moving onto the importance of sound in artmaking, Iñárritu — a former radio DJ — added that he believes he has a “better ear than eye,” and he often uses music to move through a film’s narrative.

“I love much more music than films, and I think I see a film much more when I hear it,” he said. “Cinema is an audiovisual medium. That’s why audio is first. Audio is maybe 60% of the experience, I think. Even when films were silent, there were sometimes small effects, and even silence is sound. It’s an interpretation of sound. I think sound can really be an incredible part of the story and it can add things.”

Later during the lengthy keynote, Iñárritu gave some specific insights into the production of his films, including the multi-academy award-winning Birdman or (The Unexpected Virtue of Ignorance), starring Michael Keaton and Emma Stone.

Iñárritu said it took him two years to find funding for the film, and he was forced to finish production in 19 days due to financial constraints. However, he said the film was inspired by a period of time he spent at a meditation retreat in 2012.

“I think that helped me to suddenly get out of my own mind and see myself, laugh about myself and be conscious about the voice inside of me,” he said.

Iñárritu’s latest Bardo follows a similar self-reflective path. The film debuted earlier this year in Venice. Written by Iñárritu and Nicolás Giacobone, the flick is billed as a nostalgic comedy set against an epic personal journey. It chronicles the story of a renowned Mexican journalist and documentary filmmaker who returns home and works through an existential crisis as he grapples with his identity, familial relationships, the folly of his memories as well as the past of his country. He seeks answers in his past to reconcile who he is in the present.

The film marks Iñárritu’s return to Mexico. The director hasn’t shot a film in his home country since 2000’s Amores Perros, starring Gael García Bernal. Later during the keynote, Iñárritu said he has “nothing more to give” after completing the almost 3-hour film.

“I gave everything in terms of soul and heart,” he said.

“Once you leave your country for 20 years, there’s no way back. And it is this battle that the film is about.”

Iñárritu said that he also saw the film as an opportunity to challenge established cinematic conventions that he has grown tired of seeing.

“I get very bored easily. I don’t have tolerance anymore,” he said. “The essence of cinema is language, and nobody talks about that anymore. It’s all about the box office. But I like to explore the possibilities of language. And I think this film serves the purpose to liberate from certain conventions that I’m a little bit tired of or not interested in anymore.”

He concluded by saying he hopes Bardo will provide a “sensorial experience of cinema” for audiences.

Bardo also marks the first time Iñárritu has worked with Netflix. The streamer is releasing the film on December 16 following its festival run. Prior to landing on Netflix, the film will play in movie theaters in Mexico starting on October 27 as well as in select North American theaters on November 4.