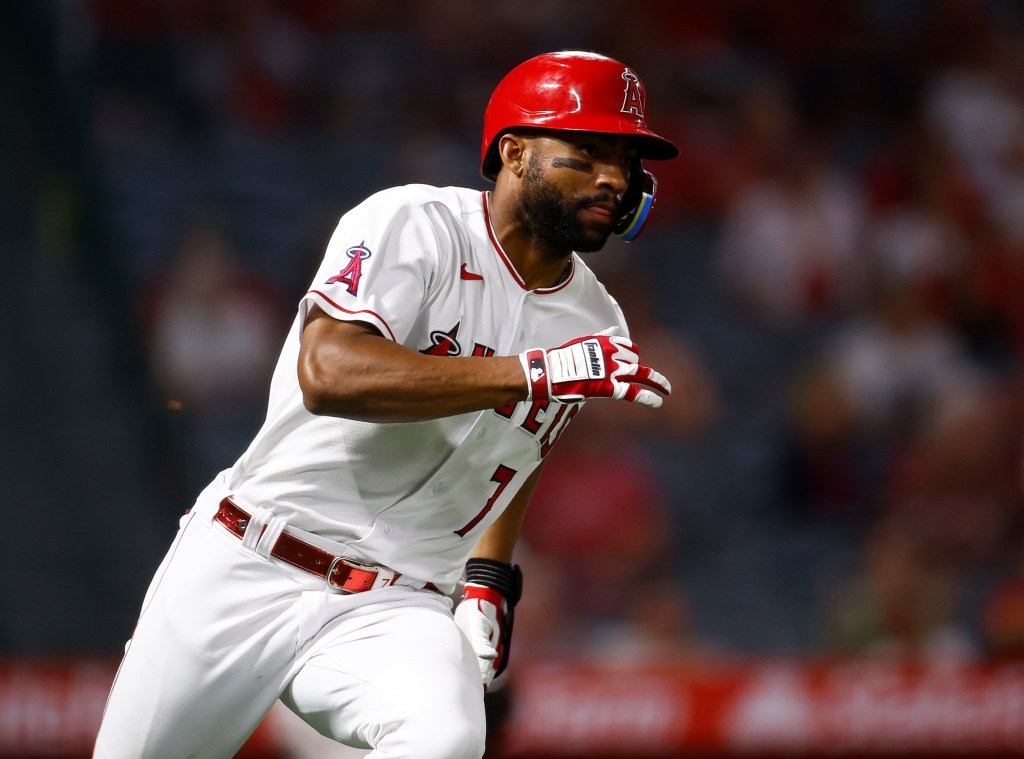 OAKLAND — Of all the numbers under Jo Adell’s name after his third season in the major leagues, the one that gives the most reason for hope is this one.

Adell is still just 23, young enough that the Angels can maintain some optimism about him despite another season of unmet expectations.

“It’s so intriguing, because he’s so athletic,” Manager Phil Nevin said. “You see it in the field. You see it when he runs the bases. You see it with his pregame work. You just feel like at some point it’s really going to click and translate.”

So far it looks like this: Adell is hitting .226 with eight home runs and a .641 OPS. His performance in the field has noticeably improved, including a handful of spectacular catches and strong throws, and fewer misplays.

“It’s had its ups and downs, but that’s going to be every year,” Adell said when asked to evaluate his season. “I look forward to bringing what I’ve learned this year and bringing it back next year and hopefully impacting the team and helping this team win.”

Adell’s athleticism – his raw power and his speed – are the tools that continue to impress. He demonstrated the power over the weekend with a pair of rocket extra-base hits, a double and a homer.

His primary issue at the plate, though, is his discipline. Adell has struck out 103 times and drawn just 11 walks.

“It’s got to get better,” Nevin said. “He knows that. That’s part of the swing decision-making. Attack earlier in the count when he gets pitches to hit. Maybe shortening up. Those are things he’s gonna have to work on. … When he does hit it, it’s impressive. If you can minimize those (misses) a little bit and maximize when he’s impacting the baseball the way he does, you’ve got a pretty good player.”

Adell admits that his strikeout-to-walk ratio has been disappointing. In his first two seasons, he struck out 87 times and walked 15 times, so he’s gotten slightly worse.

“It’s just one of those things where with me wanting to come in and help the team and put on a swing on if I can, I think over-aggressiveness got the best of me in some of those counts,” he said. “I’m going to continue to work on that, continue to know the zone and what I’m trying to hunt.”

It’s all just part of the struggle that Adell has embraced.

Anthony Rendon was in the Angels’ lineup on Monday, playing third and batting fifth. It was his first game since June 14, before he had wrist surgery.

Rendon went through his rehab and returned just in time to serve his five-game suspension and squeeze in a few at-bats before heading home for the offseason.

Nevin said the plan was for Rendon to get a couple of at-bats on Monday and then play as many innings as he could on Tuesday. He is not expected to start on Wednesday, in the season finale. It’s a similar routine to what he would do if he were starting a minor league rehab assignment.

Pitching coach Matt Wise said the Angels have been timing all of their pitchers lately to see how many of their pitches would have been in violation of the restrictions of next year’s pitch clock. He said about 50 percent of the time the pitchers have used too much time.

“There’s a lot of guys across the league that it’s going to be a major, major adjustment,” Wise said. “It’s just something that you have to get used to.”

Wise Shohei Ohtani is one of the pitchers who generally works too slowly.

“Definitely he will make a change,” Wise said. “Typical Sho, he will probably come in (next year) exactly where he needs to be.”

Catcher Kurt Suzuki is scheduled to start on Tuesday, the final start of his 16-year major league career. Suzuki began his career with the Oakland A’s. “This is a special place for him,” Nevin said. “His family will be here so we’ll try to make it as special as we can for him on his exit.” …

Right-hander Davis Daniel joined the Angels as part of the taxi squad.