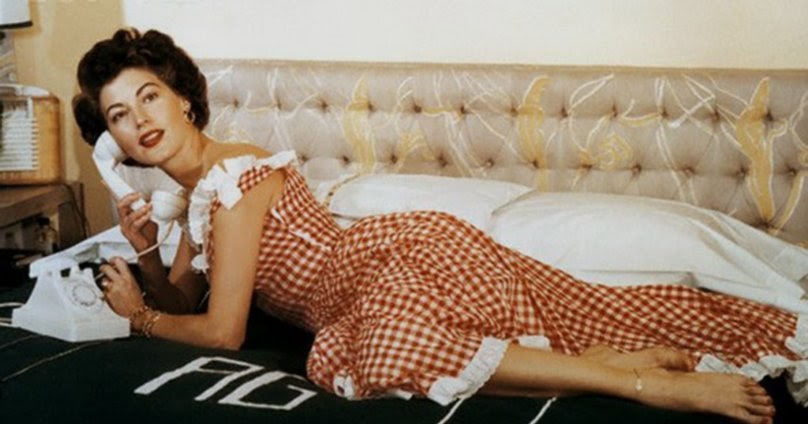 Ava Gardner was a sultry Hollywood superstar known for her many love affairs.

She was born Ava Lavinia Gardner on December 24, 1922, in the tiny town of Grabtown, North Carolina. Ava grew up in a poor farming family and was the youngest of seven children. In 1941 an MGM talent scout saw her photo and arranged for her to have a screen test. When MGM president Louis B. Mayer saw the test he said “She can’t act. She can’t talk. She’s terrific”. She made her film debut in the 1941 short Fancy Answers. Shortly after arriving in Hollywood she began dating actor Mickey Rooney. They were married in January of 1942. Nineteen year old Ava was a virgin on her wedding night. Unfortunately Mickey cheated on her and she left him after less than a year of marriage. She started getting small parts in movies like Ghosts On The Loose and We Were Dancing. When she wasn’t acting she posed for countless sexy pin-up photos. Ava married bandleader Artie Shaw in 1945. The following year she landed her first starring role in the film-noir The Killers opposite Burt Lancaster.

Her sultry performance made her a star. More hit films followed including The Hucksters, One Touch Of Venus, and The Bribe. After divorcing Artie she had a string of lovers including Robert Taylor, Turhan Bey, Robert Walker and billionaire Howard Hughes.The stunning brunette openly admitted she loved sex and was often called “the most irresistible woman in Hollywood”. Ava became very good friends with her fellow MGM actress Lana Turner. The two women were so close that Confidential magazine accused them of being lovers! She fell in love with married superstar Frank Sinatra in 1948. When the press found out about the affair there was a major scandal and she was labeled a homewrecker. Frank divorced his wife and they were married on November 7, 1951. Ava became pregnant but had an abortion because their marriage was so rocky. The couple split in 1953 but they continued to see each other for years. She always said Frank the great love of her life.