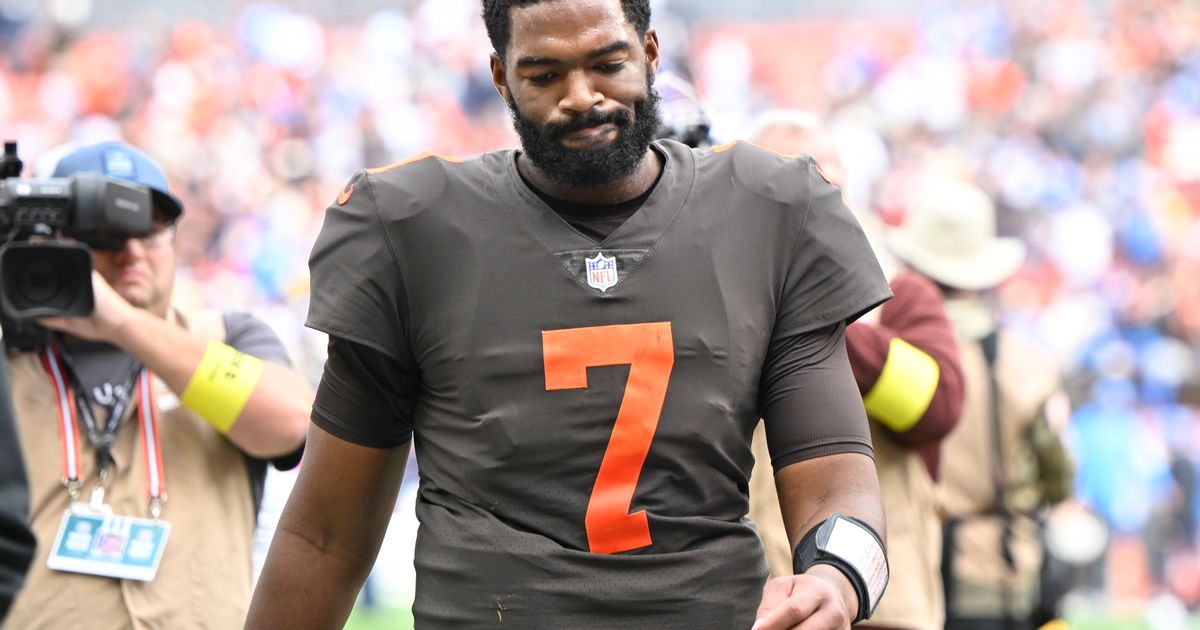 CLEVELAND (AP) — Deshaun Watson will return to the Browns’ headquarters on Monday, rejoining a team with problems that go far deeper than its quarterback.

Cleveland’s numerous issues — a disappointing defense, an inability to finish and quarterback Jacoby Brissett’s late-game mistakes, to name a few — were exposed Sunday in a 30-28 loss to the Los Angeles Chargers, who tried to give the Browns a win.

Rookie Cade York could have washed away many of the Browns’ sins, but missed a 54-yard field goal with 11 seconds left after the Chargers decided not to punt on fourth down and gave the Browns a final chance.

But even handed a gift, the Browns (2-3) couldn’t unwrap it.

Cleveland has had the lead entering the fourth quarter in every game and lost three times.

On Monday, Watson will be back inside Cleveland’s facility while he continues to serve his 11-game suspension for alleged sexual misconduct. Watson won’t be eligible to play until Dec. 4 and, unless the Browns get things turned around quickly, any thoughts they had about making the playoffs will be long gone by then.

Cleveland’s biggest problem against the Chargers was its run defense. The Chargers came in averaging a league-low 64.5 yards per game, but rolled up 238 against the Browns, who missed tackles, blew assignments and couldn’t get stops when they needed them.

One play after the Browns opened a 14-0 lead in the first quarter, Chargers back Austin Ekeler broke off a 71-yard run that set the tone for L.A.’s ground assault. Ekeler finished with a career-high 173 yards.

Cleveland’s defense figured to be a strength, but the unit has been plagued by communication breakdowns that have led to big plays. Coordinator Joe Woods has become a target of fan frustration.

While the Browns seem to be talking better, they’re not tackling.

It’s not just that they’re getting beat at the point of attack, but they’re not wrapping and bringing down backs.

“It’s not good,” said end Jadeveon Clowney, who was back after missing two games with an ankle injury. “We have names and the pieces on paper, but we have to come out here and put it together.

“I’ve been on my fourth team, and this is by far one of the (most) talented defenses I have been on. I see a lot in this defense, and right now, we aren’t showing up and doing it.”

And once again, Brissett, who is starting during Watson’s ban, threw a costly interception with the Browns down just two in the final minutes. On third down from L.A.’s 9, Brissett escaped trouble and rolled right.

Brissett probably could have run for a first down or a TD, but threw across the middle toward receiver Amari Cooper and Chargers safety Alohi Gilman picked him off in the end zone with 2:44 remaining.

Brissett was also intercepted late in last week’s loss to Atlanta, and as he tried to rally the Browns in Week 2 after they blew a 13-lead in the final 1:55.

“Obviously, the ball was in my hands for a reason, and that was not the outcome that I was intending to happen,” Brissett said. “I’m just better than that. I truly am, and I know that. I will be better next time.”

Brissett’s got six more games before Watson takes over. In the meantime, his return could give the Browns a badly needed jolt of positivity.

“I hope so,” Brissett said of Watson’s return. “It will be good to see him.”