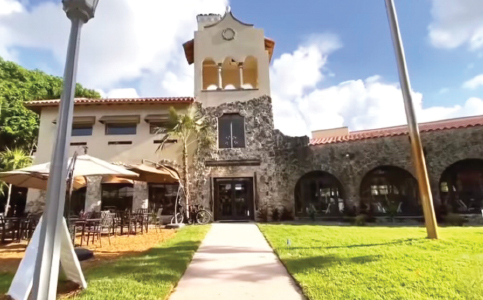 Written by Abraham Galvan on September 27, 2022

Since taking over operations in June, the City of Coral Gables has taken many steps to fully reestablish its Coral Gables Golf & Country Club.

The golf and country club has a little over 450 members and as upgrades are completed, projections are that this number will continue to grow, said Carolina Vester, the city’s community recreation assistant director.

“To be able to provide top-of-the-line services we have set 2,000 as the limit for the number of memberships,” she said. “Earlier this month we held our first members adult social as well as a family event. We had many new prospective members join us as well.”

The 100-year-old building at 997 N Greenway Drive has gone through numerous repairs including upgrades to the pool, athletic club, main ballroom and exterior beautification.

“We also hired Candy Kakouris as our club manager and have filled key positions such as our venue manager, who is actively working with event planners to book events at the club,” Ms. Vester said.

While there have been expenditures to upgrade the facilities, city staff expect that the club will be self-sustaining after the first full year of operation. So far, the city has spent around $1.5 million on repairs.

The city took over operation duties after an initial deal fell through with proposer BTW Investments back in July 2021. The 15-year proposed lease had a deal to put roughly $5 million upfront through a partnership, agree to a base rent of $360,000 per year, escalating 3% for each leasing year thereafter, and propose percentage rent participation based on gross revenues. City staff determined that BTW Investments’ proposal was nonresponsive because it did not meet the minimum requirements at the time.

In March 2021, the city decided to cut ties with Coral Gables Country Club’s previous operator Coral Grand after only 10 years.

Coral Grand operators were notified that the city would not renew its ten-year lease agreement to operate the club due to failure to pay rent for April 2020 and to pay percentage rent from October 2017 to Sept. 30, 2018, and Oct. 1, 2018, through Sept. 30, 2019, which violates the initial lease, according to a nonrenewal letter the city sent to the club’s operators.

After numerous conversations with Coral Grand, the city settled to conclude an extended operator period effective through April of this year and then take leadership.

“The country club was the first public building in Coral Gables and was envisioned as a place for the community to gather,’ Ms. Vester added. “As we continue to upgrade the facility and add programming 100 years after it was first built, this iconic building will once again be fulfilling its mission to build community.”