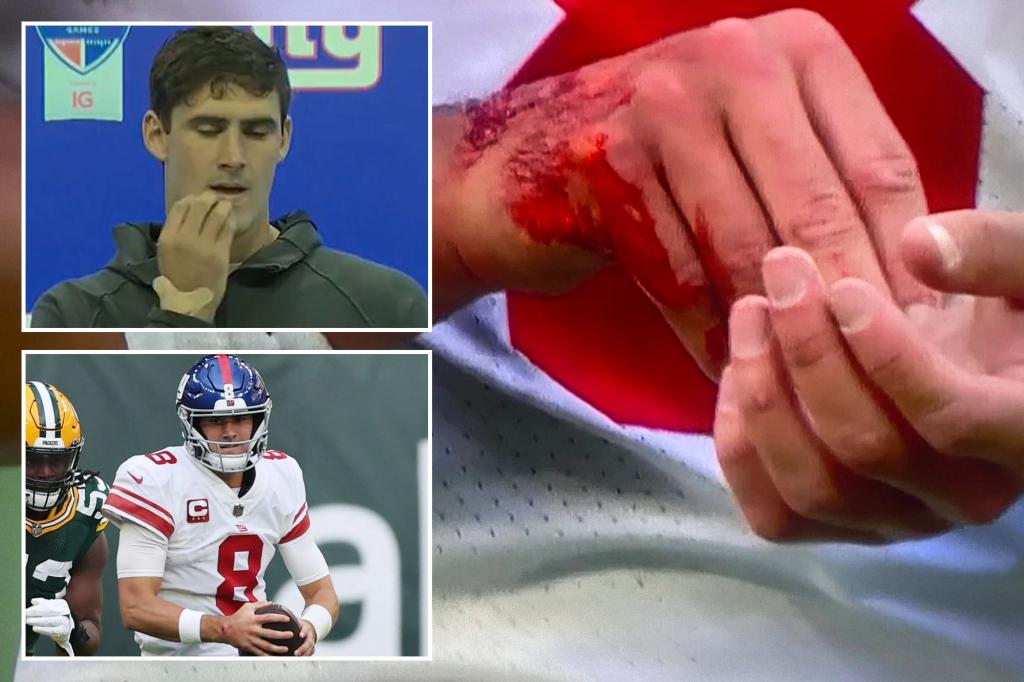 Daniel Jones was gutting through more than just an ankle injury during the Giants’ thrilling 27-22 comeback win over the Packers in London on Sunday.

The Giants starting quarterback had a gash on his right hand in the fourth quarter, and NFL Network cameras showed blood streaming on the back of Jones’ throwing hand. He sported a bandage on the hand as he spoke to reporters after the game.

It did not stop Jones from leading a 15-play, 91-yard drive that ended with Gary Brightwell scoring a 2-yard touchdown with 10:08 remaining in the fourth quarter that tied the game at 20-20.

The Giants, who improved to 4-1 with the win, trailed 17-3 in the first half and were behind 20-10 at halftime. But they kept the Packers’ offense off the board in the second half, allowing only a designed safety on a clock-killing play with 11 seconds remaining.

Jones suffered an ankle injury during last Sunday’s win over the Bears that seemed like it could keep him out this week, but it did not keep him from practicing and he healed well enough to play the entire game against Green Bay.

Saquon Barkley returned from a brief injury break and put the Giants ahead with 6:08 left in the game, taking a direct snap in for a 2-yard rushing touchdown.

Jones completed 21 of 27 passes for 217 yards, while also rushing 10 times for 37 yards. He did not have a touchdown but did not turn the ball over and was sacked just once.

“We’ve always had confidence in our group. We believe in ourselves, but how other people view us, I don’t think we are concerned with that,” Jones told reporters.

The Giants will return home from London with a game against the Ravens at MetLife Stadium on tap next Sunday.