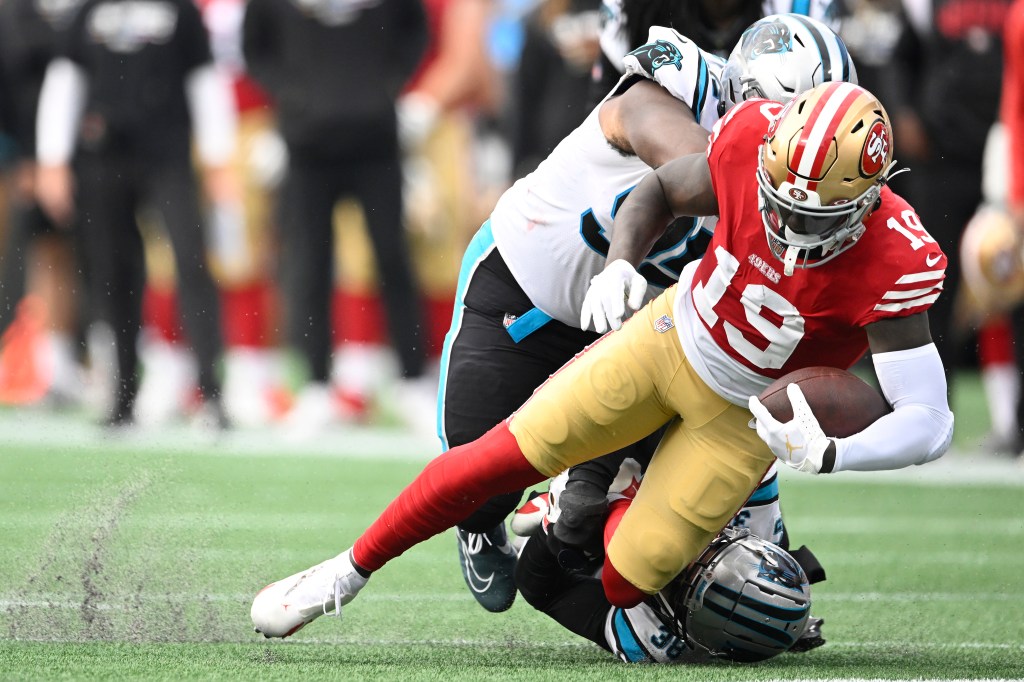 CHARLOTTE — Deebo Samuel lined up in the left slot, left his defender in the dust, cut across the end zone and, voila, caught Jimmy Garoppolo’s 4-yard pass for a third-and-goal.

This was the offensive response the 49ers desperately needed on Sunday, for several reasons, en route to a 37-15 victory.

Before Samuel scored, the 49ers led just 17-9, and that was cause for familiar concerns.

See, the Panthers had just pulled within a score thanks to Christian McCaffrey’s 19-yard, fourth down run. It was an unpleasant reminder to the 49ers that they blew the second half in the previous two road games this season in Chicago and Denver, not to mention last season’s NFC Championship loss to the Los Angeles Rams.

Adding to the tension was this unfortunate news: defensive end Nick Bosa did not play in the second half due to a groin injury. That alone could detract from the victory, but other injury exits were made by kicker Robbie Gould (knee), defensive end Jimmie Ward (hand) and, with 4:12 remaining, cornerback Emmanuel Moseley (knee).

So the 49ers needed Samuel, their All-Pro catalyst, to spark an offense that had produced just one touchdown on 20 second-half drives before Sunday.

After growing up 80 miles east in Inman, SC, Samuel came to life to lead the 49ers’ drive to the north end zone. He started with his first catch of the day (16 yards), followed by a 3-yard run, and was kept alive by a pass interference penalty he drew against a Carolina cornerback on fourth-and-3. Jauan Jennings’ 32-yard, catch-and-run brought the 49ers to the 3-yard line.

On third-and-goal from the 4, Samuel scored his second touchdown in as many games. It wasn’t as dramatic as his 57-yarder in last Monday night’s win over the Rams. It was critical, however, to stop the bleeding on Sunday.

The 49ers (3-2) now head to the mountains of West Virginia to practice at The Greenbrier Resort for a third straight season. Then, next Sunday, they visit another NFC South team, the Atlanta Falcons (2-3).

Bosa might not be the only 49er missing from that upcoming outing. Gould suffered a left knee injury making a midfield tackle on the kickoff following Samuel’s touchdown, and Ward’s season debut lasted just one game before leaving with a hand injury. Moseley, who had an interception return in the first half for his first career touchdown, exited with an apparent knee injury while defending a deep pass with about 4 minutes left.

The 49ers defense is already playing without defensive tackles Arik Armstead (foot) and Javon Kinlaw (knee) — and their offense is without left tackle Trent Williams — but losing Bosa for any amount of time will hurt the most.

Opponents of the 49ers are averaging a league-high 11.5 points through four games, and although the Panthers have surpassed that mark, they have repeatedly had to concede on field goal attempts. Meanwhile, the 49ers scored their most touchdowns in a game since last season’s opener in Detroit (which also preceded a Greenbrier layover).

The 49ers’ vaunted defense made their first run after halftime. That’s when McCaffrey had his fourth and 1, 19-yard touchdown run. It cut the 49ers’ lead to 17-9, and McCaffrey was stopped on a two-point conversion attempt. Bosa was on the sidelines, still in full uniform, while that drive unfolded without him.

If Samuel’s touchdown wasn’t the highlight of the 49ers, perhaps it was Jeff Wilson Jr.’s 1-yard plunge. before the fourth quarter by a 30-12 margin.

Also getting in on the scoring act, for the first time in his five-year career, was cornerback Emmanuel Moseley. He returned an interception 41 yards for a touchdown, 55 seconds before halftime. This made the CBS broadcast to note that the Panthers have lost 24 in a row when they have at least 17 points.

However, Garoppolo led a touchdown drive on the first series of the game. Tevin Coleman’s 9-yard, catch-and-run put the 49ers ahead 7-0 and capped a 75-yard drive that was sparked by Wilson’s 41-yard run to the 9; Wilson had his first 100-yard game this season.

Ward, starting as a hybrid linebacker, injured his left hand after cutting into the backfield to try to stop a McCaffrey 9-yard run. Ward, a pregame captain, missed the first four games with a hamstring injury, and although he is eligible for a second stint on Short-Term Injured Reserve, the 49ers receive just eight such designations in a season

Kittle, on his 29th birthday, had four catches on the first two drives, but he gave the Panthers a gift by fumbling the 49ers’ second possession. Panthers kicker Eddie Pineiro missed a field goal on their next possession; he made his next three attempts.

Gould made a 49-yard field goal for a 10-0 lead in the second quarter after having a field goal blocked for the second time this season. He took hard hits to his shoulder making tackles at midfield

When Pineiro went for a 34-yard field goal with 6:51 left, a chorus of boos filtered from the scattered Panthers fans who stood in a half-full stadium that was overrun by a throng of 49ers fans in jerseys. street reds.

Once the carnage was done, Brock Purdy finished this deal by taking his first NFL snap, in a kneeling victory formation.