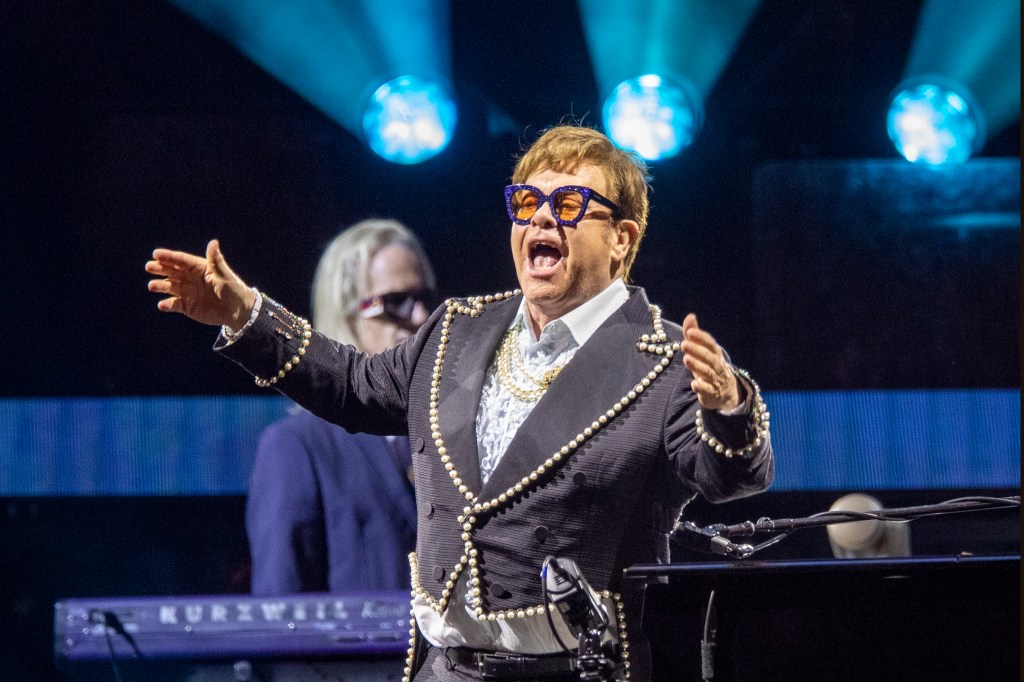 Yet, they were not ready to say goodbye to Elton John as the Rock and Roll Hall of Famer set up shop at Levi’s Stadium in Santa Clara for his final Bay Area shows on Oct. 8 and 9.

John’s multiyear Farewell Yellow Brick Road tour had already stopped touched down at a number of Northern California venues in 2019 — Golden 1 Center in Sacramento, Oakland Arena, SAP Center in San Jose and Chase Center in San Francisco. This time around, however, the farewell felt very real.

Following the two Santa Clara gigs, the number of dates left on John’s North American itinerary hit single digits — with only eight left to go. The trek is scheduled to wind up next month, as it should, at the site of one of John’s greatest triumphs — Dodger Stadium in Los Angeles — where he performed a pair of legendary concerts back in 1975. (John then plans to hit Australia and New Zealand in early 2023, before moving onto Europe.)

There was a complicated mixture of joy and sadness in the air as some 50,000 fans packed the home of the 49ers on Saturday night and took in — most likely for the final time in the live arena — hit after hit from John’s deep songbook.

Many fans were having a hard time coming to terms with this being John’s last-ever Bay Area concert stand, explaining to this reporter that they simply weren’t ready to bid adieu to this all-time great. They then went about trying to wring out every bit of joy out of each and every song played.

“We are kind of on the last legs of the American tour,” John said early in the evening. “So, we’d better make these shows count.”

The 75-year-old piano man, born Reginald Kenneth Dwight, certainly made this one count as he provided a wonderful soundtrack for his own goodbye party.

He’d lead his solid six-piece band through 23 songs — including probably a dozen of which rank among the finest pop offerings of the last 55 years — during the approximately 2 ½ hour show.

John kicked off the gig with a rocking version of “Bennie and the Jets,” one of five selections played from 1973 multiplatinum effort “Goodbye Yellow Brick Road.”

His vocals sounded strong, and his piano work even better, as he offered up another uptempo favorite — the 1975 single “Philadelphia Freedom” — before slowing things down with “I Guess That’s Why They Call It the Blues” from John’s best ‘80s outing, “Too Low for Zero.”

These fans, many of whom were wearing blinking-light sunglasses, feather boas, coats of many colors and other Elton-approved accessories and styles, sang along with gusto as the star moved through such beauties as “Tiny Dancer” and “Rocket Man (I Think It’s Going to Be a Long, Long Time).” One of the early highlights was an inspired version of his 1970 debut single — “Border Song” — which John dedicated to Aretha Franklin, whose cover of the song resulted in a Top 40 hit for the Queen of Soul.

He did a really nice job mixing up the slow and fast numbers, ramping up the energy with the likes of “Take Me to the Pilot” and “Funeral for a Friend/Love Lies Bleeding” only to then cool things off with such lovely numbers as “Sorry Seems to Be the Hardest Word” and “Don’t Let the Sun Go Down on Me” — the latter of which may have been the finest offering of the entire show.

He’d close the main set with four consecutive rockers — “The Bitch Is Back,” “I’m Still Standing,” “Crocodile Rock” and “Saturday Night’s Alright for Fighting” — nicely setting the table for a sweet encore that ended, as it should, with “Goodbye Yellow Brick Road.”

What a way to say farewell.

“Bennie and the Jets”

“I Guess That’s Why They Call It the Blues”

“Have Mercy on the Criminal”

“Rocket Man (I Think It’s Going to Be a Long, Long Time)”

“Take Me to the Pilot”

“Someone Saved My Life Tonight”

“Candle in the Wind”

“Funeral for a Friend/Love Lies Bleeding”

“Burn Down the Mission”

“Sorry Seems to Be the Hardest Word”

“The Bitch Is Back”