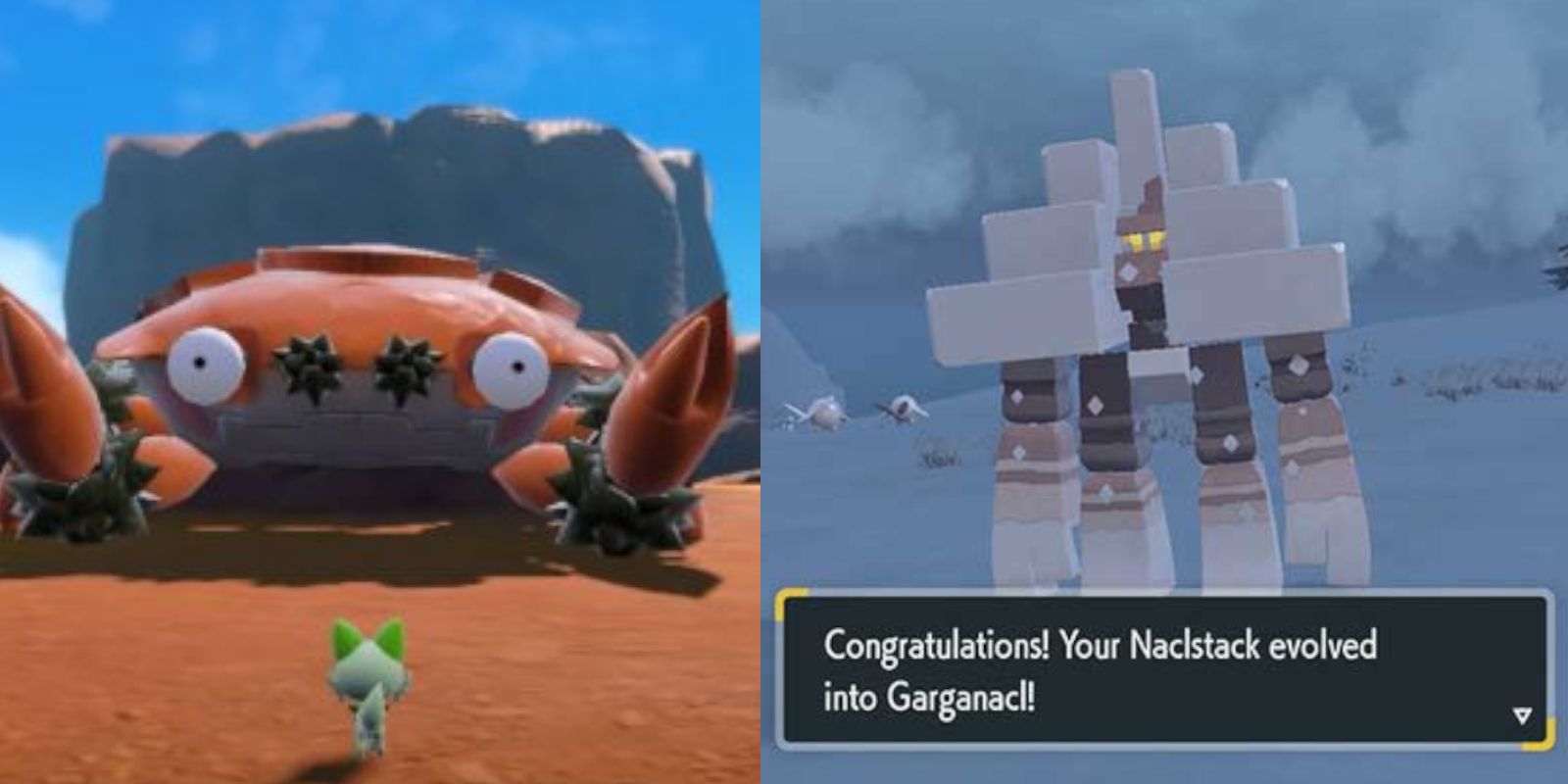 The long-awaited ninth generation of Pokémon has finally been released worldwide with Pokémon Scarlet and Violet, and as fans make their way through the new region of Paldea after coming from Hisui’s past in Pokémon Legends Arceus, there’s undoubtedly a lot to look forward to and experience – and this, of course, includes brand-new Pokémon of all types exclusive to the region.

Paldea’s Spanish roots and inspirations are home to a variety of luscious environments filled with flora and fauna alike, so there are Pokémon of all kinds throughout, including rock types that are found in virtually every corner of Paldea.

Throughout the generations, the series has seen plenty of crab-like Pokémon make up a good portion of the water types as well as populating the seas when surfing. Klawf is a bit different because despite its crab-like form and mannerisms, it’s a Rock type having very little to do with the ocean.

Klawf is native to the Paldea region, and though it’s not known to evolve, it doesn’t necessarily have to. Klawf has more than proved that it’s capable of being a single-form Pokémon as one of the five Titans of Paldea, and with moves like Guillotine and High Horsepower, it can more than take care of itself. To add to Klawf’s ability to be independent, it even has an exclusive ability known as Anger Shell, which activates once health is below 50%. Once this threshold has been met, Klawf’s Attack, Special Attack, and Speed all rise, though it sacrifices a bit of its Special Defense in order to do so.

As an almost literal version of rock salt – further emphasized through the Na and Cl elements in its name that represent salt and chlorine respectively which make up rock salts – Nacli is a cute but fierce little rock found early on in the game, but its capabilities and evolutions allow it to stand the test of time, acting as a formidable Pokémon throughout the game.

Nacli is a highly adaptable Pokémon that’s found virtually everywhere, even well beyond the expected locations of shore sides and deserts. As a Pokémon that’s in ample supply, it’s hard not to give Nacli a try before realizing just how useful and durable it can be, easily making it one of the strongest Pokémon found out in the wild early on into a trainer’s new adventure in Pokémon Scarlet and Violet.

When Nacli evolves into Naclistack, one of the most shocking features it has besides going from a cute small rock to a tank-sized boulder is that it steps away from the traditional curvature of rock formations in favor of a more cut, brick-like shape. It’s easy to make comparisons to the likes of Minecraft when trainers evolve Nacli but its skillset and viability enhances tenfold.

Its biggest benefit is when it learns the move Salt Cure upon evolution, the signature move of both Naclstack and its final evolution, Garganacl. Salt Cure doesn’t necessarily inflict much damage initially, but it continues to chip away at the target’s health with each passing turn indefinitely, additionally doubling damage each turn for Steel and Water types. Even in just its second form, Naclstack is already a force to be reckoned with and can sustain a fair amount of everything thrown at it throughout Paldea.

For trainers that build a bond with their Nacli and Naclstack long enough to reach level 38, they’ll find their party of Pokémon joined by the rock juggernaut Garganacl. Garganacl hugely improves over its already impressive second form, yielding a big boost in defense and move types that diversify the battles it participates in.

Though it steps slightly away from being a pure square, the blocks still remain to a degree as its head is shaped in a pyramid-like fashion, but this increases its weight to roughly ~530lbs/240kg. When it learns the move Heavy Slam at 44 – an attack that increases its power based on the weight difference between the attacker and target – Garganacl can eliminate virtually anything in its path. With TMs, Garganacl can even obtain moves from Steel, Psychic, Ice, Dark, Fire, and Electric types, making it one of the most flexible rock types around as a Pokémon with one of the highest defense stats in Pokémon Scarlet and Violet.

Over the last few generations, Rock types have been granted flexible hybrid typing that can make them withstand more rather than being an easy target for Water types. In the case of Glimmet, this Rock/Poison type Pokémon has an extremely unique design atypical of Rock types that immediately makes it stand out, though it may be hard to see when running through a cave as it is rather small.

Thanks to Glimmet’s Rock/Poison type, it has a move set as it levels that can grant it moves that equal part pummel and cripple as the rock takes out health in chunks while the poison chips away between turns, even extending beyond to other party members. It’s rather difficult to level up at first, however, so some trainers may find it initially to be a disappointing new Pokémon in Generation IX, though Glimmet is capable of so much once it evolves, rewarding the work trainers put into it.

Glimmet can level up rather slowly, and given how fragile it is it can be tough to evolve in the lead of a party without Exp. Candy, but for trainers that persist until level 35, Glimmet blossoms into the mineral ore Pokémon known as Glimmora. Glimmora’s biggest benefit aside from being a Rock/Poison type that can chip away at health while simultaneously taking hits thanks to a high defense is its unique move Mortal Spin, which only Glimmora can learn in Pokémon Scarlet and Violet.

Mortal Spin is a Poison-type move that predictably poisons the target in an excruciating fashion, but has the added benefit of getting out of restrictive situations caused by the likes of Bind, Wrap, and Leech Seed. Typically, Pokémon caught in these moves have to deal with the effect almost indefinitely, but Glimmora has the upper hand thanks to Mortal Spin, allowing it to safely be freed from the shackles while dealing damage and poisoning the target.

Iron Thorns is one of many Paradox Pokémon to be introduced in Generation IX taking on the forms of past and present versions of currently existing Pokémon, yet standalone as an entry in the Pokédex. Though Iron Thorns takes on the image of a Tyranitar – almost serving as a futuristic interpretation of it – it acts as an exotic combination of both Rock and Electric, whereas Tyranitar is a Rock and Dark type having been around since Generation II. The dichotomy of past and future implemented into the games gives a brand-new perspective to the Pokémon of yesteryear that would have also fit perfectly as a Pokémon to have in Pokémon Legends Arceus.

A lot of the Paradox Pokémon found in Pokémon Scarlet and Violet aren’t typically revealed until the end of the game, so trainers will have to invest some time before coming across these special mythical Pokémon that come from the ancient past in Pokémon Scarlet and distant future in Pokémon Violet. Trainers will also find similarities in how Paradox Pokémon are linked to Paldea as Ultra Beasts were to the Alola region in Sun and Moon as they both play a large role in the story, cannot breed, and have relations to other legendary Pokémon. In the case of Iron Thorns, it has an absolutely vicious list of moves that include the likes of Giga Impact, Earthquake, Stone Edge, and Wild Charge that are complemented further by a wide array of adaptable TMs that can be taught to Iron Thorns, making it one of the most terrifying Rock Pokémon throughout every generation of Pokémon combined.