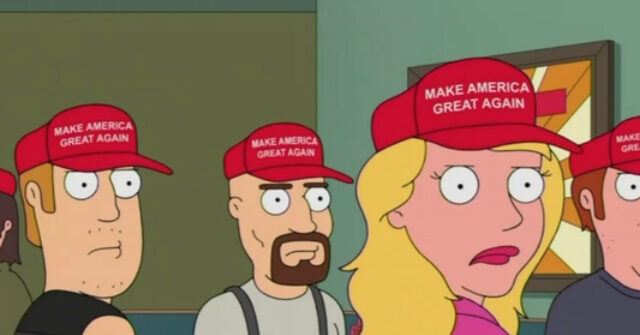 Sunday’s episode followed the Griffith family on a cross-country road trip to Oregon to visit the last Blockbuster Video store. Along the way, they stop at a Midwestern diner where they find themselves surrounded by MAGA-hat-wearing Trump supporters.

The show tipped its hat to the final scene of The Birds as the Griffith family slowly retreats to their car, their moves watched by an endless sea of Trump supporters who take turns squawking “Trump.”

Watch below via MRC:

Family Guy has taken repeated shots at Donald Trump and his supporters over the years, including an episode just after the 2020 election that imagined then-President Trump, his wife Melania, and Vice President Mike Pence hanging themselves in prison.

In an episode that aired the year before, Peter Griffin becomes Trump’s press secretary and witnesses the Trump character assaulting his daughter, Megan Griffin, by grabbing her genitals.

Family Guy creator Seth MacFarlane has made no secret of his loathing of Trump. As Breitbart News reported, MacFarlane has reportedly emerged as one of Hollywood’s biggest supporters of House Speaker Nancy Pelosi (D-CA), recently donating a hefty sum to a PAC affiliated with the 17-term politician.

In 2020, MacFarlane signed a $200 million deal with NBCUniversal under which he jumped ship from his longtime home at 20th Century Fox Television.