“Anyone can be chosen.” Netflix has revealed an official trailer for The Wonder, a new drama from Chilean filmmaker Sebastián Lelio (of A Fantastic Woman, Disobedience, Gloria Bell) that first premiered at the Telluride Film Festival. A tale of two strangers who transform each other’s lives, a psychological thriller, and a story of love pitted against evil. Starring Florence Pugh, and based on the book by Emma Donoghue, writer of Room, The Wonder is the tale of a young Irish girl, Anna O’Donnell, whose Catholic family claim she has eaten nothing since her eleventh birthday… four months ago. It’s set 13 years after the Great Famine in the 1800s in Ireland. In addition to Pugh, the main cast includes Tom Burke, Niamh Algar, Elaine Cassidy, Kíla Lord Cassidy, Toby Jones, Ciarán Hinds, Dermot Crowley, Brían F. O’Byrne, and David Wilmot. This looks like a very intriguing film about religious faith and women and love. Get a look.

Here’s the official trailer (+ poster) for Sebastián Lelio’s The Wonder, from Netflix’s YouTube: 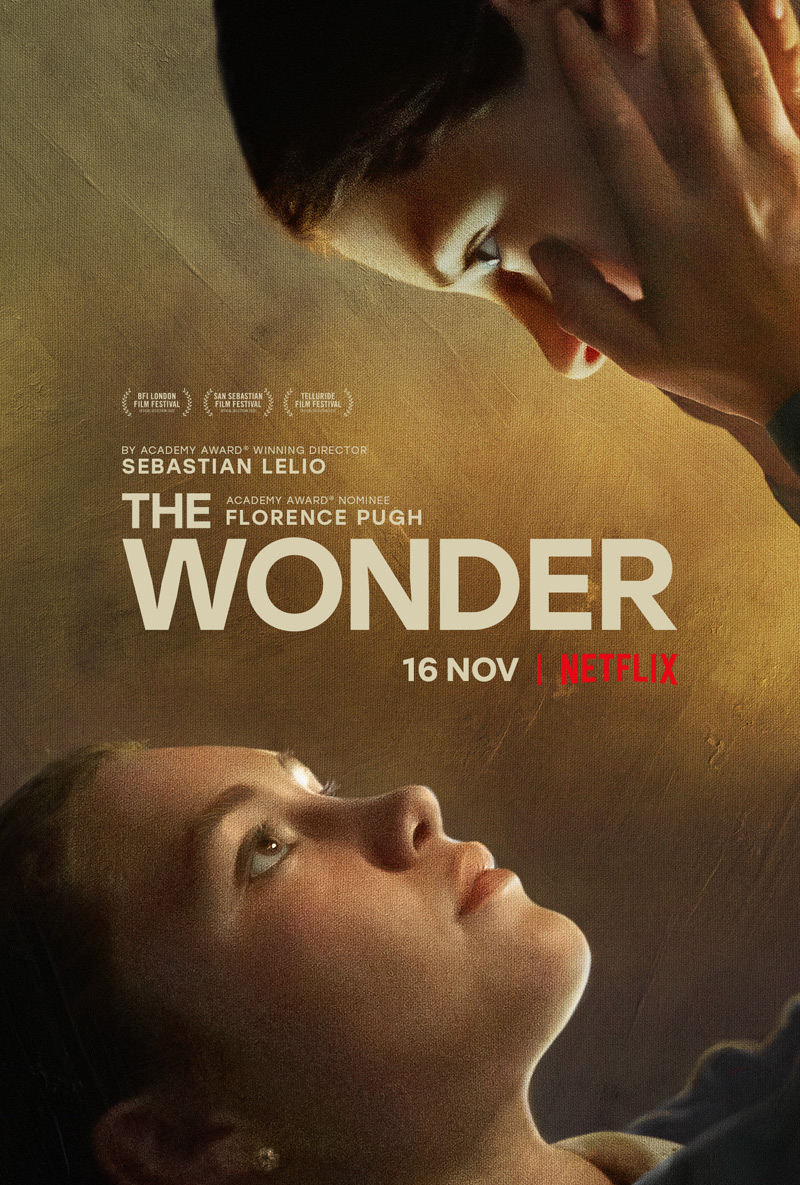 Ireland, 1862. 13 years after the Great Famine. An English Nightingale Nurse Lib Wright (Florence Pugh) is called to the Irish Midlands by a devout community to conduct a 15-day examination over one of their own. Anna O’Donnell (Kíla Lord Cassidy) is an 11-year-old girl who claims not to have eaten for four months, surviving miraculously on “manna from heaven”. As Anna’s health rapidly deteriorates, Lib is determined to unearth the truth, challenging the faith of a community that would prefer to stay believing. The Wonder is directed by acclaimed Chilean filmmaker Sebastián Lelio, director of the films The Sacred Family, Navidad, The Year of the Tiger, Gloria, A Fantastic Woman, Disobedience, and his own remake Gloria Bell previously. The screenplay is written by Alice Birch and Sebastián Lelio; adapted from the novel of the same name by Emma Donoghue. This initially premiered at the 2022 Telluride Film Festival, and it also played at TIFF and San Sebastian. Netflix will debut Sebastián Lelio’s The Wonder in select theaters on November 2nd, 2022, then streaming on Netflix starting on November 16th this fall. Who’s interested?