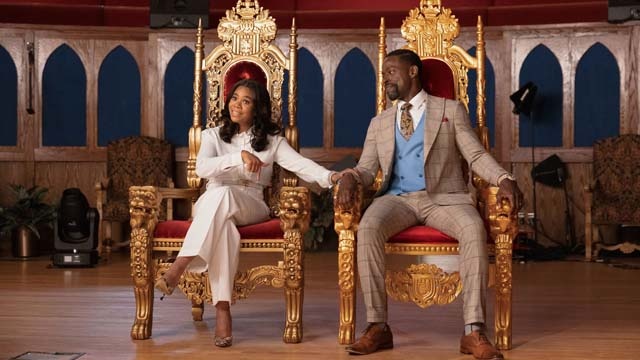 Honk for Jesus. Save Your Soul. is a satire from first time director Adamma Ebo and stars Regina Hall, Sterling K. Brown, Nicole Beharie, and Conphidance.

In the film, Pastor Lee-Curtis Childs (Brown) and his First Lady Trinitie (Hall) are trying to resurrect their megachurch after a scandal forces them to close their doors. After multiple settlements, they try to reach the popularity they once had. Will they be able to open their doors on Easter Sunday? And will their marriage survive?

There have been many mockumentary-style satires through the years: District 9, Best in Show, Borat, A Mighty Wind, and Tour de Pharmacy. They give audiences a peak behind the curtain into a controversial or niche subculture. The scripts poke fun at the tropes and reoccurring themes which pop up in those cultures. Satirical mockumentaries are nuanced with each scene written and framed deliberately in order to portray and showcase specific messages. There is a balance to be made with these types of films. It has to feel real while showing deliberately ridiculous behaviors. It has to be low budget but not feel “too low-budget.” Honk for Jesus is able to balance all of these things.

In Honk for Jesus, the social commentary centers specifically around the idea (and ideals) of the megachurch. Director Ebo focuses on specific aspects: the financial gain from the leaders of megachurches, the dramatic rise and fall of megachurch preachers, Southern church communities, traditional Southern culture, and even the clash between the traditional and more modern forms of dress and worship.

The acting is superb with subtle and nuanced deliveries from everyone in the film. Regina Hall gives a powerful performance as a woman who has to deal with so much on her shoulders. Sterling K. Brown lights up the screen with his eccentric and boisterous portrayal of a megachurch pastor looking for his own resurrection.

One thing the protagonists don’t have to deal with (despite all of the settlements and cost of reopening the megachurch) is with any financial worry, which could have easily added more tension and stakes. The scandal that has taken place is a bit of a mystery, as it is hinted at through the first half of the movie but is never overtly admitted by anyone. It quickly becomes obvious through Childs’ actions (and Trinitie’s reactions) what the scandal was about and yet, no one will say the actual words, which would have also added to the stakes. Admittedly, this says a lot about Southern culture and about Christian culture: a lot lies between what is said and what isn’t. Unfortunately, it would have been more impactful if handled more explicitly in this case.

Throughout the film, Ebo hints at various themes and issues, but she never commits to any, which makes the film feel unsatisfying after the end credits roll. But while stories in Hollywood films are often wrapped up neatly with a bow, should mockumentaries fall in line with those story methods? Rarely in life do problems resolve in such a way. But then, even with documentaries, filmmakers still must remember they are making a film and telling a story.

For those in the LGBTQ community, there is somewhat of a triggering sermon made about a third of the way through. In the vein of mockumentaries, every scene and every speech are made with a purpose and this scene is no exception.

Honk for Jesus is an interesting mockumentary satire that feels a little too scared to stick the landing. With more conviction, this film could have made a statement as bold as its characters’ personalities. Despite the amazing acting, viewers may feel unsatisfied and unaffected when leaving the theater.