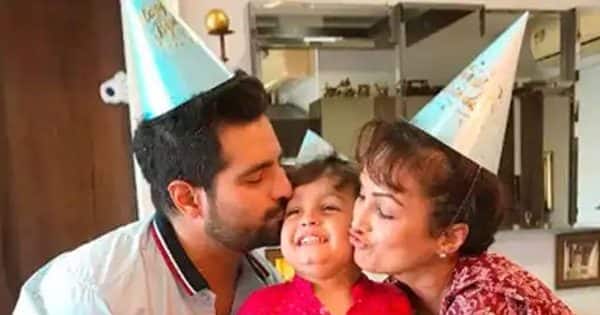 Karan Mehra and Nisha Rawal have been going their bitter separation ever since the actress filed a domestic violence complaint against her husband last year. He was arrested by the police but had later been let out on bail. While the estranged couple are fighting their legal battle, Karan broke down while talking about having no information on his son Kavish for the past year. Also Read – Karan Mehra would love to have live trial like Johnny Depp and Amber Heard case: ‘They are calling me Johnny’

“Nobody has any clue and my neighbour also does not see him. The frequency of them spotting my son has become zero this entire year because they don’t see him anywhere. I don’t know what all he is going through. But I think I will meet him very soon. Divorce is still in process,” Karan told Siddharth Kanan. Also Read – Sana Amin-Aijaz Sheikh, Nisha Rawal-Karan Mehra: SHOCKING splits of these TV celebs left fans heartbroken

Karan further revealed that it’s been 15 months since he met his son. The last time he met Kavish was a day before Diwali last year and they interacted for merely 5 minutes. He said he has spent his and his son’s two birthday’s alone and there has been no communication since then. Also Read – Rupali Ganguly-Sudhanshu Pandey to Divyanka Tripathi-Karan Patel: Cold wars between these onscreen TV couples left fans in shock

The Yeh Rishta Kya Kehlata Hai star also said that his son Kavish has become afraid of cameras which is strange since he loved being in front of cameras. Talking about his legal battle, Karan said that all kinds of pressure have been added whether it is financially, physically or mentally but he has chosen to fight.

“I am fighting alone. I stand alone today and I fight all odds because it is for my parents and my brother, my son. What kind of a father, brother or son would I be if I do not fight for them?” he added.

On June 25, 2021, Nisha had made allegations not just against Karan but also on his family members Kunal Mehra, Bela Mehra and Ajay Mehra. Apart from allegation of violence against Nisha, the complaint states Karan withdrew over Rs 1 crore from her bank account. In a press conference, Nisha subsequently had also made accusations of extra-marital affair against Karan.