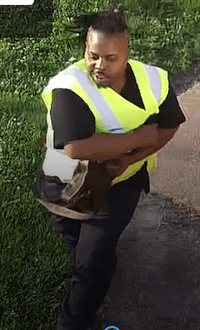 ST. LOUIS – Detectives with the St. Louis Police Division are in search of a person accused of robbing any other guy at gunpoint Tuesday after a staged supply.

Police say the location opened up round 7:40 p.m. Tuesday within the 2300 block of McCausland Road within the Ellendale group.

Investigators say the sufferer, a 68-year-old guy, used to be strolling into his rental construction when he used to be approached by way of a person sporting packing containers. That guy requested the sufferer to open the door so he may ship programs. When the sufferer adopted his request, the suspect reportedly confirmed a handgun and informed the sufferer to get at the floor.

The suspect is described as a person in his 30s round 5 ft, 8 inches tall and 220 kilos. He used to be described as having a medium complexion and a Mohawk haircut. Surveillance pictures captured the suspect dressed in a yellow protection vest.