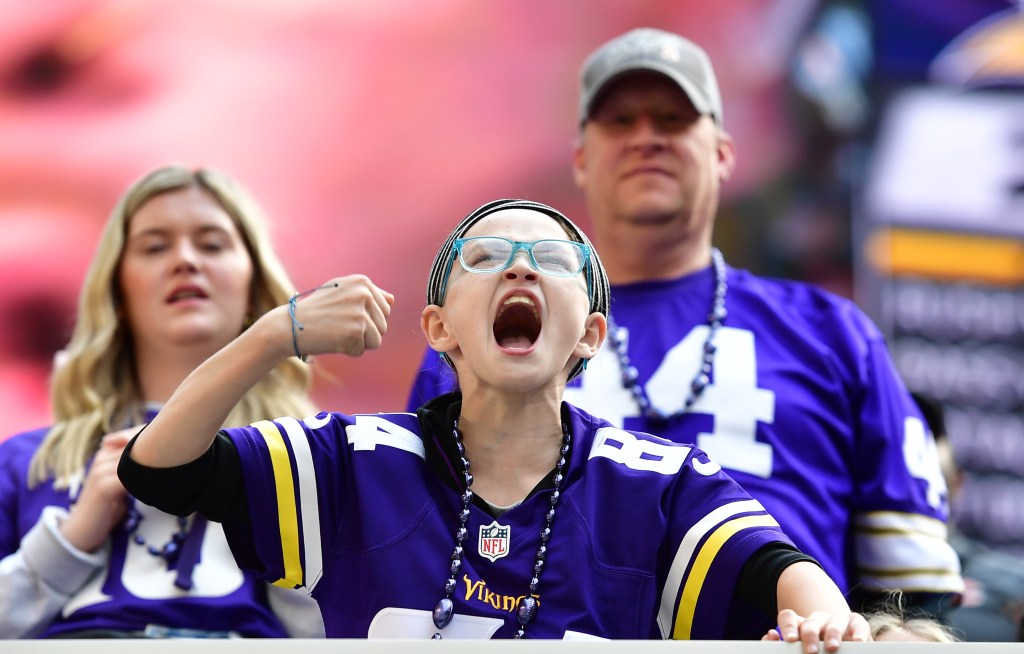 Because Minnesota sportsmanship is a half-empty thing, a decent chunk of Vikings nation likely walked away from Sunday’s 29-22 win over the Chicago Bears believing their team’s 4-1 start was something of a mirage.

The Vikings may have won three straight and sit atop the NFC North with a 3-0 record, but they’ve been living on the edge against teams already thought to be below them. While they pretty much pummeled Green Bay early in the season, the Vikings needed a fourth-quarter rally against the Bears, Detroit Lions and New Orleans Saints.

Surely the cautious believe all this will catch up with Minnesota’s snake-bitten NFL franchise.

“We don’t live on the edge. We play ball,” the Vikings tailback said. “Plays are made when they have to be made.”

Cook ran 18 times for 94 yards and a pair of touchdowns Sunday, making, as he noted, plays when needed. In the Vikings’ 17-game winning streak, Cook ran six times for 23 yards, including one of the team’s six first downs.

Vikings fans should too.

“Are we where we want to be as far as how we play?” veteran safety Harrison Smith said. “No, but we win and in the end that’s all that matters. We need to get better in some areas but we will enjoy these victories; they are hard to find.

Anyone who might or might read this remembers the previous two seasons when Minnesota limped out of the gate and spent the rest of the season struggling with themselves as much as their opponents. After five games, we can unequivocally say that in their first season under head coach Kevin O’Connell, the Vikings are better than last year. Who cares if the team they beat is 8-12 overall? The Vikings lost to previously winless Detroit on December 5 of last year.

Beating the teams you need to beat is a prerequisite for good football teams, and if you’ve been paying attention to the first five weeks of the NFL season, you know most of the games are close. As Smith said, “Things happen that you think shouldn’t happen.”

Should the Vikings have smoked Chicago on Sunday? Perhaps. They led 21-3 after two quarters but trailed 22-21 with 9 minutes, 31 seconds left. Then they made plays when they needed them, capping a 17-play, 75-yard drive with Kirk Cousins’ 1-yard sneak, then scoring on Justin Jefferson’s two-point conversion pass.

When the Bears showed they weren’t going to lie down, cornerback Cameron Dantzler stole the ball from former Vikings wide receiver Ihmir Smith-Marsett on a 15-yard reception — and had the presence of mind to swipe an inbounds so Minnesota could run out the clock by taking a knee .

Even when the Bears clawed their way back into the game and took the lead, there was a sense that Chicago’s shortcomings would ultimately cost the Bears. Not the Vikings’ flaws, the Bears’ flaws. Here’s how far the Vikings have come in a few games. This is progress.

Minnesota won’t be on the board this season, but the Vikings should be the heavy favorite to win the NFC North. It’s a playoff spot and maybe a bye. It’s still out there for the Vikings to take.

“I don’t think it’s fair to say we’re where we want to be. It’s so early in the season,” Kendricks said. “But we do good things. Being 4-1 in the league is (terribly) tough, you know what I mean? Looking back on it, we put in a good job.

“We’ve been in a lot of situations where we can learn from, but no, we’re not where we want to be. We have to get better; we know that.

Being able to say that while going undefeated against NFC North opponents is a luxury, but the Vikings have paid. They have built up some capital here. This should buy, if not complete optimism, some confidence.

“If you can learn when you’re winning, that’s great,” Smith said. “It doesn’t happen all the time. I think it shows how good we can be. We’re just scratching the surface.”

Go ahead, trust him.