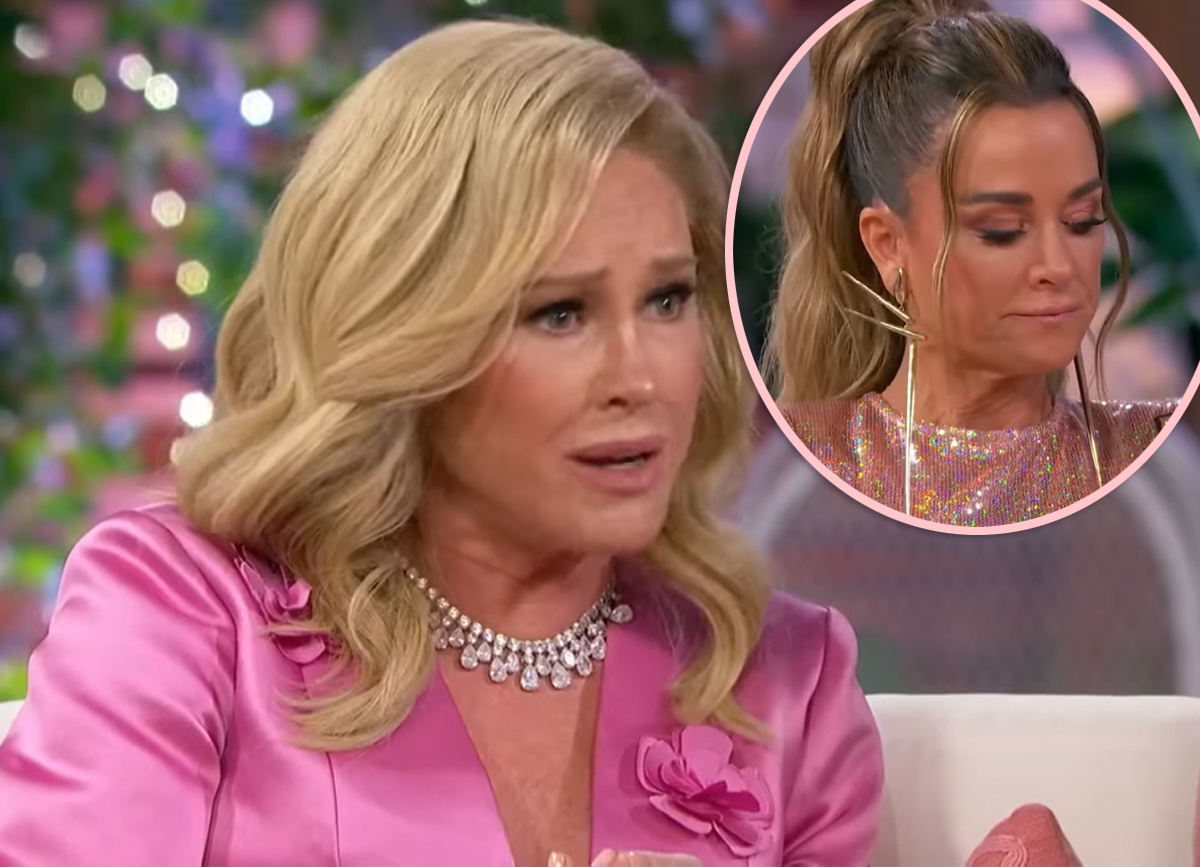 Uh-oh. It sounds things are not good between Kathy Hilton and Kyle Richards right now!

The two sisters’ relationship has had its fair share of ups and downs over the years – but it sounds like their rivalry has come to a head during season 12. As Bravo fans may recall, during a Real Housewives of Beverly Hills cast trip to Aspen, Kathy had a complete meltdown after the other women started drinking a competitor’s tequila at the bar and would not join her conga line. Lisa Rinna ended up having to take the 63-year-old reality star home. When the two women got into the car, that is when all hell broke loose and Kathy went off about her cast members – specifically Kyle. Lisa recalled:

“We get in the sprinter van and Kathy starts screaming about everything, and she’d say things like, ‘I’m gonna take down NBC, Bravo, I will take down the show single-handedly. I will f**king ruin you all!’What in the holy f**ing hell?”

Related: Erika Jayne Claps Back At Jennifer Lawrence For Calling Her Evil!

“She takes her glasses off, she throws them on the ground, she’s jumping up and down, breaking her glasses, she’s pounding the walls and she’s screaming she ‘made’ Kyle… Kathy’s responsible for Kyle and she said, ‘I will destroy Kyle and her family if it’s the last thing I ever do.’”

A preview for the RHOBH reunion showed that things only got more intense when Lisa went off on Kathy for trashing the cast and Kyle. We even see the Halloween star in tears at one point while talking about the situation! Oof! Whatever drama unfolded between Kathy and Kyle over the course of the reunion must have been explosive as TMZ reported on Saturday that they are barely speaking to each other at the moment! Production sources claimed Kathy “unraveled” on set, where she had a huge confrontation on and off camera with her sibling that was “so shocking it was hard to watch.” At one point, the insider claimed Kyle walked off the set looking distraught after exchanging some nasty words with Kathy.

Now, the pair are almost unable to talk to one another and have only reached out over text a few times since filming last month. In fact, things are so bad between the pair a source for People believes Kyle and Kathy “cannot reconcile” after what happened at the reunion!

“It’s all so complicated because nobody’s backing down. Kyle has backed up her sister for years and no matter what she does, Kathy isn’t satisfied. What we’re watching is years of family trauma that hasn’t been dealt with in a family dynamic.”

While the duo has always had a fractured relationship, the source noted that it is “complicated” since this is the “first time” Kathy’s daughters – Paris Hilton and Nicky Hilton Rothschild – have had to get in the middle:

“They all grew up together. Kyle acted as a spokesperson for the Hilton family for a long time. They always make up, but this is a little different because Kathy is front and center on camera. She hasn’t been forced to be vulnerable.”

We’ll have to wait and see what happened on the reunion between Kyle and Kathy! Thoughts, Perezcious readers? Do you think they will be able to repair their relationship? Sound OFF in the rivalry in the comments below.