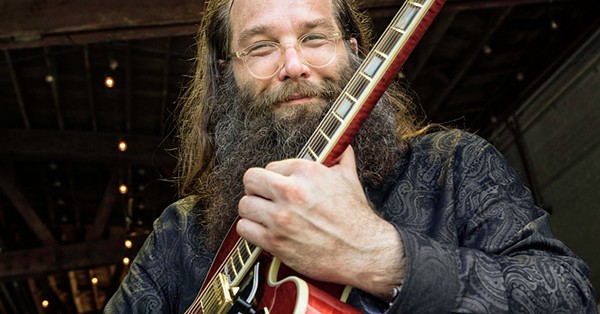 For Laith Al-Saadi, these are the best of times, these are the worst of times. One of Southeast Michigan’s best-known and hardest-working musicians, the Ann Arbor native will combine his annual pre-COVID birthday with a 5:15 p.m. performance Saturday during the second annual CannaJam festival at Riverside Park near Ypsilanti.

“This is the first event I’ve been involved in where a public park has permission to consume cannabis on-site while I’m performing, so I’m excited about that,” said Al-Saadi, a long-time vocal advocate for legalization. “I mean, I’m the guy who plays the national anthem to start every Hash Bash. It’s time to stop locking people in cages for using a plant.

Sounds like it’s one of his best moments. But what kind of audience response is he expecting? “It won’t be any different than normal,” he predicted, sounding slightly offended. “Honestly, cannabis makes the music more enjoyable, so I think people will be just like they would be at any concert. Depending on who you go to, they all smoke anyway and have for years.”

It’s been six years since Al-Saadi, who graduated in jazz guitar and bass from the University of Michigan, wowed viewers around the world with his blues-infused musical gifts by reaching the Season 10 finale of the NBC competition series The voice. As you can imagine, this kind of exposure led to some of the best times of his career.

“I was a finalist on a show that had over 16 million viewers watching it live every week, excluding people from other countries and those who just watched the highlights online,” he recalls. “I was finally able to work at a professional level that was not only national but quite high.”

Al-Saadi, who played more than 300 concerts a year for 20 years and was once the Detroit Lions pep band singer, couldn’t help but enjoy his voice recognition. “People paid for tickets to see me, and I could put on a show the way I wanted to as an artist,” he says. “I was no longer playing where drunk people were shouting for me. If I play a cover (song), it’s because I wanted to do it artistically. I could play all the original songs and it was well received because they were there to see my music. As an artist, that’s a level you have to rise to and you don’t want to give up.”

Unless it’s ripped away from you. Like in 2020, after our former president Mar-a-Lardo assured us that a small virus strain from abroad would be gone by spring, like the flu. Three years and over 1 million US deaths later, many segments of American life are still in chaos today — perhaps none more evident than the live music scene in clubs and concert halls across the country.

Name this part of the “worst of times”.

“You know, the last three years have probably been the worst of my life,” Al-Saadi reflects. “The world closed down. COVID has so destroyed the industry that it’s hard to keep going when people don’t show up.”

As he earns his living by playing music, Al-Saadi is forced to remain unemployed. “Since I was 16, I’ve known nothing but performing,” he says. “And streaming has ruined physical sales so much that we can’t even make a profit from being studio musicians. As they say in the music industry now, you don’t tour in support of your album anymore; you’re making the album to support your tour. And when you’re locked in your basement, nobody’s going to buy a ticket to see you play.”

Al Saadi’s latest album, real, hit No. 1 on the iTunes blues chart and stayed there for five weeks. His next album with the ironic title Don’t give up on me, featuring such studio legends as drummer Jim Keltner (“my hero,” enthused Al-Saadi), New Orleans bassist Kenny Gradney and the late keyboardist Mike Finnigan (Big Brother & the Holding Company), has been under wraps for years. “I’ve invested more than $40,000 of my own money and I can’t let it go and not go around behind it to make some money,” he explains.

As his semi-important 45th birthday approaches, Al Saadi is philosophical. “Life has already passed us by too much,” he reflects. “I’m not ready to give it up any more to be scared because you never know how much time you have. This is what turning 45 really makes me lament that there was so much more I wish I had accomplished in the past few years.

He adds: “Again, I can’t encourage people enough to get out and support live music. Just remember that with the exception of the really big acts, the artists who have not recovered are those who make a living from touring. That’s why I’m so excited about the return of live music.”

In addition to the CannaJam appearance, Al-Saadi has a date with his “Large Band,” featuring the Motor City Horns and legendary Nashville blues instrumentalist Al Hill, at 7:30 pm on October 22nd at the Macomb Center for the Performing Arts . His website, laithalsaadi.com, has more information.

Oh, and in case you’re thinking of sending a card or wish on social media, Al-Saadi’s 45th birthday is actually Wednesday, October 5. “But for CannaJam,” he smiles, “that’s close enough.”

CannaJam Fest runs from noon to 10pm on Saturday, October 8 at Riverside Park; 2 E. Cross St., Ypsilanti; cannajamfest.com. Tickets start at $35; 21 and over only.