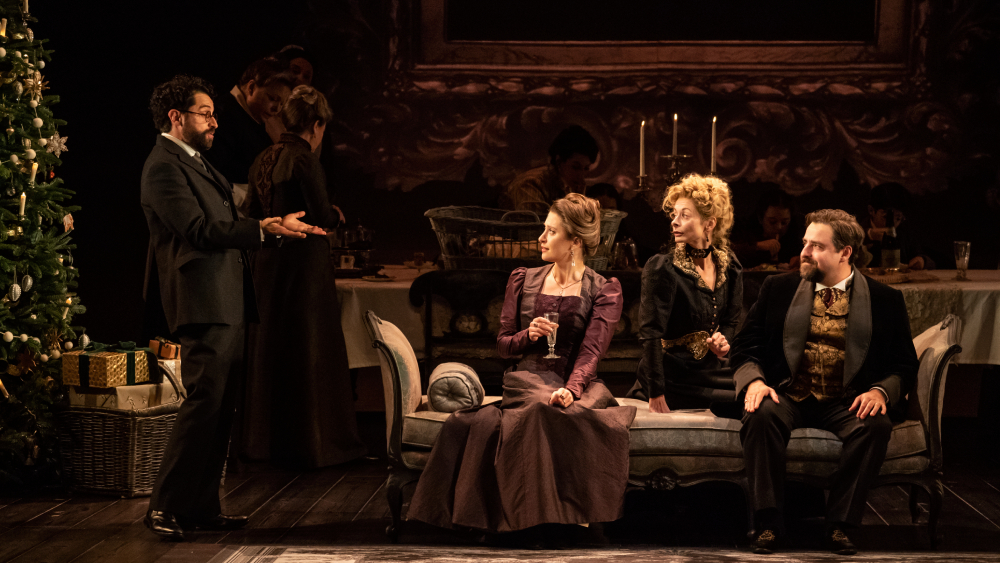 In a radical departure from his usual intellectually esoteric style, Tom Stoppard’s new play is an intensely personal family drama.

“Leopoldstadt,” which takes its name from the Jewish quarter of Vienna, doesn’t concern itself with quantum mechanics, metaphysical mysteries, Heisenberg’s Uncertainty Principle or Fermat’s Last Theorem — all topics the playwright has tackled in previous plays. But because it follows the disintegrating fortunes of a close-knit Jewish family (and their goyish relatives by marriage), it does deal, in its way, with chaos theory.

The set (Richard Hudson, with a shout-out to the props team), costumes (Brigitte Reiffenstuel) and especially the lighting design (Neil Austin) bathe the first scene in an aura of domestic harmony. It’s 1899 and almost Christmas in Vienna. Everyone in the tastefully furnished Merz household appears to be approaching the 20th century with glad hearts. The family trade is prospering, the men are successful businessmen and academics, the women are smart and articulate and the children are well-behaved.

Best of all, they are living in the artistic and cultural center of the European universe. The Mertzes are planning to attend the grand Exposition in Paris and having a good laugh about Gustav Mahler’s plan to take the entire Vienna Philharmonic to Paris “to annoy the French.” Such is the idyllic life in this blended family; when someone’s little boy mistakenly places the Jewish Star of David atop the beautiful, if distinctly Christian Christmas tree, it’s cause for great merriment.

Grandma Emilia, the matriarch of the family played with whiplash wit by Betsy Aidem, has a snappy comment about that: “Poor boy, baptized and circumcised in the same week, what can you expect?”

Her son, Hermann (quite pleased with himself, but so vulnerable in David Krumholz’s performance), is socially ambitious and something of a snob.  Proud to be living in the most sophisticated city in Europe, he honestly believes that his wealth and bonhomie can get him past the Jewish thing and inducted into the prestigious Jockey Club. “We’re the torchbearers of assimilation,” he boasts. (The scene in which he learns otherwise left me shaken.)

Herman’s wife, Gretl (a gorgeous performance from Fay Castelow, from the London production), is so beautiful and vivacious that a young painter asks her to pose for the portrait that hangs on the rear wall of the living room for much of the play. Gretl and her tantalizing portrait figure largely in the plot, but unobtrusively so, under Patrick Marber’s almost mathematically precise direction.

Speaking of mathematics, Hermann’s sister, Eva (Caissie Levy), is married to Ludwig (Brandon Uranowitz), a math guy (a numbers theorist, to give him his due) who is scornful of applied mathematics and takes a worshipful attitude to his own field. “Numbers are a huge toy box,” he says. “We can play with them and make amazing, beautiful things.” You might say the same thing about language, another of Stoppard’s passions.

A year later, everyone in this ideal family seems to be having affairs and stealing one another’s lovers. But by 1924, the mood has turned grim – not only for the Mertzes, but for all of Europe, which has gone through a devastating war. Ludwig’s only son was killed in battle, and Jacob, the son of Hermann and Gretl, came home missing an eye and a leg.

In a harrowing performance by Seth Numrich, Jacob is a haunted shadow of a man. “He’s hollowed out,” his father says – a line that should put to rest Stoppard’s unfair reputation as a brilliant but “chilly” writer. The intermarriages have become much more complicated by now, but the open-hearted family welcomes its “meschlings.”

Although no one in this household seems to have noticed, Austria has been infected by a pernicious brand of politics. It takes an outsider, a goy banker, to name this creeping threat for what it is. “The class war turns people against each other,” he observes, “but nationalism bands them together.” And hyper-nationalism turns them into a mob, he might have added.

Dramatic set changes – by 1938, the family’s gracious home seems shabby and their clothing appears well-worn – indicate that Vienna has been infected by a pernicious brand of nationalism that imperils its Jewish population. Still blinded by their faith in their artistic and intellectual homeland, the Mertzes refuse to see what’s before their eyes. But we who know the past can see their future, which Stoppard reveals in a coda set in 1995 – and leaves us shattered.