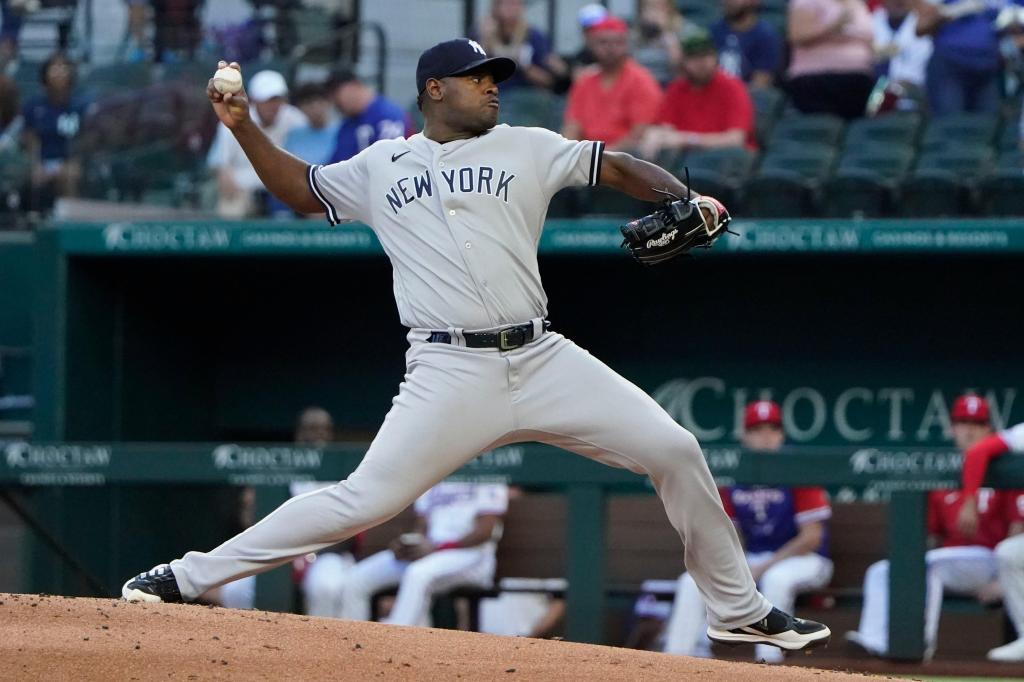 ARLINGTON — Luis Severino was not happy and neither were most of the fans at Globe Life Park Monday night.

Despite the Yankees pulling out a 3-1 win over the Rangers, nobody got what they really wanted. Aaron Judge did not hit a home run for the fourth straight game and remains tied with Roger Maris for 61, the most ever hit by an American League player. Severino was throwing a no-hitter after seven innings when Aaron Boone had to take him out.

The Yankees (98-61) have three games left for Judge, who went 1-for-4 with a strikeout, to try and best the 61-year old record with Maris’ children and his family watching. Severino was solid in his outing, but it was the move Yankees’ manager Aaron Boone had to make.

While Severino wasn’t happy, he understood.

“I was trying to  fight him, but you can do nothing about it,” Severino said of Boone’s decision. “He told me ‘What you think?’  I said I’m gonna die out there. But it was not a good idea to go out there and push it to 115 pitches.”

Severino was making his third start after missing two months with a lat strain. The right-hander insisted he felt good enough to come back sooner, but the Yankees have been very careful with him due to his previous bouts with serious injuries. Boone let him just go over the 90 pitches he was scheduled for, but wasn’t going to take him to 120-130 that he would need to finish the game.

After Severino struck out Nathaniel Lowe to end the seventh inning, Boone met him at the dugout stairs. With both his hands on Severino’s shoulders, Boone continued talking and Severino kept turning his head away and would not look at his manager.

“I mean, nobody wants to be taken out or take you out in that situation. I understand, you know, I’ve been out for a couple of months. I think I throw 90-something pitches. And the start before this one was like 70-something, so I think it was a good decision,” Severino said. “I don’t want to go out there and kill myself and not be good for the postseason.”

Severino pitched seven shutout innings. He walked one and struck out seven. He was brilliant throwing 94 pitches and getting 13 swings and misses. His fastball touched 100 miles per hour, without much effort. He went to a full count just seven times all night and Josh Smith needed a nine-pitch battle before earning a walk in the third. He was Severino’s only baserunner.

And Severino believes he would have gotten the no-hitter if could have gone on.

“One thousand percent,” he said. “To get a no-hitter is tough. You need all your guys up there. How I was feeling, how the fastball was, I feel like I would have.”

He’s allowed three runs and struck out 17 batters over 16 innings for a 1.69 ERA since returning from the injured list.

“Terrific I mean the stuff was all there. His changeup’s become such a good pitch for him. I think that’s one of the things [to come out of] the injuries he’s had over the last couple of years,” Boone said. I think one of the beauties of that is it’s made him really develop that changeup to become a really good pitch for him and it’s a pitch he has a lot of confidence in.

“Obviously his fastball and slider are calling cards for him, but that changeup becomes such a good third pitch for him,” Boone continued. “And I just thought he was he was great again tonight. It’s been really exciting to see what he’s been off the IL with three, I think, really excellent starts.”

It was his final start of the regular season and it was a good prep for the playoffs, but it was a kind of disappointing night.

“I mean it puts a little damper on the night, honestly, that it’s not a fun thing to have to do when a guy is pitching the highest league in the land and he’s out there doing his job at a really high and special level,” Boone said. “And to have to be the one that shuts that down, it’s not fun to do.”