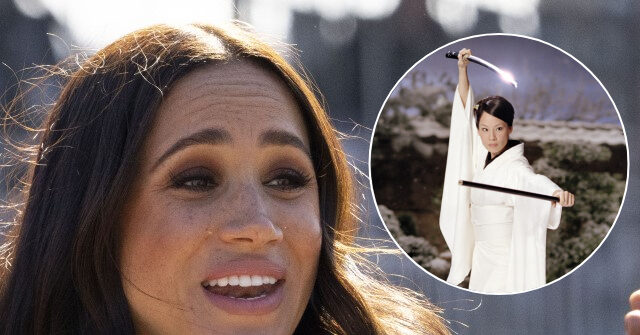 “Movies like Austin Powers and Kill Bill, they presented these caricatures of women of Asian descent as oversexualized or aggressive,” Markle said in the Tuesday episode of her Spotify podcast series Archetypes. “And it’s not just those two examples, there’s so many more.”

During the episode, Markle spoke to actress Margaret Cho about the so-called “Dragon Lady” stereotype.

“‘Dragon Lady’ comes from this — fantasy of orientalism,” Cho said. “It’s similar to the ‘femme fatale,’ in that a woman who is beautiful and deadly, because we can’t just be beautiful. It has to come at a cost.”

“It’s also so pinned to this idea that Asian-ness is an inherent threat,” the actress added. “That our foreignness is somehow ‘gonna getcha.’”

Markle went on to say that “this toxic stereotyping of women of Asian descent, it doesn’t just end once the credits roll.”

Cho also claimed that she grew up never feeling properly represented in film and television.

“I never saw Asian people in [movies and television],” she said. “So, I never felt visible. I never felt seen anywhere. And then later, I guess, I started to go into silent films, and I started to realize, ‘Oh, this is actually like an archetype, this archetype of the ‘Dragon Lady.’”

Recently, it was revealed that Markle hired a fact checker for her podcast series, Nicole Pasulka, a U.S. writer whose views closely mirror her own.

Archetypes recently resumed after a brief pause so that Markle could put on a public display of mourning for her grandmother-in-law, Queen Elizabeth II — a move which prompted the hashtag #GoHomeMeghanMarkle to trend on Twitter, with royal fans accusing the Duchess of Sussex of hypocrisy — given that she has renounced her royal obligations and trashed her in-laws in the news media.

Last month, Real Housewives of New York City star Bethenny Frankel slammed Markle over the manner in which she is handling her public image, calling her “polarizing,” and saying “she really is fucking it up” and “becoming a woman without a country.”

“She’s very much like a housewife in that she can’t stop talking about the very thing that she wants to be irrelevant [the Royal Family],” Frankel said.

Recently, Markle claimed on her Archetypes podcast that people only started treating her “like a black woman” after she started dating Prince Harry. The Duchess of Sussex has also tacitly threatened to “say anything” about her time in the U.K. after she and Prince Harry left the Royal Family for a new life in the United States.