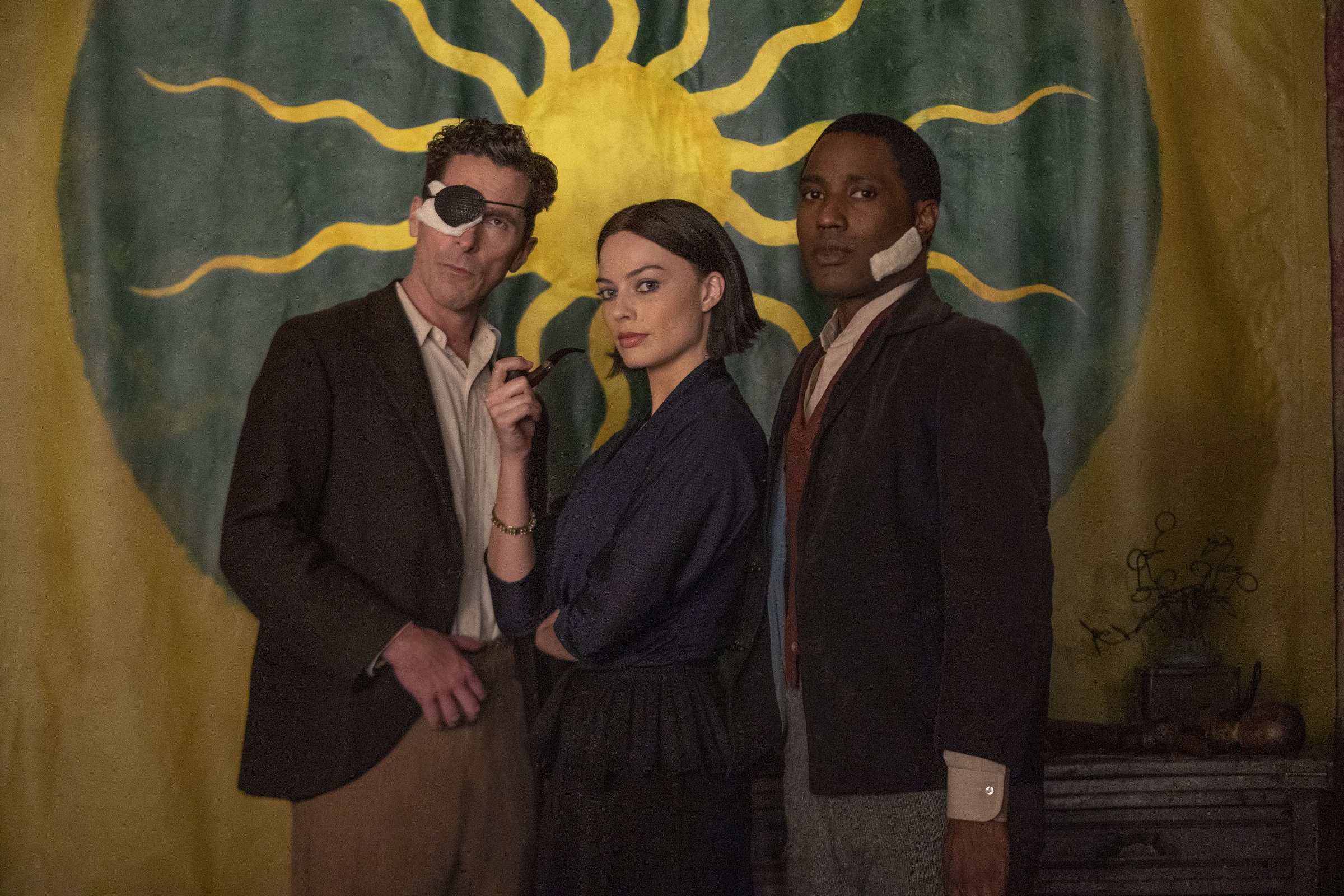 I really want to have fun writing this Amsterdam movie review. Amsterdam stars a lot of actors I normally want to see and enjoy. Christian Bale, Margot Robbie and John David Washington working together in a movie should be a home run, right? Add in Rami Malek, Anya Taylor Joy, and Robert De Niro as supporting cast add to the great casting. I should like movies with great casting, right? and at first I do.

Amsterdam has a fun opening scene that is somewhat entertaining with John David Washington and Christian Bale’s characters, They introduce these characters early and show them bonding as soldiers in a war in which they are suffering from serious injuries. Their injuries require surgery for the removal of shrapnel from their bodies. We see these soldiers form a pact with their nurse, Margot Robbie, who befriends them. Man, things start so well but then…

Amsterdam has some great casting and some great acting. Margot Robbie gives the best performance out of everyone in this movie. Christian Bale and John David Washington have decent chemistry but Margot Robbie absolutely owns it. John David Washington and Margot have less chemistry and are a bit awkward together. The origin of their pact is a great opening and set the tone for the rest of the movie. This opening is actually the most enjoyable part of the movie watching this group form a bond in a hospital in Amsterdam.

Michael Shannon and Mike Myers are welcome surprises and actually improve every scene they are in. It’s crazy just how the appearance of these supporting characters steals attention every time they’re on screen. We’re also getting a really fun performance by Christian Bale. Bale is overacting, a lot, but it’s all very fun to watch and works with the tone of this story. In fact, all of the supporting cast deliver fantastic performances. Rami Malek, Anya Taylor Joy, and even Robert De Niro all shine.

This film is very easy on the eyes. The wardrobe and makeup will catch your attention but it’s the attention to detail to everything that maintains the illusion. There’s also a very eye-appealing color palette to this movie that eases you into this world and grabs your attention.

For all the good things that Amsterdam has going in its favor, there’s also a lot that hurts the movie. There’s a big issue with the supporting cast. Some of my favorite performances in Amsterdam come from the most underutilized castings. Mike Myers and Michael Shannon are criminally underused in this film but are highlights when on screen. Where is Timothy Olyphant? And why didn’t we get more of Zoe Saldana? It’s like she makes a cameo but they don’t use her for anything substantial. Taylor swift was okay but also wasn’t in the movie very much either. And why was Chris Rock even here? He stands out like a sore thumb and doesn’t add much to the movie.

The way the plot unfolds in Amsterdam is bad. Like really bad. This movie clumsily establishes a scenario in which 2 of the main characters are framed for murder. The way that Amsterdam even establishes this situation seems unbelievable as it toes back and forth with serious topics and comedy. Not only does it seem wacky in the setup but there’s absolutely no sense of consequence once Amsterdam establishes the plot. This seems especially weird since a black man is accused of murder in the 1930s and there’s no sense of consequence. These moments suspend belief and make it difficult to maintain interest in what’s happening on screen.

The writing in Amsterdam is painfully dull. The actors do their best with what they are provided but the dialogue and circumstances are boring. I can’t get invested in any of these characters, or their relationships, because they are all boring. Christian Bale’s character is, by far, the most interesting but that’s due to the physical comedy with his character and nothing else. Everything bit of dialogue and situation seems slightly aloof and whimsical. There’s absolutely no sense of urgency, consequence, or importance to any one scene or development. There’s a moment where Christian Bale’s character is visited by his wife while alone with a different woman he’s attracted to. Neither woman reacts to the others’ presence nor is their any real sense of comedy to the moment. It’s just bizarre yet somehow still boring.

Amsterdam looks like it was a lot of fun for the actors to make. maybe Too much fun. Things start off so great but go downhill quickly. I got nervous the moment I saw Chris Rock on screen. All of the actors did a good job with their characters and their performances. My main problem is that the story was just so dull and sucks the life out of everything. Most of the performances are great except I couldn’t help but notice John David Washington’s non-stop blinking throughout the entire movie. I can’t tell if this is on purpose or not but it’s very distracting.

I struggled my way through this movie and can’t recommend it.