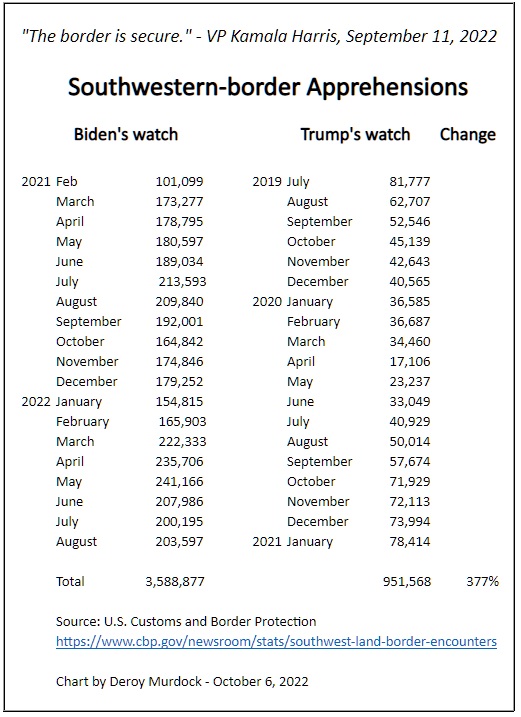 Democrats are sleeping peacefully through the US-Mexico “border” crisis they engineered. Perhaps this data will rouse them from their slumber:

The US Department of Homeland Security reports that the Mexican cartels’ income from smuggling illegal aliens into the US rose from $500 million in 2018 to $13 billion this year – 2,500% higher. If these criminals merge into a corporation, their gross income by 2022 will match that of – are you sitting? — Fox Corporation. Fox News Channel’s parent company earned $12.91 billion in the year ended June 30, 2021, and 12 months later raked in $13.97 billion.

This fact may wake up Sleepy Joe Biden and the lazy left: Mexicans human trafficking cartels is now as big as Tucker Carlson, Sean Hannity and Laura Ingraham.

If Democrats are still reeling from the devastation of their no-borders strategy, these numbers might rouse them:

Under Biden, Border Patrol apprehended 15 in FY 2021 and a staggering 78 in FY 2022, until August 31; September’s figures follow. How many terrorists got away? Who knows?

These deaths range from drownings in the Rio Grande to the barbaric demise of 53 illegals whose four smugglers let them fry to death inside an abandoned truck. Officials discovered this carnage on June 27 in San Antonio, Texas. That day’s highlight: 97º Fahrenheit.

It’s tragic enough when users overdose on cocaine, heroin, or other fentanyl-laced contraband. Even sadder are those innocently poisoned by counterfeit, toxin-tainted “Adderall,” “Xanax” and other bogus pharmaceuticals.

Fentanyl is 100 times stronger than morphine. Two milligrams in one pill can kill.

The views and opinions expressed in this commentary are those of the author and do not reflect the official position of the Daily Caller News Foundation.

Content created by The Daily Caller News Foundation is available free of charge to any eligible news publisher that can provide a large audience. For licensing opportunities of our original content, please get in touch licensing@dailycallernewsfoundation.org.

Content created by The Daily Caller News Foundation is available free of charge to any eligible news publisher that can provide a large audience. For licensing opportunities of our original content, please get in touch licensing@dailycallernewsfoundation.org.

New Right Network depends on the support of readers like you. Donate now

The Daily Caller News Foundation is a guest writer for NRN. They are a non-profit organization that provides original investigative reporting from a team of professional reporters working for the public good.