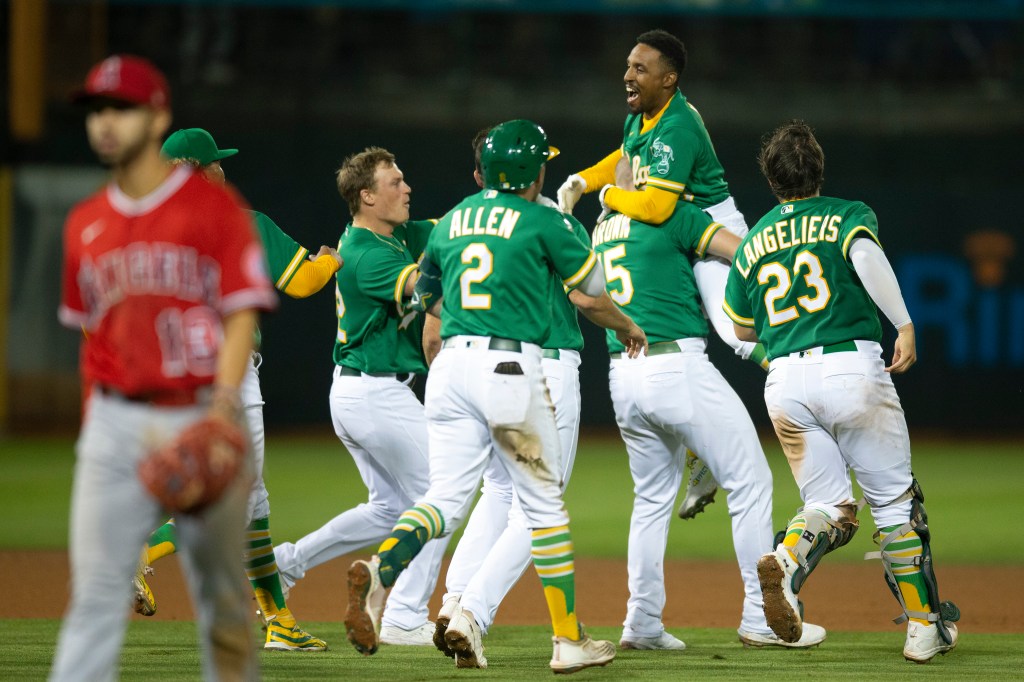 The A’s opened their final series of the season with a dramatic 5-4 comeback win over the Los Angeles Angels Monday night at the Coliseum powered by Seth Brown and finished off by Tony Kemp.

Entering the bottom of the eighth inning, Oakland (58-102) trailed 4-0 with five hits scattered throughout the previous frames. But then the comeback started.

Conner Capel, pinch hitting for Chad Pinder, got aboard with one out on an infield single and Brown tripled him home. Then Shea Langeliers brought Brown in to score with a single to center field, cutting the deficit to 4-2.

An inning later, the rally started when Ernie Clement hit a double leading off the inning. After Nick Allen walked to put the tying run on first base, Jordan Díaz and Sean Murphy went down.

Domingo Acevedo (4-4, 3.38 ERA) opened the tenth by striking out three-time MVP Mike Trout with the automatic runner on second. After intentionally walking Shohei Ohtani, he got Taylor Ward and Luis Rengifo out to end the inning.

In the A’s half of the tenth, Christian Pache bunted automatic runner Jonah Bride to third base, then Tony Kemp scorched a ground ball past the glove of first baseman Matt Thaiss, bringing Bride in for the winning run.

Neither starting pitcher factored in the decision, as Adrian Martinez allowed four earned runs in 4.1 innings for the A’s while Patrick Sandoval threw six scoreless for the Angels (73-87).

The teams return to the Coliseum Tuesday night for their penultimate game of the season. Cole Irvin (9-13, 4.11) will take the mound for the A’s and Michael Lorenzen (8-6, 4.52) is expected to start for the Angels.