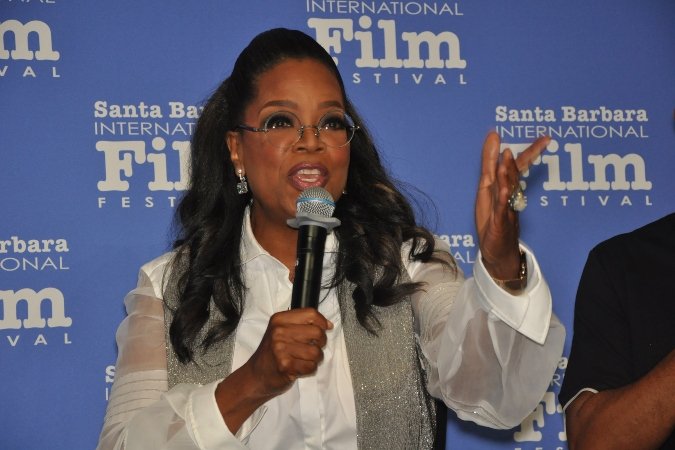 Oprah Winfrey remembers watching television and seeing Sidney Poitier win the Oscar for best actor in 1964 for his movie Lilies of the Field. It was a moment that “opened the door of what could be possible,” giving her hope for the first time that she, too, could be a star.

“If you go back to 1964, and where Black people were in the world in 1964, and seeing the possibility of your life, there wasn’t one,” Oprah Winfrey said during a Q&A after a screening of Sidney, the new documentary about Sidney Poitier’s life that she produced and appears in, at the Santa Barbara International Film Festival’s Cinema Society event on Tuesday. She was joined by director Reginald Hudlin and producer Derik Murray.

“My grandmother always thought I was going to grow up and be a she was, a domestic worker; as my mother was, a domestic worker. They couldn’t see beyond that. And the reason I was sitting on the linoleum floor is because my mother was out working, taking care of white people’s houses and white people’s children, because she couldn’t be there with me and her two other children. And so I was left to babysit that night when the Oscars were on,” Winfrey continued.

“I saw Sidney Poitier. It was the first time I had seen a Black man — we were called ‘colored’ at the time — get out of a limousine and nobody was dead.”

Seeing Sidney Poitier at the Oscars last night awakened a dream within Winfrey to be in the entertainment business herself one day that previously, she hadn’t realized was possible.

“It was so rare at the time to see Black people on TV that whenever there was somebody on — remember when the Supremes were on the first [time]? — you spent all your time calling everybody. ‘Colored people on, colored people on, colored people on! Turn on right now, Channel 7, turn [it] on!’ And so I started calling everybody I knew, and then he ends up winning the Academy Award. And I remember, in that moment thinking, ‘Wow, this has happened. And if that could happen to him, what could happen to me?’” Winfrey said.

“It just opened this door of what could be possible. And when you are given the opportunity to dream of something bigger than the life that’s in front of you, that’s hope.”