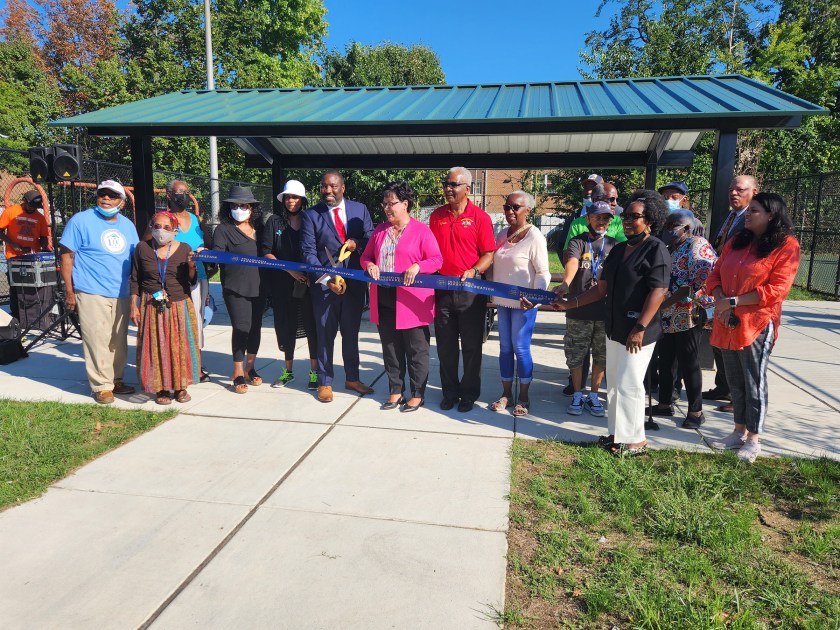 Residents of Southwest Philly are pushing for more fixes at a recreation center plagued by repeated flooding.

After two decades of what community members called disinvestment, Eastwick Regional Park has finally reopened with a brand new playground, part of a $337k renovation project.

The Department of Parks and Recreation and District 2 Councilman Kenyatta Johnson cut a ribbon last week at the park on South 80th Street, which is considered an “outhouse” by some Southwest Philly neighbors.

Many Eastwickians have long mentioned these renovations. The space went nearly 18 years without any major repairs, they said — until 2018, when the Eastwick Recreation Center’s advisory committee sent city officials a “wish list” of specific renovations.

For them, the park and the recreation center still had to be a safe space that allowed residents to be in community with each other.

The last time a detailed renovation took place was 2000, said advisory committee member Deborah Landers Young, despite ongoing repairs due to flooding. The area is resting of the lowest ground in the city.

“We’ve been through three floods since I’ve been here,” Landers told Billy Penn, referring to three major events in 1999, 2004 and 2020, when Ida caused nearby creeks and the Schuylkill River to burst its banks.

Many residents live in fear of the next natural disaster that could possibly sink their home. Local residents began to wonder if city officials would continue to wait until things got worse before acting.

“We kept asking for things to be fixed [at the rec center] and we were told there was no money to do it … Then came the flood in 2020,” Young said. Dad. Sen. Anthony Williams appropriated state funds for the necessary interior renovations to be done two years later, she said, in March 2022. Per Young, workers came in to lay new tiles but then stopped working on the project.

“The floors were a mess from the last flood. They are better now, but before I didn’t want my kids to take their shoes off for karate practice. That’s how bad it was,” McDuffle said. “There has to be a timeline or something to show this is the next phase — or at least in a phase.

At the ribbon cutting, Councilor Johnson addressed these concerns “We are now allocating funding to work on interior design, to work on those floor tiles, bathrooms, and so on,” he said. He also spoke about the need for positive spaces dedicated to serving Philly children and teens.

“Impact is going to come from investing in our young people and getting them involved in things that are positive as opposed to things that are negative,” Johnson told the crowd at the ribbon cutting.

The District 2 councilman will be back in court next week for a retrial on federal bribery charges, following the previous attempt ended in a mistrial after a dead jury.

Young, the advisory committee member, said these renovations are a good start, but Parks and Rec needs to “keep it going” when it comes to repairs.

“There are new families moving in here now,” Young said. “And I need a decent place for your kids to come and play and be safe.”