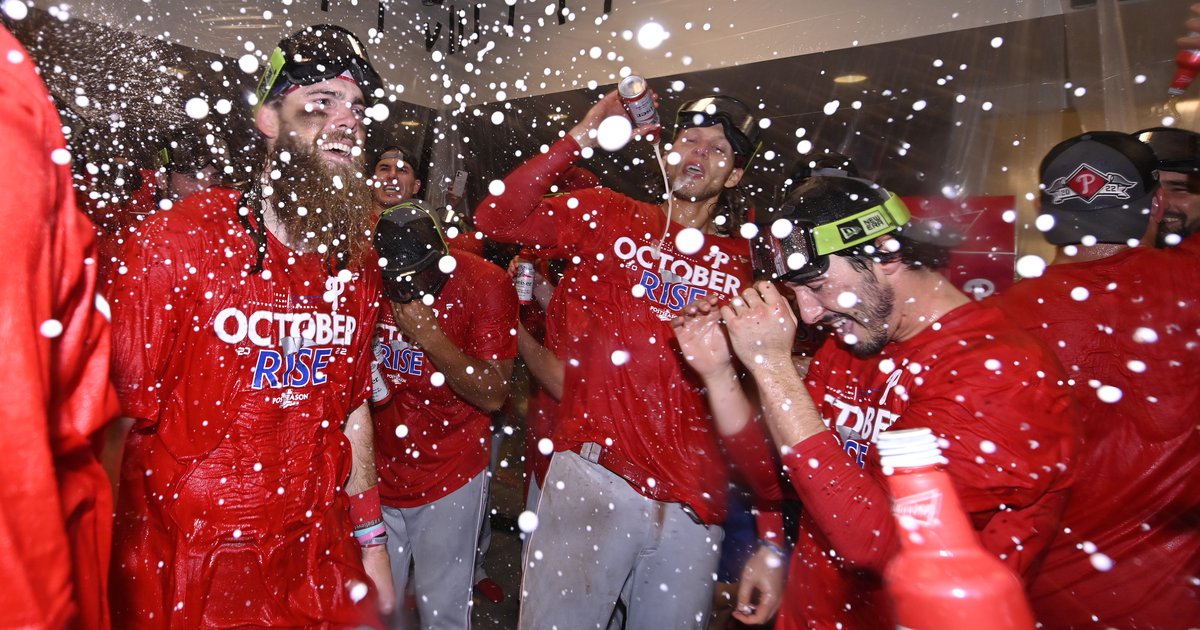 In much the same way that the 2017-18 Super Bowl champion Eagles team chose Meek Mill’s “Dreams and Nightmares” as their playoff hype song, the Phillies may have just jumped on the bandwagon with their unexpected choice.

On Saturday night, after beating St. Louis Cardinals 2-0 to win their first playoff series in the 12 years, the Phillies headed to their clubhouse for a celebration worthy of a thrilling victory. Between the speeches and the champagne shower, the party really got pumped up when a certain song came on.

MORE: Phillies hype videos? It’s been 11 years, but the Fightin’s are back in the playoffs

A 2016 remix of “Dancing On My Own” by Calum Scott and Tiesto blared over the speakers as teammates jumped, shouted, sang, danced and drank more beer.

The song was original released 2010 by Swedish singer-songwriter Robyn, who sings about showing up at a club and seeing her ex with someone new. Lyrics about heartbreak are set to an electric beat.

This is this original version of the remixed song played in the VICTORIOUS Phillies clubhouse; they played an updated version but this one still kills 🔥: Robyn – Dancing On My Own https://t.co/WAADNXF8uK

People generally found community in this song about loneliness, says Sam Sanderson NPR in in the spotlight of Robin’s poem.

“Opposite emotions wrapped in one package, happiness and sadness living together in a groove: Everything in this song is a juxtaposition. That’s what makes it an anthem,” Sanders said.

Calum Scott, a 2015 contestant on “Britain’s Got Talent,” posted his lid song from 2016, which he performed on the show and significantly slowed down Robyn’s originally upbeat tempo. That same year, Scott teamed up with Dutch DJ and music producer Tiesto to remix his version.

This is the song the Phillies used to celebrate their victory.

Following a live broadcast of the team’s festivities, Twitter exploded with fan reactions to the Phillies’ possible new playoff anthem.

I’m blasting “Dancing on my own” for the foreseeable future because it’s the Phillies’ 2022 playoff anthem.

Guess Dancing on My Own is our new anthem.

I imagine heaven looks like the Phillies popping champagne and singing along to Dancing on My Own.

Enjoy the ride. Last year we had Dancing on my theme song during our playoffs. Made it 10x more fun!

Out on the Phillies, because they decided to steal Dancing On My Own…

So, why did the Phillies choose this song to belt out their hearts?

No official reason has been given for the choice yet, but maybe lines like “I’m in the corner, why can’t you see me?” and “doing my best… keep dancing alone” speak to the team’s underdog spirit. Or, maybe everyone just loves the song. It’s definitely easy to dance to.

Up next, the Phillies will face the Atlanta Braves on Tuesday. Stay tuned to find out if they’ll continue to dance alone… and expect to hear the song spread around town over the next week.