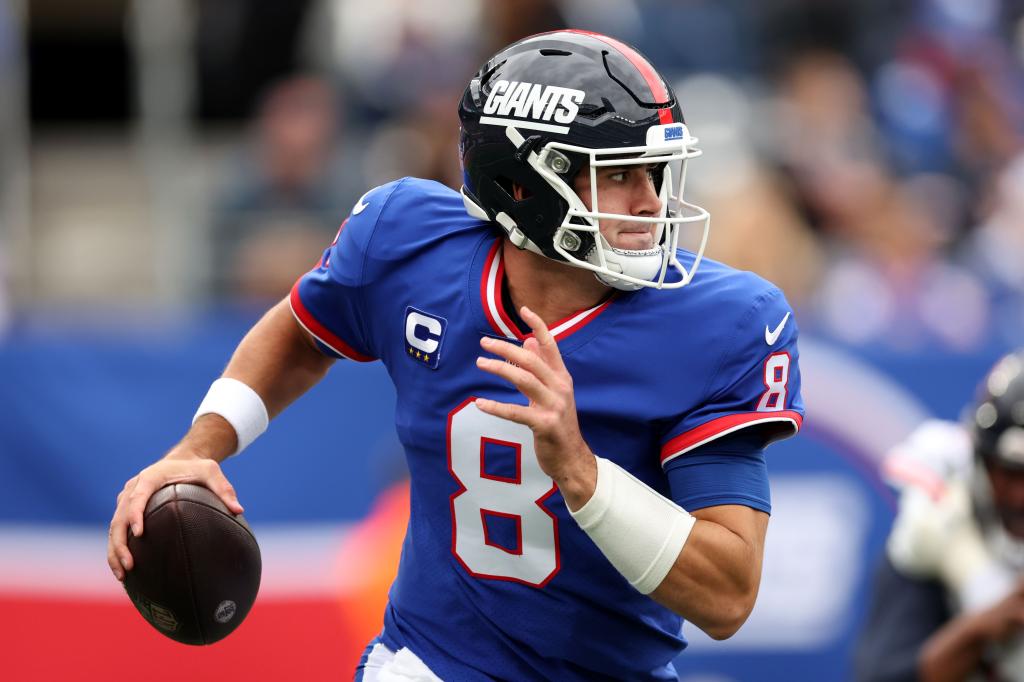 Just when it looked as if the Giants’ choices for starting quarterback Sunday against the Packers in London were down to Davis Webb and Prince Harry, Big Blue got some good news when Daniel Jones’ sprained left ankle showed improvement at practice Wednesday.

That development makes it a far more palatable option to take the Giants +8 points against Green Bay. Aaron Rodgers and his receivers are still not quite in sync, the short week won’t help them get there, and on the other side of the ball, the game appears to shape up similarly to the Packers’ matchup last week against the Patriots at Lambeau Field. Piloted by third-string QB Bailey Zappe, Bill Belichick’s team put on a good offensive showing win a 27-24 overtime loss.

The Packers knew the Patriots were going try to run the ball, and still New England pounded out 167 rushing yards. The presence of Jones should at least make Green Bay think twice about attacking Saquon Barkley (113 yards per game) with eight-man boxes, and I also have confidence Brian Daboll and offensive coordinator Mike Kafka will have some creative answers if the Packers pursue Barkley too aggressively.

In terms of a betting situation, the Giants are also back in their happy place (or, this one being in England, their jolly place) as they are 22-12-2 ATS in road and neutral-site games since the beginning of the 2018 season.

A few weeks ago, ahead of the Bengals game, we detailed here that the Jets are winless after each of their rare victories in the short Robert Saleh era. Let’s not get into all of the gory details again other than to point out that the record in those spots is now 0-5 SU, 1-4 ATS after the loss to Cincinnati.

So what has changed in two weeks? Well for one thing, the Jets’ starting quarterback, Zach Wilson, is back, while the opposition will be using its backup, Teddy Bridgewater. And the defense is finally starting to take shape, with Quinnen Williams looking like a beast and the secondary coming off four interceptions in Pittsburgh.

Miami WR Jaylen Waddle didn’t practice Wednesday and was limited Thursday. His absence, or at least diminished status, would enable the Jets to use their best resources on Tyreek Hill while Williams, Carl Lawson and Jermaine Johnson go after Bridgewater.

Don’t know if this is a classic sandwich game for Buffalo, but for some reason I’m craving a beef on weck. Bills had tough battles with the Dolphins and Ravens, and next week go to Arrowhead to face the Chiefs. Will take the big head start with Kenny Pickett, who can do more with the Steelers’ offense than Mitch Trubisky did.

It’s the third road game in the past four weeks for Atlanta, but this is more just a feeling that the Bucs, injuries and all, are going to be geared up for a no-doubter coming off back-to-back losses to the Packers and Chiefs.

Tennessee picked up a big victory last week in Indianapolis, so the edge in need belongs to Washington after three losses in a row. Injuries to Treylon Burks (Titans) and Jahan Dotson (Commanders) could be a wash, but I just feel as if I’m getting the better team at a very cheap price.

This is a good time to salute Paul Schwartz for his incredible 14-1-1 ATS master class in last week’s Bettor’s Guide. His one loss was on Cleveland, and Paul is going the other way with L.A. here. But I figure Nick Chubb and the returning Myles Garrett will makes this a tough go for the Chargers.

Saints have a one-point win followed by three losses, a bunch of injuries, and the jet lag from last week’s trip to London to consider. Though desperation could help them snag a “W,” there’s a long way to go from there to distancing Geno Smith and the Seahawks by six or more.

Did you think you’d ever see this tiny spread for a Patriots-Lions game in Foxborough? Me neither. I’m rolling with it because, after scoring 24 points with Zappe and a limited offense in Green Bay, New England should be able to do even more against this Lions D. Also a revenge game for Matt Patricia, fired two years ago by Detroit.

I don’t usually focus on series results, but the Texans have won eight in a row and 19 of the past 23 against the Jaguars. Jacksonville seemingly has a bit of an upper hand now, but I’m not sure I can go from these results to Jags -7 so directly.

Little bit worried about laying seven plus the hook because -6.5 was available earlier. Chicago’s offense was a little less prehistoric last week as Justin Fields threw for 174 yards, but the Bears still lost by eight to the Giants. Thinking Kirk Cousins and Justin Jefferson get this to the neighborhood of the Vikings’ 23-7 win over the Packers in Week 1.

Long trip for the 49ers off a big Monday night rivalry win. Normally, that’s a recipe for a letdown. But this defense is insanely good, and Kyle Shanahan will find a way to generate more than the 10 points the 49ers put up in each of two road losses in September.

Losses by 21 to the Bills and 15 to the 49ers convince me the Rams have taken a step or two down from the mountaintop. With a strong, opportunistic defense and serviceable QB Cooper Rush, the Cowboys could win this one outright.

Even though the last undefeated team in any given season is always living on borrowed time, the Eagles are worthy of support after their savage comeback from 14-0 down versus the Jaguars.

It has been a frustrating start for John Harbaugh and the Ravens, who have flushed big home leads to the Dolphins and Bills. The Bengals come in off extra rest after distancing Miami, and will have confidence off of their 41-17 and 41-21 wins over Baltimore last season.

Betting on the NFL?

The Silver and Black are coming off their first win, and many will remember their 40-32 victory at Arrowhead in 2020. But in the surrounding seasons, their visits produced beat-downs of 48-9, 40-9 and 35-3.

Lock of the week