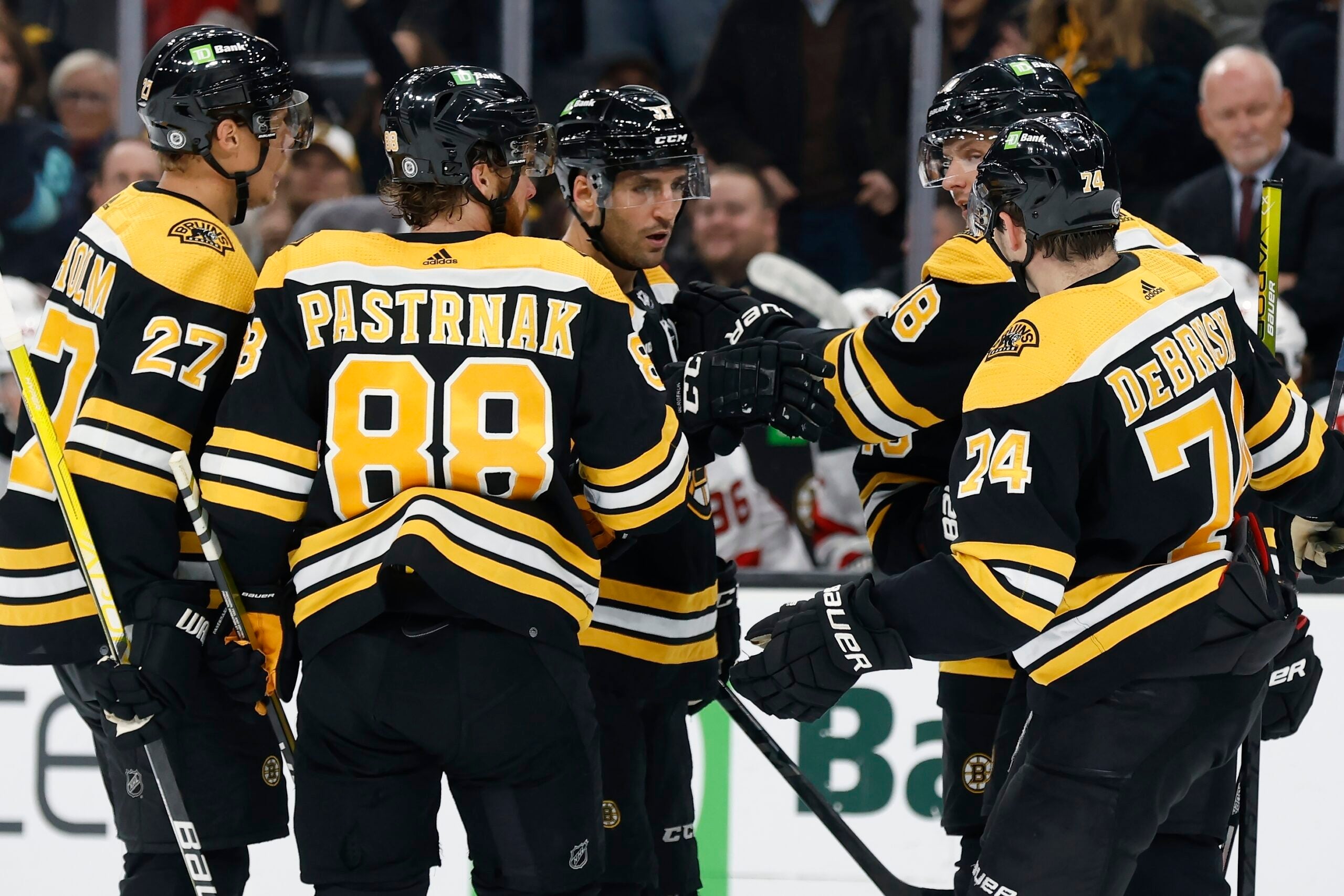 Tuneup season officially came to a close on Saturday night. Now the Bruins can look ahead to their opening night game against the Washington Capitals on Wednesday.

Bruins general manager Don Sweeney will eventually need to clear salary cap space once Brad Marchand, Charlie McAvoy and Matt Grzelcyk return. Perhaps he will give a head start on this with the final decisions of the roster to start the 2022-23 campaign through the trade market or through waivers.

Amid the overlapping developments, a handful of players had a productive preseason in their quest to grab one of the open roster spots. Barring any changes with Hall’s status, here’s a look at the Bruins’ projected opening night lineup.

Ideally, Hall would fit in there or with David Krejci and David Pastrnak. With his status uncertain, the Bruins have to find the next man up.

Foligno showed the steps during the pre-season. Jim Montgomery and the coaching staff are hoping Foligno has that bounce-back season in a bottom-six role. For now, they’ve tried him in a top-six role, and maybe the former Blue Jacket gets the Bergeron rub to start the year.

DeBrusk picked up where he left off from his hot finish to the 2022-23 campaign. He feels more comfortable playing on his off-wing, which will benefit the Bruins significantly once their top-line left wing returns, perhaps around Thanksgiving time.

Zacha started camp with Bergeron and DeBrusk before Hall’s injury. But a change born out of necessity can provide a longer-term impact than expected.

The Czech trio displayed unparalleled chemistry in their first game together Wednesday in New York, combining for three goals and six assists. Pastrnak added another tally in Saturday’s dress rehearsal against the Devils off a Krejci feed during a second-period power play.

Krejci’s return undoubtedly gives the Bruins more firepower on their top two lines. Unlike most of Cassidy’s tenure, the Bruins will have a formidable top-six, with Pastrnak and Krejci anchoring the second line.

Maybe Hall will return to this place when they are healthy. For now, the Bruins should run with Zacha, Krejci and Pastrnak on the 2nd Line.

This is where the Bruins get some line carry over from the end of the Cassidy era.

Smith and Frederic struggled with inconsistent play a year ago. Coyle had a decent 2021-22 campaign coming off a pandemic-plagued 2021 season, but the Bruins need a little more production from their third-line center.

This is not necessarily a long-term option. Frédéric hardly showed that there was no offensive honey during his time with the big club. On top of that, the hulking, heavy-hitting forward found himself on the other end of the line with unfair penalties. Frederico’s similar performances this year could force the Bruins’ hand.

Smith is entering the final year of his three-year contract. The Bruins could have some value for Smith on the trade market. But they would probably prefer to keep another bottom-six veteran – who tends to score in bunches – over some of the younger, talented but unproven players in the system like Fabian Lysell and John Beecher.

Marc McLaughlin’s assignment to Providence was a bit of a surprise Thursday, but his waiver-exempt status essentially made him a casualty of the camp. The former Boston College Eagle picked up where he left off from his late season during the preseason and played in a favorite as one of the first callups.

Unlike McLaughlin, the Bruins have quite a few fourth-line candidates who are not exempt from waivers. And there’s one they can’t afford to lose in Studnicka, given the thin center options in the pipeline to replace Bergeron and Krejci once their careers end.

The skilled Studnicka doesn’t necessarily fit the fourth-line mold typically reserved for blue-collar players. But his quickness and offensive touch provide a unique look in the middle of the check line, even with a pair of high-energy wings.

Ideally, the Bruins want Studnicka to become more assertive on pucks and withstand more physicality in front of the net. At the very least, he showed some perseverance after going down a couple of times on Wednesday against the Rangers in another sign of progress.

That leaves Jakub Lauko and Wagner for the final wing spot. Lauko can report to Providence without clearing waivers.

Wagner persevered through waivers a year ago, becoming a leader in Providence and earning a call-up late last year before the postseason. The Walpole native showed poise and strength with consistent pre-season performances to earn his stripes.

Tomas Nosek essentially becomes the 13th forward. He hasn’t produced a goal since Jan. 2 in Detroit, but he’s been a steady presence on the penalty kill. Because of that, he probably finds himself in the Boston lineup more often than not. But Studnicka’s field effort deserves an opening night spot.

Assessing talent and installing an up-time defensive system have become Montgomery’s primary goals in his first year at the helm. The six blue-liners will need time beyond the preseason to acclimate to a quick-transition philosophy under the former Dallas Stars and University of Denver coach.

Of all the options, Lindholm will probably take the least time to adjust to the new defensive approach. The new coaching staff will lean on the former Anaheim Duck to log heavy minutes while McAvoy and Grzelcyk continue to heal.

The Bruins could also go with a heavy approach that pairs Lindholm with Brandon Carlo on the top pair. But maybe they’ll go with an offensive-minded puck mover after seeing the Lindholm-Reilly pairing in Saturday’s preseason finale.

Of course, the rest of the pairs can not provide balance. But of all the options, a fully healthy Reilly could benefit the most from a new coach encouraging him to use his puck-moving traits to his advantage. At the very least, it can increase his trade value, given the Bruins’ salary cap situation.

For much of last season, Carlo and Derek Forbort found themselves under scrutiny from a passionate Boston fanbase. Every defensive miscue and communication mistake became magnified with every counter goal that allowed the third pairing. They encountered mistakes again in Saturday’s preseason finale against the Devils, including a missed assignment on Jack Hughes’ tally early in the third period.

Elsewhere, Forbort and Clifton held their own, including in Boston’s first-round matchup against Carolina. Still, the Bruins probably don’t want to endure another season with an inconsistent pair, even if they showed stability under immense pressure.

Forbort’s penalty-killing prowess makes him a longer-term candidate for Clifton and his energetic but erratic streak. The veteran has formed a decent bond with Carlo as a shorthanded defensive pair, so why not try to make this pair a thing to start the year?

Carlo’s well-documented collapse and discontent under Bruce Cassidy led to arguably the worst year of his career. He has become more prone to turnovers and, at times, has become more of a liability than an asset in 2021-22.

At his peak, Carlo became a reliable shut-down defender. Under Montgomery to get more offense from Carlo beyond his 15-point campaign a year ago without sacrificing his strengths. The Bruins need more point production from the blue line, and even the slightest offensive improvement for Carlo would prove beneficial.

Zboril came into camp hoping to build on a productive 10-game run with the big club before sustaining a season-ending torn ACL last November. At the start of the camp, the Czech showed his production in the transition game and did not look a bit out of place in his own end.

Ebbs and flows took Zboril to the end of the field. He was prone to turnovers and missed assignments in front of the net.

Zboril will encounter similar nights during a long 82-game slate. His response to adversity will dictate whether he stays with the big club long term. Any setback will only add more agony to Sweeney’s flawed history of writing and development.

Putting Zboril with a battle veteran like Anton Stralman will only benefit the 2015 first round selection. Stralman provided a steady hand in the three zones all over the field after signing his PTO.

With the benefit of LTIR, the Bruins can likely put Stralman under the cap, assuming they offer the Swede a contract. Ideally, Stralman will stay in a third-pair role once Grzelcyk and McAvoy enter the fold.

Ullmark surpassed Swayman during the Boston exhibitions. The former Saber will likely have the upper hand when it comes to opening night starts.

But don’t expect Montgomery to deviate from his plans for the tandem’s workload this year. The Bruins will have their share of three games in four nights, starting on Oct. 15 with their first two home games (against Arizona and Florida) and their second road tilt of the year (at Ottawa).

While the Bruins navigate some uncertainty to start the year, they know at least one thing remains true. The trademark Ullmark-Swayman hug will once again be front and center after every Boston win.