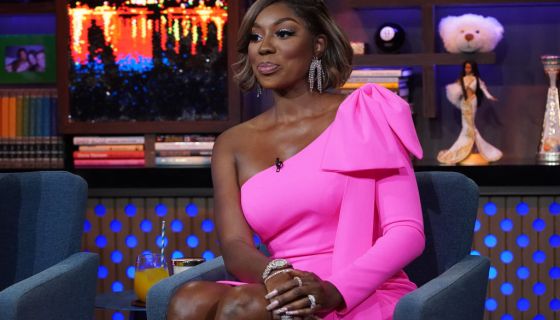 Shots fired with no regrets!

The newest season of The Real Housewives of Potomac promises plenty of drama, scandals, and messy clashes. One of the most talked about moments from the trailer for season 7 is between Dr. Wendy Osefo and Mia Thornton. In an exclusive interview with Page Six, Wendy doubled down on calling Mia a “crater-faced b*tch” in the heat of the martini-flinging moment.

Both Bravo stars have very different stories about what led up to the drink toss. Wendy claims Mia mistakenly worked herself up with her notoriously bad memory before the “unwarranted” assault. In a clip of a group dinner, Mia hurled a full glass of alcohol at the professor while a calm Karen Huger was caught in the middle.

“Well, one thing we know about Mia is that she lies. And another thing is she does not have a good memory,” Wendy said, referencing other times Mia erroneously stirred the pot.

“So, in her head, she may have thought that. But if you pay attention to everybody at the table, why we’re so calm is because nothing was said,” she explained.

Although the hot-tempered newcomer said she was provoked because “people talk too much,” Mia expressed remorse for throwing the drink. On the other hand, Wendy says she still has absolutely no regrets about her “crater” comment.

“That was a fact. I stand on it, yes. Because without the filters, that’s a fact,” Wendy defiantly said.

The heavily-degreed diva said this incident just emphasizes her earlier claims that colorism impacts who gets called out for violence or labeled “aggressive.” She urged the audience to pay attention to the dynamics of the group and compare this altercation to the fallout from Monique Samuels’ epic altercation with Candiace Dillard-Bassett.

Mia also opened up to Page Six about how Wendy’s dig about her skin cut deeply.

“It hurts because it’s something that I can’t necessarily do anything about. You immediately start to go into this spiral of, ‘OK, how do I fix it? How do I make sure that I remain mentally strong enough to not allow someone to judge me based off my “physical exterior?” Mia said.

“Because there’s so much more to Mia inside that I don’t want people to forever look at me and say, ‘Oh, you know, she has all these acne scars.’ And what does that even matter?” she continued.

During Mia’s first season, she discussed her struggles with pain and insecurity from severe burns she suffered as a child. She also says that her lengthy battle with “crater”-causing acne links back to her traumatic childhood.

“Had I had proper parenting as a teenager, don’t you think someone should have taken me to the dermatologist?” Mia asked.

It sounds like the dust is nowhere near settled from whatever went down this season. Wendy acknowledged Mia’s apology but questioned the sincerity and timing. Where do they stand now? Wendy said that she and Mia better be seated far apart during the upcoming BravoCon 2022.

Season 7 of The Real Housewives of Potomac premieres Sunday, Oct. 9, at 8 p.m. ET on Bravo.

Will you be watching?