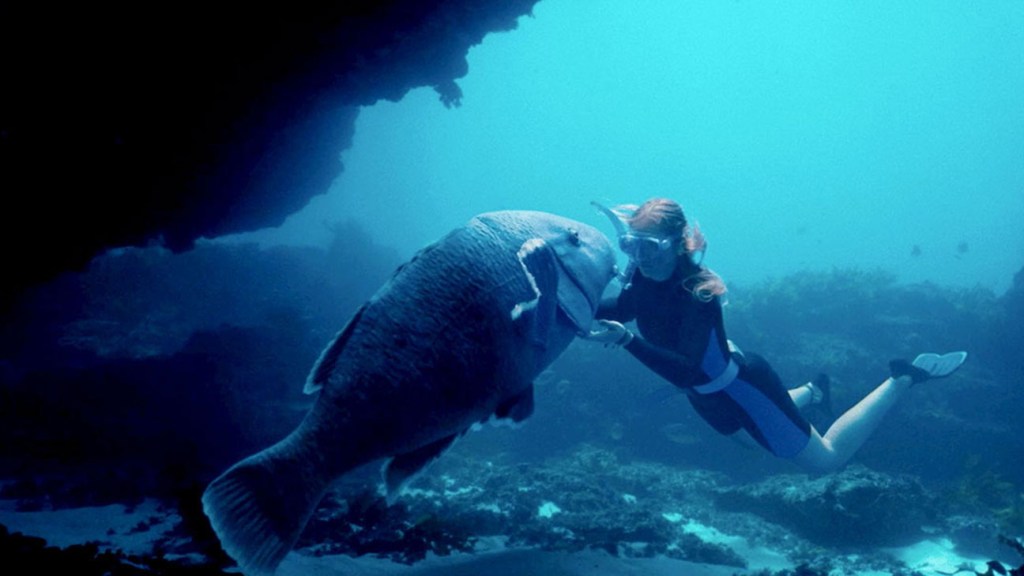 After exploring the devastations of drought in his 2020 acclaimed thriller The Dry, Australian director Robert Connolly takes a deep dive into the majestic world beneath the ocean’s surface in Blueback, his forthcoming environmentalist family film starring Mia Wasikowska and Eric Bana.

Blueback is loosely based on Booker Prize nominee Tim Winton’s critically acclaimed novella of the same name. Connolly spent over 20 years developing the project, which he also co-wrote. He describes it as “a family-friendly celebration of the natural world.”

Taking place in multiple time periods across a young woman’s life, the film tells the story of a girl who befriends a wild blue groper while scuba diving. When she discovers the fish and its kind are under threat, she takes inspiration from her environmental activist mother to face down poachers to protect the creature. The episode marks the beginning of her life-long mission to save the world’s coral reefs.

Blueback made its world premiere in September at the Toronto International Film Festival, where it was warmly received by critics. Village Roadshow have set the film for a wide release in Australia on Jan. 1, 2023, with rollouts in various other international markets taking place around the same time.

The Hollywood Reporter recently spoke with Connolly about the process of bringing Tim Winton’s beloved, now-classic novella to screen.

Tell me about Blueback‘s creative origins for you. How did you come to make this film?

It’s based on a novella by Tim Winton, which I loved. He’s one of Australia’s greatest authors and the book is what he’s called “a timeless fable for all ages” — and I just love that. Over many years, I had discussed and explored ways to make it as a film. I had a lot of success with my family film Paper Planes (2014), which was a very curious experience for me, because it was after I’d made the war film Balibo (2009). To go and make a family film was very different, but I really enjoyed reaching out to that broader audience. So, I had been kind of looking for another big family film. The synergy for me, I guess, was that I’ve always had a great love of the ocean and a great interest in the challenges that face us in terms of our environment and the natural world. And I’ve been very conscious that the environmental movement has really embraced the idea of activism through optimism. So, a film like Blueback, which tells a really positive story about how our action can can impact positively on the environment, was one that really appealed to me — and it felt very timely as well.

And I understand you co-wrote the screenplay with Tim Winton himself. What was that process like?

I wrote the script and at the end of the process, I gave it to Tim to have a look at, and to do some additional work on, because it’s something that’s so passionate to him. So, I wrote the script over many years, and then right at the end it became this great collaboration. He’s a friend; we’d worked on the film The Turning together. But it was a great to have this incredible author to have a look at it at the end — just to give it a little bit of his flavor. Also, for him, it was also a chance to feel relaxed about some of the changes I’d made. You know, in the book, it’s about a little boy not a little girl. It was my daughter Kitty — she’s 20 now — but when I first started developing it, she gave me a lot of grief about the fact that I was making another film about a boy and a male protagonist. So, it was for my daughters really that I changed the gender of the protagonist with Tim’s permission.

But what was interesting is that the film then started to move very quickly to get financed. I realized that there was a real sense of a Greta Thunberg generation of young women that are championing the environmental movement. So, it was a really timely and appropriate change and Tim was really happy about that.

The result is a wonderful story about strong girls and women, effecting change on their own terms. As a male filmmaker, what did you have to do to get in the mind of an ambitious but kind of dreamy young girl. You mentioned you have daughters yourself, was reflecting on their experience helpful to you? How did you go about it?

Well, in many ways it felt like an effortless change that the story sort of was asking for. There’s been a massive shift in the Australian industry and on our film shoots. You know, we had gender parity on our crew. But the film really made me think a lot about my own daughters, and their own very spirited sense of passion about wanting to kind of save the world —from climate change and all of the degradation that’s happening. They’re just great lovers and natural world, and I tried to channel some of that. I also ended up kind of thinking about my own mother. Because the film had Radha Mitchell playing this activist mother, trying to stir in her daughter this sense of what you can do, and what is your responsibilities are, to stir change and have an impact.

So, I think every film that you make has that kind of personal dimension. I mean, I also have very broad and commercial ambitions, but part of what I love about being a filmmaker is the way that you are able to go and investigate deeply personal aspects of your own experiences of the world. I’ve always loved the very deeply humanist filmmakers. You know, Peter Weir was a massive impact on me.

You know, I understand, you’re often quite politically motivated in your work, I would assume it’s your belief that filmmaking can affect real world change, correct. In that case, what kind of impact are you hoping this project might have?

Yeah, it’s been an interesting journey in my career, because some of my earlier films were more overtly political, in terms of striking out a world that they felt that they could kind of impact and critique. A film like Blueback — you know, as a “fable for all age” done in a big, epic, cinematic scale — is more about taking the audience on this incredible journey beneath the ocean, and trying to inspire a sense of appreciation through those means.

So, I feel like I’m trying to find a more nuanced way to do it. Jacques Cousteau used to talk about this idea that if you make people love something, they will care for it. So, Blueback’s ambition is more along those lines. We’re trying to take an audience beneath the waves to experience that amazing environment in way they haven’t before — with large format cameras, an amazing underwater team, but also a beautiful story.  We really embraced the idea that documentary has looked into this world in incredible ways — from Blue Planet to My Octopus Teacher — but that narrative films haven’t done this for quite a long time. So, our goal was to inspire a love of the ocean, and maybe even a sense of responsibility for it. But rather than it being a didactic political work, we wanted it to be a lyrical and emotional experience of investigating and getting to know this incredible fish that she befriends. And the gentle takeaway message, I hope, is that we can help.

So, lastly, I’d love to hear a little bit about the the filming of that fish. You sort of create the fish as a character to an extent. What were the practical challenges of doing that and how did you go about it?

Well, first of all, the blue grouper is the most incredible fish. You know, can live to age 80 and they grow to be as big as a person. They’re almost like the puppy dog of the ocean, where they will come up and play with you and many people believe that they remember you and your paster interactions together. They’re quite incredible creatures. So, I worked with an amazing Melbourne-based company, Creature Technology who are famous for a lot of work they’ve done on Walking with Dinosaurs. They make what are incredible puppets, really. I looked into the history of cinema at some of the great puppets, going right back to ET or Yoda. I was looking for the way that cinema has kind of embraced the idea of using a tactile way of creating something, rather doing the usual VFX fish.

We actually filmed in the real-world ocean and all of the marine creatures in the film are real. But for the physical interactions with the fish, we created this amazing fish puppet. And the puppeteers were just amazing in the way they created this fish character. It was evident when Mia Wasikowska said she just lost herself in all of the scenes we filmed with her beneath the ocean. Audiences are so used to wall to wall visual effects; you often can’t tell whether a film is a digital animation of a kind or was actually filmed in the real world. We just embraced reality with this film. There were no stunt performers and all of the actors learned to free dive in the open ocean. They learned how to swim 20 meters down and swim around with one breath of air. It all felt very tactile, visceral and true to our ambition to film in the real world of this story.

Working with this amazing team that created the puppet also felt incredibly right for us, because it felt similarly tactile and real. A lot of the work they did involved  not just sculpting and shaping it, but swimming with blue groupers to understand how they react to things and how they move around people. I guess you could easily imagine a version of the film where it was all just VFX, but doing it this way in the real ocean felt true to the spirit of the story.