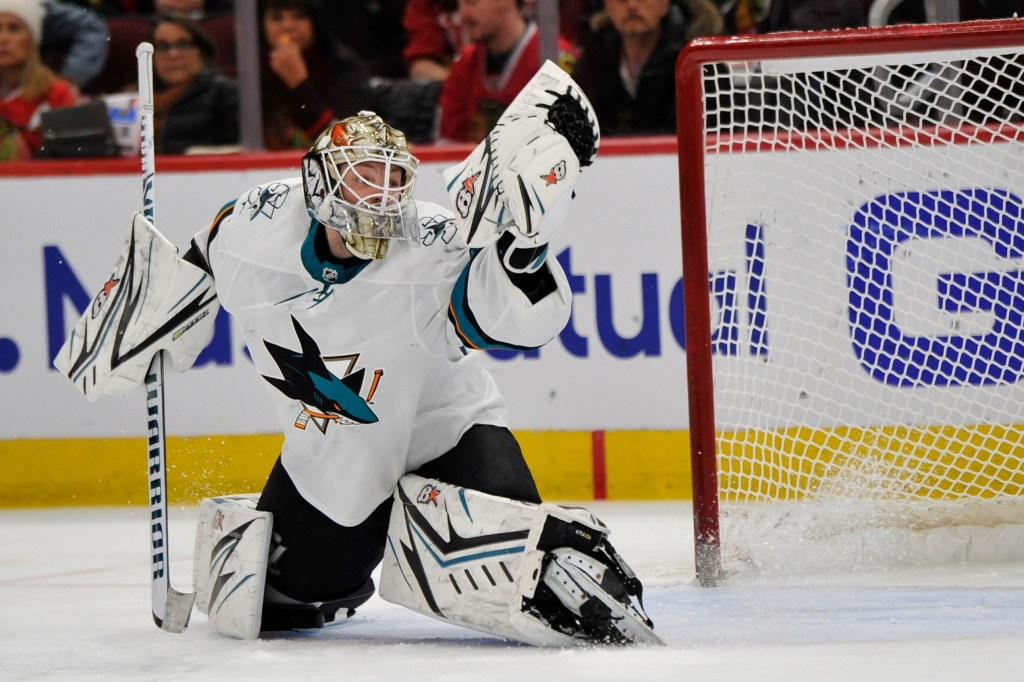 The San Jose Sharks placed goalie Aaron Dell and winger Jeffrey Viel on waivers Sunday. If the two are not claimed by another team before Monday at 11 a.m. (PT), they will be assigned to the Barracuda, the Sharks’ AHL affiliate.

Neither move was unexpected, but the Sharks are hoping both players clear waivers, particularly Dell, who was sharp in training camp and in the preseason. He stopped 26 of 27 shots in his one exhibition game, a 3-1 San Jose win over the Los Angeles Kings on Sept. 28.

Some teams could be looking for a goalie, including the rebuilding Arizona Coyotes, who did not get impressive performances from their netminders in the preseason. Karel Vejmelka led the way with a 3.76 goals against average and a .863 save percentage in three games.

If he does clear, Dell, given his NHL experience, would likely be the first netminder recalled should either James Reimer or Kaapo Kahkonen get injured or be otherwise unavailable. Dell, 33, has played in 126 NHL games over the last six seasons with a 50-47-13 record and a career .905 save percentage.

Dell was also with the Sharks organization from 2015-2020 and is eighth in franchise history in wins (48) and save percentage (.908). Dell was also the Sharks 2017 nominee for the Bill Masterton Memorial Trophy.

The other pro goalies in the Sharks’ system right now are Zachary Emond, Eetu Mäkiniemi, and Strauss Mann, none of whom have NHL experience.

Dell and Viel were among a group of over 50 players who were waived by NHL teams Sunday. Viel is in his fifth season in the Sharks organization and has appeared in 45 NHL games, including 34 last season when he had five points and 114 penalty minutes.

After Sunday’s transactions, the Sharks will have 16 forwards, nine defensemen, and two goalies on their roster, which includes rookies William Eklund, Thomas Bordeleau, and Nick Cicek, and injured players Alexander Barabanov and Markus Nutivaara.

It’s unclear if either Barabanov or Nutivaara will be ready for the Sharks’ next game on Friday at home against the Carolina Hurricanes. Eklund, Bordeleau, and Cicek can be assigned to the Barracuda without having to go through waivers.

Per CapFriendly, the Sharks have to build their cap-compliant 23-man roster for Tuesday by using only the players who traveled to Europe, although transactions can take place after that day.