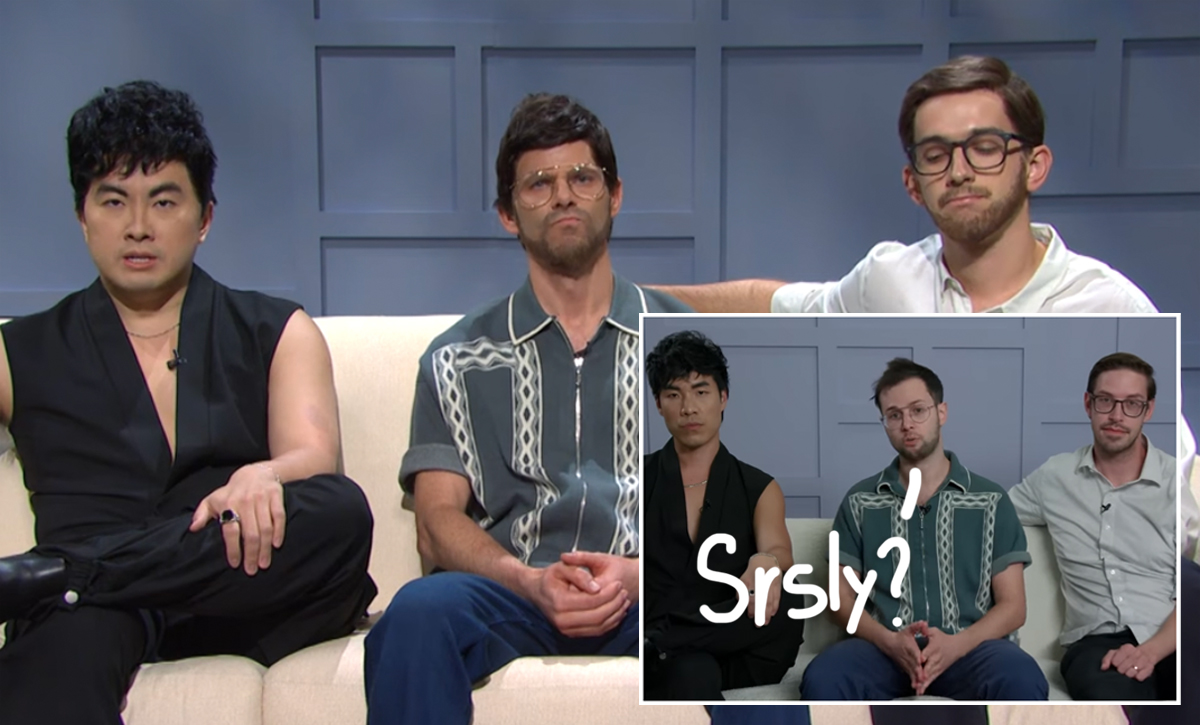 It looks like The Try Guys’ controversy got the Saturday Night Live treatment – and some people are not too happy about it!

On Saturday, the sketch comedy series parodied a video from the remaining three members of the popular YouTube comedy group in which they responded to former Try Guy host Ned Fulmer’s firing from the team after getting caught cheating on his wife Ariel with an employee. In the skit, cast member Ego Nwodim and host Brendan Gleeson portrayed CNN reporters. And while the 67-year-old actor as a White House correspondent was supposed to be talking about developments in America’s support of Ukraine, things took a turn when some breaking news came in. Brendan interrupted the broadcast to announce that the Try Guys have responded to the viral controversy about Ned, saying:

“I’m getting breaking news that the Try Guys have now responded to the whole Ned Fulmer situation. It’s obviously an evolving story, but CNN can confirm that the Try Guys have released an official YouTube video clapping back at ex-Try Guy Ned Fulmer, the ‘Wife Guy’ Try Guy. He disrespected the brand by making out with one of the ‘Food Babies’ at the Harry Styles concert. It’s a sad day indeed.”

The skit then cuts to a fake interview with The Try Guys – Bowen Yang as Eugene Lee Yang, Mikey Day as Keith Habersberger, and Andrew Dismukes as Zach Kornfeld – to address the situation. During the conversation, a confused Ego questioned why this blew up into such a big scandal, asking if the affair was non-consensual. To which Day replied:

“Worse, he committed the heinous act of having a consensual kiss, and not telling us, his friends.”

Following some back-and-forth, the reporter eventually attempts to transition back into the newscast. However, the Try Guys insist on having the cameras cut back to them so they can continue talking about the “trauma we are facing.” You can ch-ch-check out the entire skit (below):

Shortly after the SNL episode aired, many people actually took issue with the parody, with many people calling the show out for “downplaying” the whole situation between Ned and associate producer Alex Herring. See the Twitter reactions below:

“Oof, rude awakening to SNL that the entire internet is on the Try Guy’s [sic] side. There were so many other ways they could have parodied this, but they went for making the victims the punchline while downplaying workplace harassment. That’s pretty tasteless comedy.”

“This feels reductive of a situation in which there was a big power imbalance in an unethical relationship in the workplace. Not to mention the families, employees and friends hurt by this now have to see their pain being trivialized for a skit? Feels weird.”

“hm, so let me get this right: ned wasn’t made fun of in the skit, but the other try guys were for processing their emotions? for losing a friend of almost a decade? for potentially losing millions in profit? guess why. ned has a snl writer buddy. this man is a real piece of work.”

“if anything,, can we PLEASE stop downplaying it as just a simple cheating scanda . ned fulmer was her BOSS . this was a power imbalance , and companies like SNL are just twisting the narrative for laughs . it’s just stupid ,, and unfair to the remaining try guys as they fight”

“is it just me or is it kinda screwed up that they are making fun of a POWER DYNAMIC of a sexual relationship between a company’s founder and one of its employees??”

“one thing I find really yucky about the snl skit about the try guys on top of downplaying ned’s actions is how much they focused on the specific employee he had a relationship with and named her segment and everything. especially when the try guys asked that she be left alone”

Some members of The Try Guys even reacted to the segment! Keith tweeted on Sunday:

“Wow that was unexpected”

Meanwhile, his wife, Becky Habersberger, potentially provided some context as to why SNL did not focus the skit on Ned, alleging:

Wow. What did YOU think about the skit, Perezcious readers? Let us know in the comments. In case you missed last night’s episode, you can also ch-ch-check out the rest of the sketches (below):