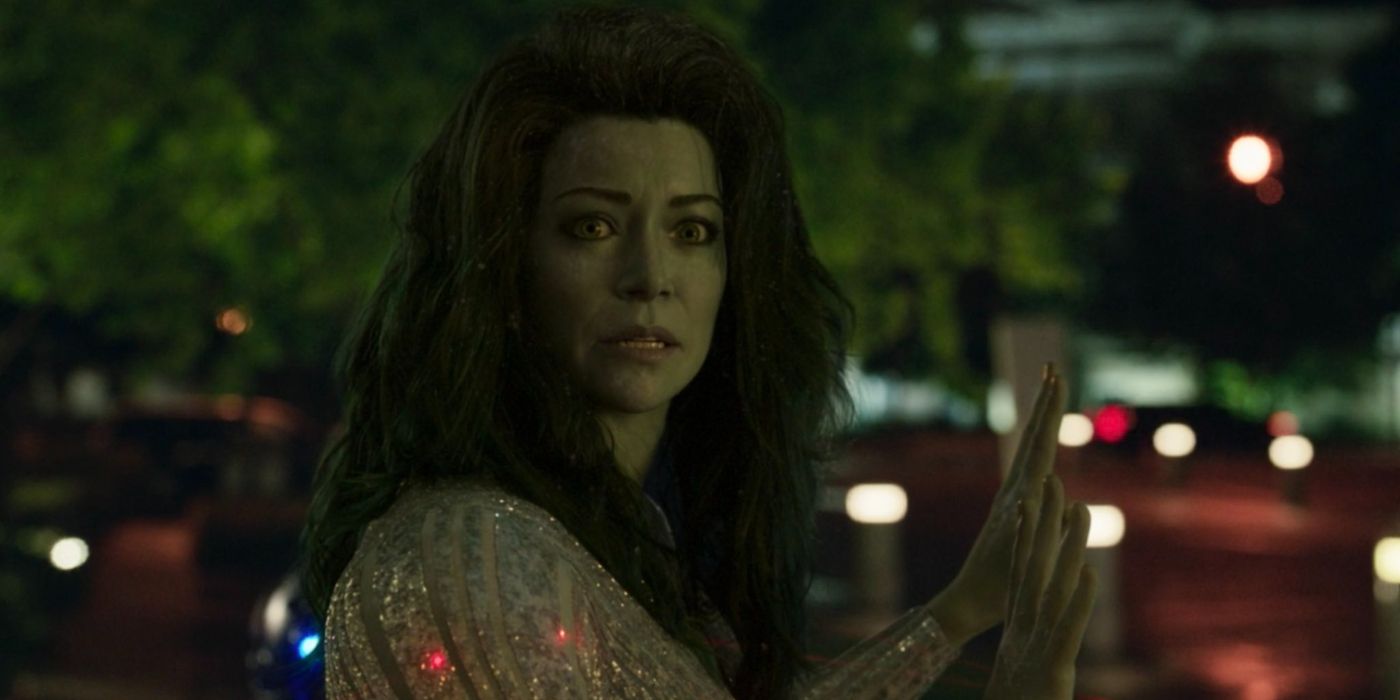 Editor’s note: The following contains spoilers for She-Hulk: Attorney at Law Episode 8.All that time we spent wondering if Titania (Jameela Jamil) was the big bad on She-Hulk: Attorney at Law, and it turns out the real villain is bigger and worse than we could have imagined. Forget Thanos, the most terrifying big bad in the Marvel Cinematic Universe is a covert organization named Intelligencia. We knew they were bad news when they were first name-dropped as a group for “hateful man babies,” but they are much more violent than expected — and they have a vendetta against Jennifer Walters/She-Hulk (Tatiana Maslany).

When we first hear about Intelligencia on She-Hulk, it seems to be a quintessential clickbait website full of memes and weird videos, like the ones uploaded of Mister Immortal (David Pasquesi) regenerating from fatal accidents. But then, when Jen’s colleague Mallory Book (Renée Elise Goldsberry) and Jen’s paralegal/ best friend Nikki Ramos (Ginger Gonzaga) do a little digging, they find a seedier side to the website — Intelligencia has an entire section dedicated to hating on She-Hulk. There are calls for She-Hulk to be canceled over unsubstantiated claims that she’s a man-hater, as well as degrading comments about her intelligence. If that’s not bad enough, Intelligencia’s members start posting death threats against Jen. Why? Oh, I don’t know, they’re just sick of hearing about her (that’s an actual post on the Intelligencia website).

Initially, Mallory brushes them off as trolls, but Nikki warns Jen about Intelligencia. Jen isn’t bothered, and she’s also really busy. This is where the scary part begins. At the time Jen finds out about Intelligencia, she’s on Cloud 9 with her new beau, Josh Miller (Trevor Salter). He knows exactly what to say to her and is pretty much Mr. Perfect. Having met during Jen’s old friend’s wedding, where everyone was generally horrid to Jen, Josh was the only shining light at the event, funny, charming, and willing to go at Jen’s pace. But after a much-awaited night together, Josh disappears—because it turns out he’s actually HulkKing, the leader of Intelligencia. He’d conned his way into Jen’s life for nefarious purposes. He was after Jen’s DNA and had unleashed the Wrecking Crew to ambush her. But what he eventually does is much, much worse. Burn in hell, Josh!

What’s frightening about how Intelligencia is presented on the show is that the group reflects reality. The memes and posts that Mallory and Nikki scroll through echo comments many women, people of color, and the queer community have had to face in real life, especially in online spaces. And it’s not just people in the public eye who become targets; everyone’s fair game online, and unfortunately, minority communities bear the brunt of this hate. Recently, several female journalists in Canada became the targets of coordinated, online attacks, and after years of targeted harassment against the trans community, Kiwi Farms was finally shunted off the internet.

Every villain has a motivating factor. Most of the time, it’s greed, lust, or power. But unbridled prejudice is a whole new level of villainy. HulkKing and his ilk hate Jen simply because she’s a woman who exists and who is proudly and vocally living her best life as an attorney and a superhero. And they’re allowed to run rampant on the internet with no oversight and repercussions.

The especially unnerving part of Intelligencia is that they are insidious, they prey on people’s insecurities— be it their own members’ uncalled-for fears of women’s existence, or in Josh’s case, he feeds on Jen’s insecurities about not succeeding at romance — and they use technology to bring their targets down. Josh ghosting Jen was bad enough, but he proceeds to humiliate Jen on her big day. At the Female Lawyer of the Year award ceremony, Jen’s speech is interrupted by screenshots of data on her phone, mostly pictures of Captain America (or rather, his derrière). Josh copied these off her phone without Jen’s knowledge. Josh also took a video of himself and Jen together (again, without her consent!) and the video is played at the ceremony, on a giant screen, in front of Jen’s parents, her colleagues, and her peers. This dips into revenge porn territory, which has a devastating impact on victims. It’s such a needlessly cruel thing to do, and we know that Bruce Banner/Hulk (Mark Ruffalo), for all the damage he’s accidentally caused, has not had to face this type of sexual harassment.

She-Hulk: Attorney at Law creator and head writer Jessica Gao has said that she was keen to bring different women’s lived experiences to the show, and the result is a series that looks at the many ways that women have to navigate an overtly bigoted society—online and off. The creative team has taken inspiration, if you can call it such, from actual comments made by men online about the show before it even aired, and the progression of Intelligencia from being losers on the internet to a tangible threat to Jen is an analogy of how often the powers-that-be dismiss trolling and online comments without addressing how doxxing and death threats can affect real people.

Intelligencia may have started off as a joke, but that’s what makes them a particularly powerful villain. No one took them seriously, not because they aren’t a danger, but because authorities often don’t recognize online hate speech as real threats. You can kill Thanos, but hate and prejudice don’t disappear overnight. By the end of Episode 8, Intelligencia’s actions enrage Jen to the point that she literally starts smashing everything, terrifying the people around her. She looks like a monster, but all she’s doing is fighting back. Intelligencia has effectively discredited Jen, even though they were the ones who pushed her to the edge and led to her losing control of her rage, which is a perfectly normal reaction to extremely stressful situations. The group has probably done this with the hopes of ending her career, not just as She-Hulk but as Jennifer Walters, the attorney. If that’s not a villainous thing to do, what is?