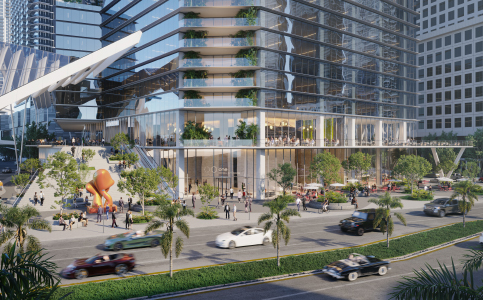 Miami has approved Brickell City Centre’s planned 2023 work on a vast tower with what the developer says are the largest office floor plates in the region and a temporary fire station within the mixed-use complex.

The global developer agreed to construct a temporary and then a permanent city fire station.

Commissioners had put off a final vote Sept. 13 and directed staff to report the status of the fire station.

He said, “It is about four blocks from Fire Station 4, an existing fire station, and when you consider the one-way streets that are surrounding that area, and the area where we are trying to concentrate services for those citizens, it will take approximately the same amount of time to respond from that station as it would Station 4.

“I would have concerns that we are not truly enhancing service as we would if it were in the north square site of Brickell City Centre (being further east and north of the main development),” the chief said.

At commissioners’ direction, staff and fire officials then met with Swire to resolve the issue. The chief and a Swire rep reported they’d agreed to continuity of service between the temporary and permanent fire stations, and Swire is to search northeast Brickell for the best site for the permanent station.