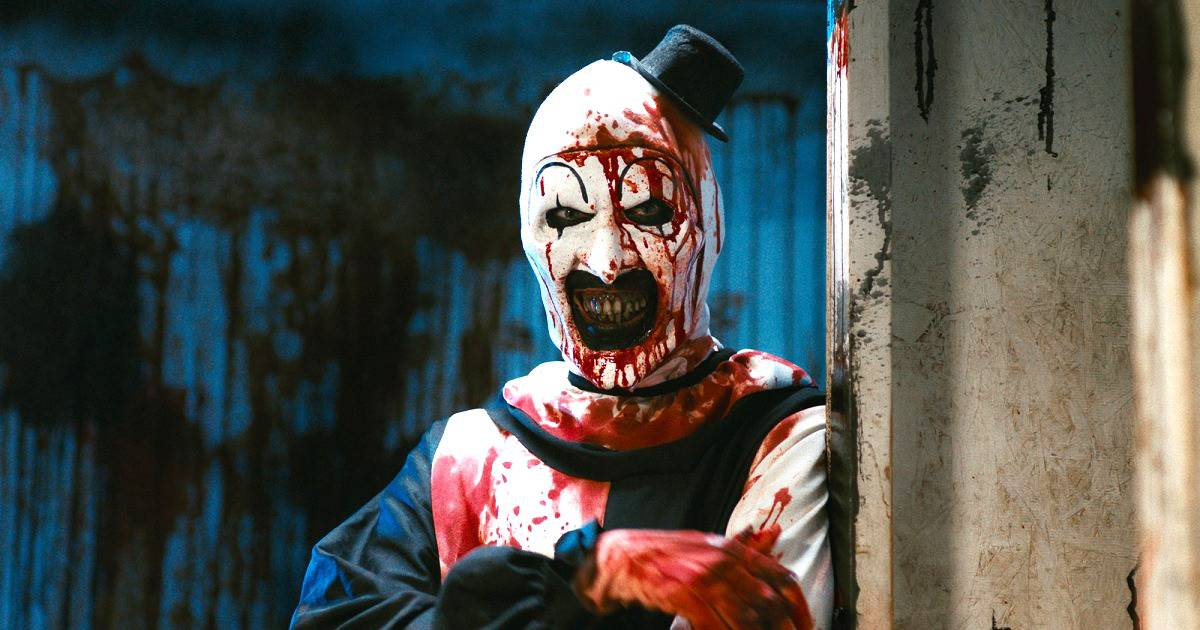 PLOT: Homicidal maniac Art the Clown returns to ruin another Halloween – and this time he seems destined to clash with a young woman named Sienna, who is celebrating the holiday in an angel warrior costume.

REVIEW: Writer/director Damien Leone has been telling stories that involve his maniacal creation Art the Clown ever since shooting a short film called The 9th Circle back in 2006. A short that ended up being one of the segments in his 2013 anthology film All Hallows’ Eve, which had Art or references to Art dispersed throughout its 83 minute running time. The character really captured the horror community’s heart and imagination when Leone made the 2016 feature Terrifier, a simple slasher that mostly took place in one location and featured Art making a mess of several people over the course of its 84 minutes. Now Art is back in Terrifier 2 – and the fact that Leone has already been telling Art stories for sixteen years may make it easier to understand why this first sequel feels like the sort of off-the-rails sequel you don’t usually reach until much later in a franchise.

Terrifier 2 sports a running time of 138 minutes, but don’t let that lead you to believe there’s a lot more going on in this movie than in the average slasher. The story Leone tells with this movie and the events we’re shown could have easily played out over 90 minutes, but instead it’s dragged out for 48 minutes longer than it needed to be. Scenes go on and on, and the running time is padded with trippy supernatural / hallucinatory sequences. For some reason, there’s an attempt to build up the clash between Art and the film’s final girl as some kind of epic battle that has been prophesied and involves a magical sword, but it’s not properly explained and doesn’t make any sense. Maybe Leone wants to save the explanations for a Terrifier 3 – but with 138 minutes to work with on this one, he had plenty of time to give the explanations here. Imagine if the Friday the 13th franchise had jumped directly from part 1 or 2 into the supernatural insanity of Jason Goes to Hell, and didn’t bother to tell us why things had suddenly gotten so weird. That’s kind of what it’s like to watch Terrifier 2. There are so many “latter sequel” type elements packed into this, it almost feels like Leone wanted to run the franchise into the ground already.

If there’s a saving grace to Terrifier 2, it’s the performances of the leads. David Howard Thornton, who took over the role of Art in the first Terrifier film, reprises the role here, and is brilliant as the silent killer who gets a lot of entertainment out of tearing people to pieces. Lauren LaVera is our heroine Sienna, who has put together a warrior angel Halloween costume that’s inspired by a comic book-style character her late artist father created for her. Sienna isn’t a particularly interesting character, nobody in the movie really is (and some of them are quite annoying), but LaVera comes off like a badass when she has a showdown with Art while wearing that costume and wielding her magical sword. Watching the movie, I had the feeling that we’re going to see a lot more of LaVera in the future, and she’s probably going to be kicking ass in the projects she shows up in. Now I see that her IMDb biography mentions, “aside from her acting career, Lauren has 19+ years experience in martial arts including Taekwon-Do, Jiu Jitsu, Kun Khmer, Wushu, and Muay Thai”. She has studied boxing and kickboxing, and has weapon and firearms training. Yeah, she’s definitely an action heroine in the making – and she has already entered the Marvel world, as she played a character with martial arts skills in an episode of the Netflix series Iron Fist.

Sleepaway Camp’s Felissa Rose, Cobra Kai’s Griffin Santopietro, professional wrestler Chris Jericho, and Halloween 5’s Tamara Glynn show up for very quick cameos – and the nod to Halloween 5 is the most fitting, because there are aspects of Terrifier 2 that reminded me of that film. Sienna has a couple friends who are so irritating and stupid, it made me think of how much a lot of viewers hate the teen characters in Halloween 5. Aside from Sienna, the new character fans will probably enjoy the most is Art’s sidekick The Little Pale Girl (Amelie McLain), who is a female child version of Art that he plays pattycake and dissects animal corpses with. She’s another thing in the movie that doesn’t make any sense, but she’s creepy to look at.

Of course, you can’t talk about a Terrifier movie without talking about the gore and brutality. Some of Terrifier 2’s interminable running time is dedicated to showing us gore-soaked slasher kills, and Leone made sure to make them look as disgusting as possible. A few of these kills are ridiculously drawn out, much like the movie itself.

I found All Hallows’ Eve to be entertaining, and really enjoyed Terrifier. I was glad to see that movie catch on with the public the way it did. But Terrifier 2 was a letdown for me. There are definitely some cool things about the movie – Thornton is awesome, LaVera has a bright future, I loved the synth score by Paul Wiley – but it was way too long and nonsensical. It’s not interesting enough to sustain the bloated running time, so getting through it felt like a slog. It’s the kind of sequel you would expect to have a number like 7, 8, or 9 attached to it… and yet it’s just a number 2.

Terrifier 2 will be in theaters on October 6th, from Cinedigm in partnership with Iconic Events. 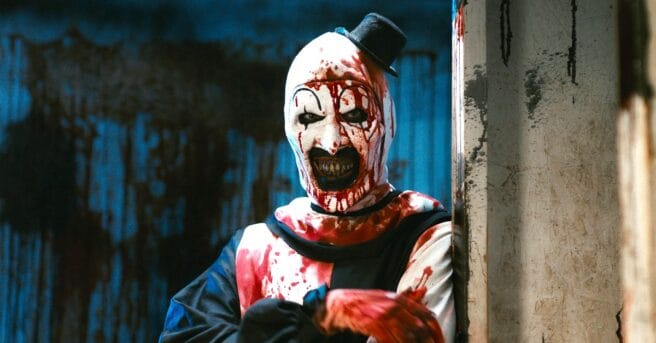