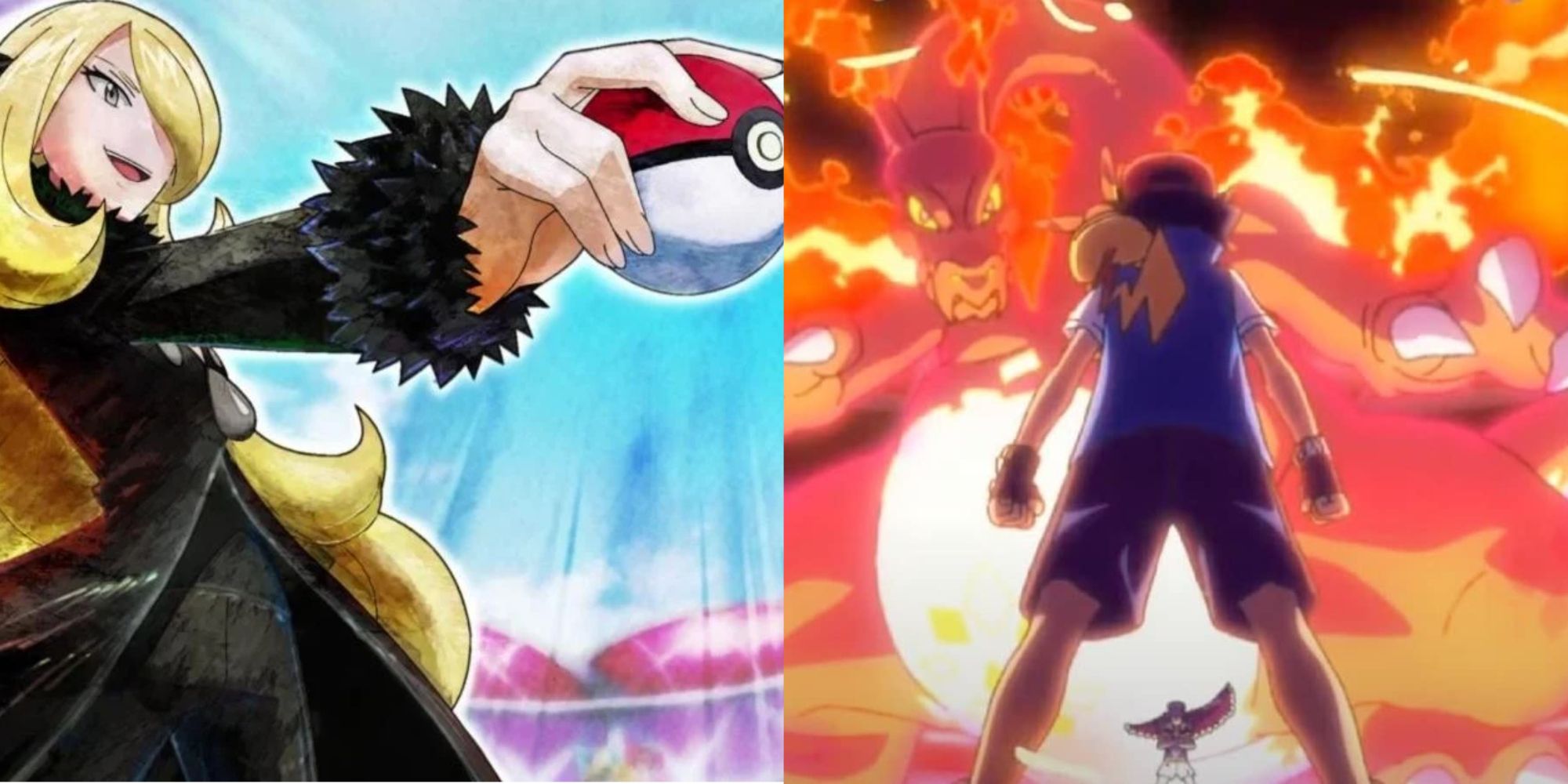 Pokémon Scarlet and Pokémon Violet will bring with them a new chapter of the popular video games along with the anime. Fans may not know what the story has in store for Ash after his recent world championship title, but there’s sure to be a huge change of some type.

Ash’s path through the Pokémon World Championship was the central theme in the new Pokémon Journeys anime, and he had some of the fiercest battles that he’s ever fought throughout the course of the tournament. However, the highlight was the Masters Eight tournament that came towards the end, where even fan-favorite characters other than Ash got time to shine and prove why they’re some of the strongest trainers in the world.

Champion Leon and Galar’s final Gym Leader Raihan have been rivals for a long time, and the Duraludon master put up a great fight against the undefeated champion.

Leon and Raihan’s battle was another way to set up just how powerful Leon really was, but it also showcased two of the most fearsome Pokémon in the Pokémon World Championships: Raihan’s Gigantamax Duraludon and Leon’s Gigantamax Charizard. Leon’s Charizard became the face of the entire tournament and the biggest hurdle for Ash to climb throughout the 130-episode anime, so getting to see it in action was a big deal for fans of the season’s antagonist.

The battle of Charizard’s was one of the most fun parts of the Masters Eight’s first round, with Alain’s Mega Charizard facing off against Leon’s Charizard. What made the battle even more impressive was Leon’s Charizard not being the one that Gigantamaxed in the battle, that honor went to his Rillaboom. The fight proved to fans that Leon was leagues above Alain, and that Ash was capable of outgrowing his past losses were he to win the Masters Eight tournament.

Bea’s Grapploct and Machamp were two of the largest walls facing Ash early in the Journeys series, and Ash’s biggest Pokémon Journeys loss was an early loss to Bea and her Grapploct.

When it came down to the ultimate battle between Ash and Bea in the Master’s Eight tournament, Ash was able to clinch the fight in a climactic battle between Gigantamax Machamp and Mega Lucario. The battle was a great showcase of Ash’s growth throughout the Pokémon Journeys adventure, with his evolved Riolu, who failed to beat Bea in their first match, becoming the partner that clinched the win for Ash and his team.

Paul was Ash’s biggest rival throughout the Diamond and Pearl anime, and like other characters throughout the 25 years of the show, Paul made an important cameo. Paul gave Ash practice against the ace Pokémon of the other champions, teaching him important lessons.

It was an episode of redemption for Paul, who was often cruel and arrogant during his time as Ash’s rival. He was a proper training partner and gave Ash important tips that helped him later on in the tournament. It was also the most important battle outside the World Championship tournament games in the entire Journeys series, giving an old favorite rival a chance to shine before Ash went on his biggest adventure yet.

Ash and Iris were best friends and companions for much of the Pokémon series. However, they found themselves as competitors around the halfway point of Pokémon Journeys, with Dragon-type master Iris facing off against Ash’s own Dragon-types: Dracovish and Dragonite.

The mirror match of Ash’s Dragonite against Iris’s own Dragonite was a fun battle, but the real star of the battle was when Ash’s Dragonite faced off against Iris’s signature Haxorus. It was Dragonite’s biggest moment in the series, as the Pokémon didn’t get the chance to showcase its talents in the Masters Eight tournament as much as other favorites like Pikachu and Lucario did.

Iris may be the Dragon-type master of the series, arguably surpassing Lance, but even her dragons were no match for Cynthia’s Mega Garchomp. Cynthia’s Garchomp was one of the most memorable battles in the original games, and it lived up to those expectations in the anime.

Garchomp and Haxorus had one of the top one-on-one battles in the series, and Iris finally got to prove herself against her idol. It was sad for many fans to see Iris get dejected after the match, but she proved that she was a worthy champion and earned her spot in the Masters Eight tournament. Even Ash never faced off against Cynthia’s Mega Garchomp, and it’s unknown how he’d have fared against it.

Lance was the original champion of the games and one of the strongest trainers in the Masters Eight tournament. However, he found himself with a tricky matchup of Dragons against Fairy-types in the battle against Kalos Champion Diantha.

Lance’s team of dragons proved to be unable to stand up to Dianthas Mega Gardevoir, but the lead-up to the final clash between Dynamax Dragonite and Mega Gardevoir was what made it so interesting. Diantha used a “dual-screens” strategy that’s mostly seen in competitive Pokémon to protect her Gourgeist, and used Trick-or-Treet to make Lance’s Gyarados weak to her Ghost-type moves. It was an interesting battle with many fun strategies and was a surprisingly fun episode despite not having the big-name champions.

A proper battle between Ash and Steven was a matchup that many fans have been waiting on for over a decade, but that’s how long it’s taken Ash to get to the level of a champion. Fans finally got to see Steven’s Mega Metagross go up against Ash’s Pikachu, and it didn’t disappoint.

The only thing about the match that may have upset fans was that it happened in the first round, but one of the major three champions would need to fall early if Ash were to face all three of them. Steven’s shiny Metagross was impressive throughout and was even more impressive once it became Mega Metagross. Ash’s Z-Move with Pikachu to clinch the battle and defeat Steven was a poetic finale to the first round of Masters Eight.

The battle between Ash and Cynthia was arguably the most anticipated battle in Masters Eight. Thankfully, the anime finally let fans see the battle in a semifinal match that was arguably one of the best battles in the history of the franchise.

Cynthia’s star of the early portion of the fight was one that many didn’t expect: her Spiritomb. Spiritomb was able to tear through Ash’s team and, most importantly, used a sneaky Destiny Bond to defeat Ash’s signature Pikachu. Her masterful use of Spiritomb proved why Cynthia was one of the top four trainers in the world. The conclusion of the battle featured Mega Lucario against Dynamax Togekiss and Cynthia’s ace Garchomp, and Lucario was able to will itself to victory by getting incredible back-to-back wins against two of Cynthia’s strongest Pokémon.

In the final match that everyone had anticipated for over 120 episodes, Ash and Leon brought arguably the two most iconic Pokémon in the entire franchise as their aces: Pikachu and Charizard.

The four-episode-long battle showcased why both trainers were among the best in the world. They both employed unorthodox strategies, like Leon’s Mr. Rhyme skating on an ice field to use Triple Axel and Ash’s Sirfetch’d attacking the Psychic Terrain itself. The battle culminated in an incredible final battle between Ash’s Pikachu and Leon’s Charizard, with Ash’s long-time partner Pikachu cementing itself as the MVP of the Master’s Eight tournament after defeating Cinderace and Charizard in back-to-back battles for the win.