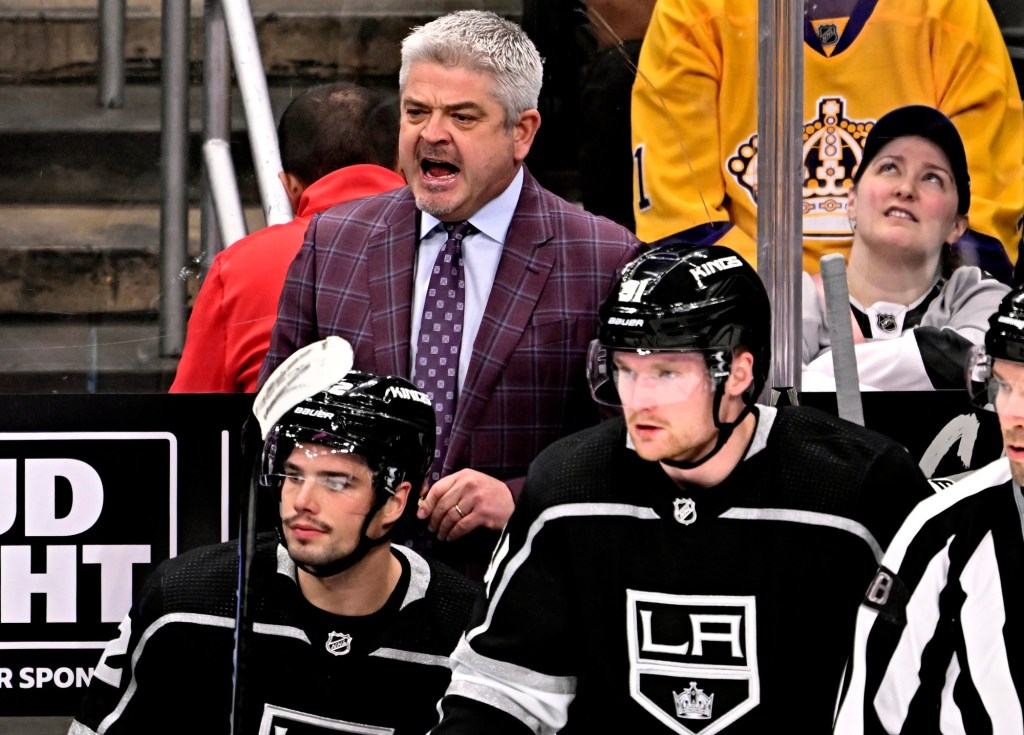 Going through a three-game losing streak and, more generally, a step-forward-step-back season, the Kings will face a familiar foe in confines very familiar to their coach, Todd McLellan.

They will dive into the Shark Tank in San Jose on Friday, where McLellan led the Sharks from 2008 to 2015. While he said there were some greetings and fist bumps to go, McLellan largely viewed the visit as just another game.

“I’ve been gone for so long. I have a lot of friends there and stuff like that, and there’s always my individual memories. But it doesn’t do much for me to go back into that building,” McLellan said.

There are four players left from his tenure: forwards Logan Couture and Tomas Hertl, defenseman Marc-Edouard Vlasic and winger Matt Nieto, who was the only player from the squad to leave and return.

“Great players, good people, but Kopi and Kempe and Lizotte and those guys are really important now, not so much Cootch and Pickles and those guys,” said McLellan.

Under both McLellan and his successor, Pete DeBoer, the Sharks were a model organization, thanks in large part to the astute stewardship of general manager Doug Wilson. Wilson spent nearly 20 years as San Jose’s top manager, but before this season gave way to Mike Grier, the NHL’s first Black GM.

After gaining momentum that culminated in a trip to the Stanley Cup Finals in 2016 and a run to the conference finals in 2019, much of the Sharks’ downfall in recent years has been tied to poor goaltending. At times this season, the Kings have certainly been able to relate to that struggle.

The Kings are dead last in save percentage with a paltry .882 mark. That burden was shared by Jonathan Quick (.892) and Cal Petersen (.876). McLellan said that both goaltenders made some excellent saves and that the skaters in front of them need to limit the mistakes that led to a lot of danger points.

“I would say there is concern,” McLellan said. “But we have to work on that save percentage as a group. Not just the goalkeepers, but as a group we need to increase that number.”

Yet McLellan also acknowledged – – and lamented – – the comeback nature of two goals that factored significantly into the Kings’ last two losses. They were both poorly timed and, from a goalkeeper’s perspective, preventable.

Against Seattle on Saturday, the Kings took a 2-1 lead and then gave up an equalizer that Petersen beat cleanly between his pads just 18 seconds later, ultimately leading to an overtime loss. The New York Rangers produced a similar momentum swing on Tuesday. After the Kings tied the game, the Rangers struck less than a minute later off a seemingly innocuous short-side shot that Petersen would no doubt like back.

Although the Sharks have continued to flounder this season — they are the only team other than the Kings to have played 22 games but have seven fewer points to put them near the Pacific Division’s basement — they have historically posed a challenge to the Kings through both high seas and low tides.

The two clubs have split their past six meetings, but San Jose has taken eight of the previous nine. The Sharks won the bulk of regular-season matchups, but the Kings prevailed in two of three playoff series, including a rally from an 0-3 deficit in 2014 that propelled them to a razor-thin Stanley Cup was won.

On the injury front, defenseman Sean Durzi continued to make progress in his recovery after missing the past two games and could return on Friday. Winger Alex Iafallo recently shed his walking boot and resumed on his own in a limited capacity while recovering from a lower-body injury.

For San Jose and defenseman Erik Karlsson, the past three campaigns have been to forget. While the Sharks have continued to lose, Karlsson has seen his production skyrocket and is on track for a career season, and what a career he has had.

Karlsson, 32, has been compared to Swedish greats such as Borje Salming, who died Thursday at 71, and Nicklas Lidstrom, who won seven of the 10 Norris trophies won by a Swede. Karlsson has won the honor twice, in addition to being a four-time finalist. Tampa Bay’s Victor Hedman was the most recent Nordic nation winner.

Karlsson leads both San Jose and all NHL defensemen in scoring this season with 30 points in 22 games, the 10th time in NHL history that a defenseman has scored 30-plus points in his first 22 outings. He has thrived anew despite the departure of another offensive-minded blueliner, Brents Burns, who was traded to Carolina last summer after 11 campaigns as a Shark.