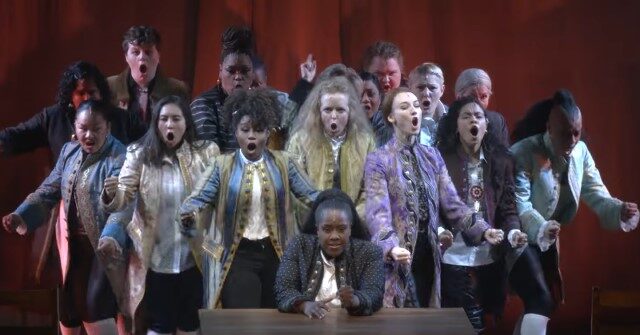 The new Broadway revival of the classic musical 1776 features a cast comprised entirely of women, transgender, and “non-binary” actors. The woke staging, courtesy of the prestigious Roundabout Theatre Company and American Repertory Theater, officially opened Thursday at the American Airlines Theatre in New York, with a national tour expected to kick off next year.

1776 dramatizes the signing of the Declaration of Independence, following John Adams (played by actress Crystal Lucas-Perry) as he attempts to persuade members of the Continental Congress in Philadelphia to declare independence from Britain.

Among the transgender and “non-binary” cast members is a performer named Sav Souza in the role of founding father Dr. Josiah Bartlett, who represented New Hampshire in the Continental Congress. Souza recently declared on Instagram that transgender people existed back in 1776.

“Trans People Have Always Existed – they existed in 1776, and they absolutely exist ON BROADWAY!” the actor wrote alongside a photo displaying what appears to be her double mastectomy scars.

The musical, written by Sherman Edwards and Peter Stone, debuted on Broadway more than 50 years ago in 1969 and has since become an enduring theatrical favorite frequently revived at regional and community theaters around the country. A movie adaptation starring Ken Howard and William Daniels was released in 1972.