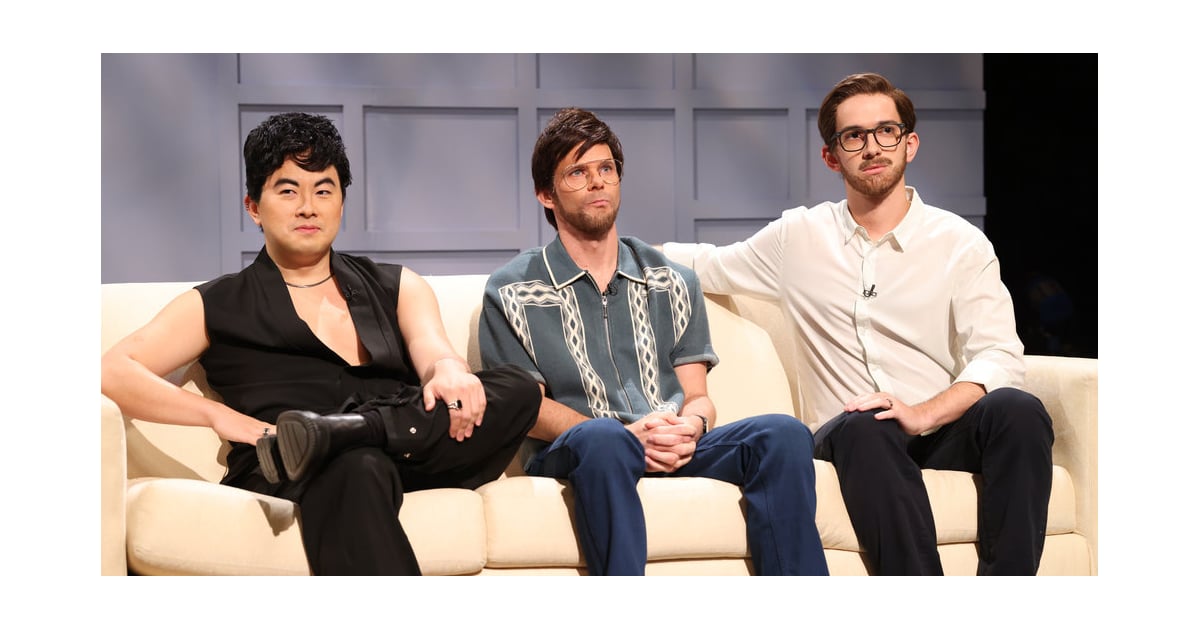 “Saturday Night Live” is facing backlash due to a Try Guys parody sketch that aired during the Oct. 8 episode hosted by Brendan Gleeson. The skit skewered a recent video the guys — Eugene Lee Yang, Zach Kornfeld, and Keith Habersberger — released explaining their decision to fire their fourth member, Ned Fulmer, after it was revealed that he had a workplace affair. While the sketch makes light of the trio’s response to their friend and coworker’s infidelity, Twitter users are calling out the NBC series for taking aim at the remaining Try Guys rather than Fulmer. (POPSUGAR reached out to the Try Guys’ representatives for comment on the sketch but did not receive an immediate response.)

In the skit, Bowen Yang, Mikey Day, and Andrew Dismukes play Yang, Kornfeld, and Habersberger, who appear in a breaking-news segment on CNN hosted by Gleeson, who appears as a reporter well-versed in the drama. Meanwhile, Ego Nwodim plays a baffled anchor who doesn’t understand why the Try Guys’ situation is newsworthy.

“It’s obviously an evolving story, but CNN can confirm that the Try Guys have released an official Youtube video clapping back at ex-Try Guy Ned Fulmer, the wife guy–Try Guy,” Gleeson says in reference to Fulmer cheating on his wife, Ariel Fulmer. Day responds, “Worse, he committed the heinous act of having a consensual kiss and not telling us, his friends.”

Twitter users quickly came to the Try Guys’ defense after the sketch aired. One user tweeted, “I should not care this much but snl doing a try guys bit where they make fun of NOT Ned but the other three for holding him accountable for all his sh*t and being hurt by it is so nasty like pls tell me more abt how funny you think a man cheating on his wife with his employee is.” Another added, “This feels reductive of a situation in which there was a big power imbalance in a unethical relationship in the workplace. not to mention the families, employees, and friends hurt by this now have to see their pain being trivialized for a skit? feels weird.”

As multiple fans of the Try Guys pointed out, the “SNL” skit missed the larger issue of the power imbalance that existed between Fulmer and associate producer Alex Herring, whom he had an affair with. “This Try Guy sketch on #SNL started funny,” a Twitter user wrote. “Then it got mean for no reason. Whoever wrote it definitely missed the whole ‘Ned nearly destroyed the entire company and risked getting them sued for sexual misconduct’ angle.”

For their part, the Try Guys seemed to have handled the real-life situation swiftly by prioritizing the well-being of their employees. “All of that information was just as shocking to us as all of this has been for you this week,” the guys said in the Oct. 3 video statement parodied by “SNL.” “And thus began a three-week process of engaging with employment lawyers, corporate lawyers, HR, PR, and more in order to make sure we were taking all necessary steps. From the jump, we were acutely aware of just how contrary this was to the values of the company we’ve built and those of everyone who works here. This is something we took very seriously. We refused to sweep things under the rug. That is not who we are and is not what we stand for.”