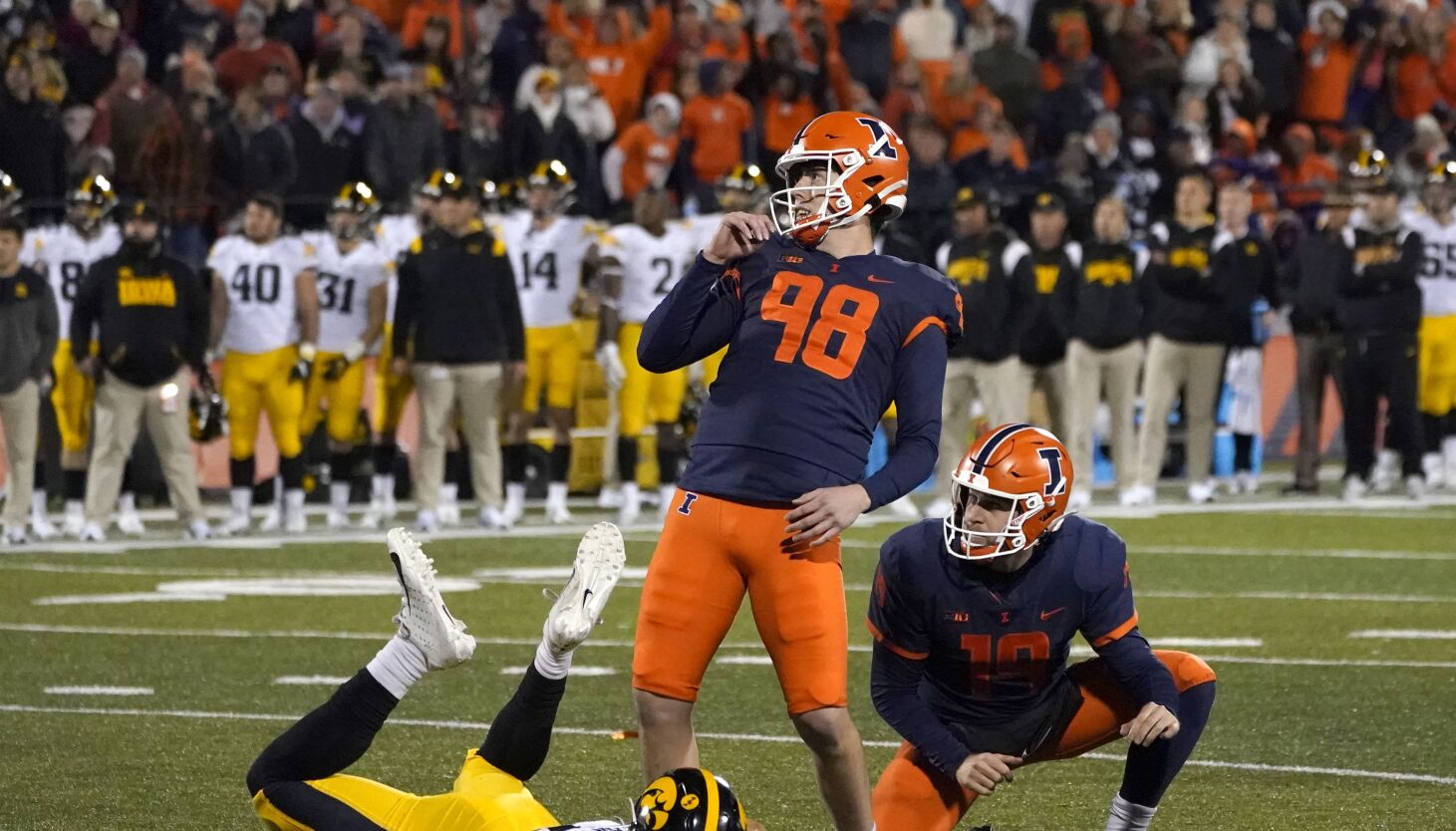 CHAMPAIGN, Ill. (AP) – Backup walk-on kicker Fabrizio Pinton hit a 36-yard field goal with 2:46 left and Matthew Bailey made a late interception to lift Illinois to a 9-6 victory over Iowa on saturday evening , his first over the Hawkeyes since 2008.

Iowa (3-3, 1-2) looked like it might escape Champaign with a dramatic victory, but Riley Moss’ 82-yard punt return for a touchdown was overturned after review when officials determined the quarterback’s wrist Illinois safety Art Sitkowski was down. before he loses the ball.

Pinton was called into action due to an injury to starter Caleb Griffin and went 3-for-3 on the night, including makes of 37 and 27 yards.

“(Take) some deep breaths,” Pinton said. “Get your reps in the nets. I feel good. I just went out there and (kicked).”

A field goal was once again the difference for the Illini, who beat Iowa in 2008 on Matt Eller’s 46-yard field goal with 24 seconds left.

Illini coach Bret Bielema said Pinton was told “at kickoff” that he was going to take field goals after Griffin, who has been day-to-day, told staff he wasn’t feeling not good enough to go.

Sitkowski went 13 of 19 for 74 yards passing and an interception after Illinois starter Tommy DeVito left the game in the first quarter with what appeared to be a left leg injury.

DeVito completed 6 of 11 passes for 42 yards before the injury.

Iowa struggled to move the ball as Spencer Petras completed 18 of 36 passes for 170 yards and an interception.

Petras picked up five sacks and the Hawkeyes rushed for just 52 yards.

“I think part of that showed tonight, we have some issues early,” Ferentz said. “We’re young and inexperienced. Again, I think we made progress last week in that regard. Tonight, not so much.”

Sitkowski tallied 10 completions for 16 yards before he eventually connected with Brian Hightower for a 34-yard completion to move into Iowa territory early in the fourth. The Hawkeyes defense had yet to allow such a big gain through five games.

Illinois didn’t turn it into points, as Sitkwoski was intercepted by Quinn Schulte at the 1-yard line a few plays later.

Chase Brown topped 100 yards rushing for the seventh time this season for the Fighting Illini, more than any other rusher in school history. He finished with 146 yards on 31 carries after entering the week leading the country in rushing yards.

“I knew Chase was going to grind it out, break it down and make a couple of big plays,” Bielema said. “And that’s exactly how it played out.”

Iowa kicker Drew Stevens tied it from 32 yards later in the quarter before Pinton pushed Illinois ahead.

A pair of Isaiah Williams fumbles set Iowa up first, once at the Illinois 9-yard line, but the Hawkeyes settled for a 27-yard field goal by Stevens to tie the game at 6. in the middle.

Five of Iowa’s six drives went for negative yardage during the second and third quarters.

Ferentz said he would not fire his son and offensive coordinator Brian Ferentz during the Hawkeyes’ bye week after another dismal showing.

Iowa’s offense has been held to seven or fewer points in half of its games this season.

Bielema said he didn’t believe the Illini’s injuries were “catastrophic” and that DeVito was “aggravating” an ankle injury in the first quarter. DeVito completed 107 of 153 passes this season for 1,121 yards, nine touchdowns and two interceptions.

Illinois: No one outside the locker room saw the Illini as a Big Ten West contender in August, but that’s where they are midway through the season. Bret Bielema’s team could take firm control of the division lead when Minnesota (4-1, 1-1 Big Ten) visits next week.

Iowa: It’s time for the Hawkeyes to do some serious thinking about their offensive identity. Despite plenty of opportunities, the Hawkeyes completed 49% of their passes and averaged 1.7 yards per rush. That he doesn’t want, even with his stellar defense.

Iowa: The Hawkeyes have a bye before a tough matchup at No. 3 Ohio State on Oct. 22.