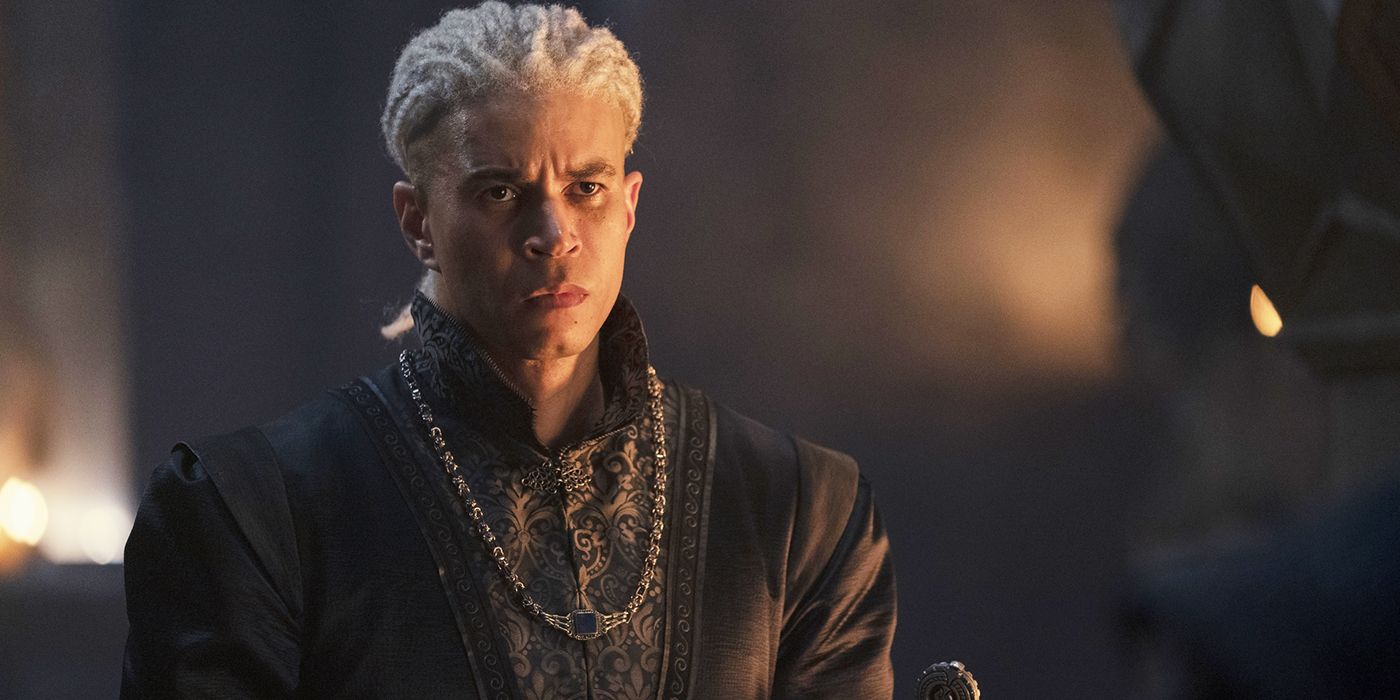 Contents hide
1 Does Laenor Die?
2 How Does Laenor Survive?
3 Why Did Rhaenyra and Daemon Plan His Death?
4 How Does This Deviate From the Books

Editor’s Note: The following contains spoilers for Episodes 1-7 of House of the Dragon.Leave it to House of the Dragon to end an episode with a massive plot twist. Episode 7 set up many things for the future of the Dance of Dragons, making it a turning point in the series. Mourning the loss of Laena Velaryon (Nanna Blondell), the whole family is brought together in Driftmark to attend her funeral. Viserys (Paddy Considine) is present along with Alicent (Olivia Cooke), as is the newly minted Lord Larys Strong (Matthew Needham) and the re-minted Hand of the King, Otto Hightower (Rhys Ifans). Rhaenyra (Emma D’Arcy) has arrived with Laenor (John Macmillan) and their two older sons, met by the Velaryons, including Rheanys (Eve Best) and Corlys (Steve Toussaint). Daemon (Matt Smith) has returned from Pentos with Laena’s body and his two daughters. For some, this is the first time in a decade that they’ve been reunited, and tension and emotions run high.

The episode primarily centers around Rhaenyra reuniting with her uncle Daemon, the legitimacy of her children, and the establishment of the Blacks versus the Greens. We see Rhaenyra and Daemon finally get together after years apart, and she will eventually take him as her husband by the end of the episode. But, first, they have to take care of the one thing in their way: her husband.

In order to marry Rhaenyra, Laenor must be out of the picture, but does that mean that he dies? For many fans of the book Fire & Blood by George R. R. Martin, Laenor’s death has been written in the stars for a long time. During his conversation with Rhaenyra, he confesses that he has not been the perfect father to their children and promises to be a better father and husband in the future. The conversation also reveals that while the two of them tried to bear children together, none came. Because Rhaenyra was aware of his sexuality before marriage, they both came to an understanding and would find sexual pleasure elsewhere. Unfortunately, this meant that Rhaenyra’s sons were actually Ser Harwin’s (Ryan Corr) and not Laenor’s.

Despite this sort of freedom, we know from Episode 6 that the last decade has not been ideal for Laenor. Although he’s indulged himself, he has not been free to be himself out in the open. We see in this episode that Alicent makes a snide remark referring to Laenor’s sexuality in front of everyone, and we know that homosexuality is heavily stigmatized in Westeros. He outright tells Rhaenyra that he sometimes hates the gods for making him how he is, but she reassures him that she does not, and he is a good man with honor. It is clear that this is not a man she wants to see dead, so Laenor does not die.

How Does Laenor Survive?

It is not revealed until the last scene that Laenor not only survived Qarl’s (Arty Froushan) attack but is sailing off with him, his head now shaven to hide his Valyrian heritage. But how did they get there? When Rhaenyra and Daemon are speaking, she tells him that she loves Laenor, and Daemon tells her to grand him a kindness and set him free. What initially sounds like a cruel kindness, is actually a reality. It is clear that this is the moment that he and Rhaenyra formulate a plan to fake Laenor’s death.

We then see Daemon approach Ser Qarl and pay him gold, telling him, “There are places across the Narrow Sea where it doesn’t matter what a man’s name is, only how much gold he possesses,” asking for a quick death with witnesses. As someone who has spent time in Pentos, he knows that they are not nearly as prejudiced about sexuality there. It is a place that Laenor can escape to without the pressure of being king consort or the pressure to hide who he really is. But on the first watch, it seems like Daemon is acting on behalf of both himself and Rhaenyra, hiring Qarl to kill Laenor.

But knowing that Laenor does not die, things begin to fall into place. Knowing that Qarl loves Laenor means that he can be trusted with the plan, and we can tell that their dialogue before their fight is a little off when Qarl says, “You have always looked down on me,” with the audience having seen no evidence of that. Daemon kills a servant, and after Qarl and Laenor begin their loud fight with each other, the servant in the room runs off to get help, and they are given enough time to put Laenor’s boots on the man that Daemon killed. When the Velaryons rush into the hall, all they see is a burnt corpse in the fireplace with Laenor’s boots on.

Why Did Rhaenyra and Daemon Plan His Death?

Laenor’s faked death works on two fronts. One, it allows Laenor his freedom, and two, it instills fear into Rhaenyra’s enemies. Daemon tells Rhaenyra that if a king isn’t feared, he is powerless. The two of them want rumors circling that they killed Laenor. They know the truth, but their enemies will assume the worst and wonder what else they might be capable of.

This comes after the argument with the children that ended in Aemond’s (Leo Ashton) eye being cut out by Lucerys (Harvey Salder). With the issue of legitimacy hovering over their heads. Rhaenyra realizes that her marriage to her uncle will form a stronger bond and that the two of them might be better equipped against the doubters and usurpers. With Daemon by her side as her prince consort, Rhaenyra believes that her claim will not be so easily challenged. It will protect her position as heir and also her children.

How Does This Deviate From the Books

The reason why this moment is such a shock is that it is a deviation from the book. In Fire & Blood, Laenor is slain by Ser Qarl while out at a fair in Spicetown. Witnesses see the two arguing before fighting with their swords, like in the episode, though it seems Laenor’s actual death was also witnessed. Some believe that Laenor found a new lover and Qarl was jealous, while others believe that Qarl killed Laenor on behalf of Daemon, given that Daemon wed Rhaenyra not too long after this. While it’s clear the history books consider Laenor dead, Episode 7 shows us just how easily history can be manipulated by rumors and uncertainty. Qarl did fight Laenor publicly, and he was hired by Daemon, but it was all a farce, one that ensured Laenor would not end up dead, but freed.

House of the Dragon premieres new episodes weekly every Sunday on HBO and HBO Max.