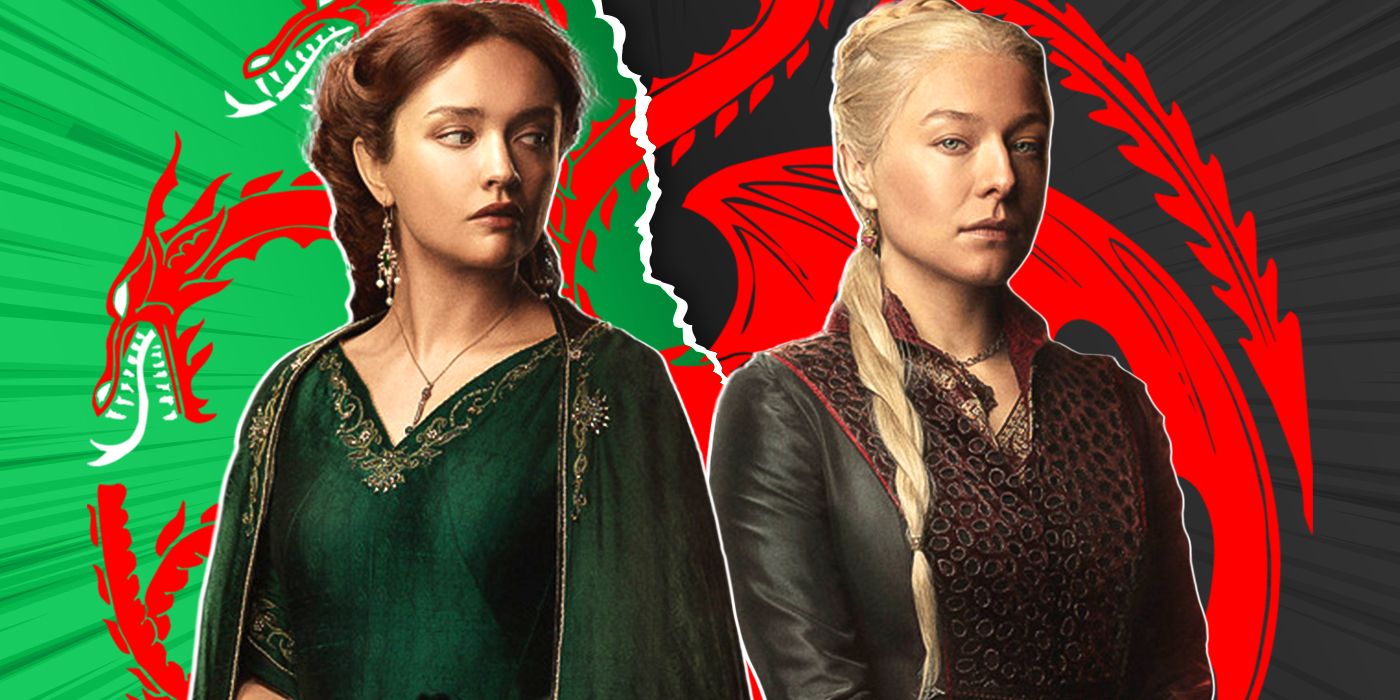 Editor’s Note: The following contains spoilers for Episodes 1-7 of House of the Dragon and Fire & Blood.House of the Dragon is currently hurtling towards a civil war that will tear the realm in two. Based on Fire and Blood by George R. R. Martin, the two sides of the fractured House Targaryen that are in conflict for the Iron Throne are commonly referred to as the Greens and the Blacks. For those who haven’t read the source material, this may be confusing, So who are the Greens and the Blacks, and which side has the advantage?

Princess Rhaenyra Targaryen (Emma D’Arcy) was named by her father, King Viserys (Paddy Considine) as heir to the Iron Throne. While a woman had never ruled before, the King had no other living children and an unpopular and volatile brother so had little choice. That was until a few years later when his new wife Queen Alicent (Olivia Cooke) bore him a son, Prince Aegon Targaryen (Ty Tennant). Many of the men of Westeros expected that upon Aegon’s second name day the King would replace Rhaenyra as heir with his firstborn son Aegon. He did not and instead continued to support his daughter Rhaenyra’s succession for the remaining years of his reign. Upon his death there are two sides who will battle for the throne, those that support Rhaenyra and those who support Aegon, but why are they called the greens and the blacks?

RELATED: ‘House of the Dragon’: What Happened in the 10 Year Time Jump Between Episodes 5 and 6?

The now iconic scene in Episode 5, “We Light the Way” in which Queen Alicent wears a green dress to Princess Rhaenyra’s wedding is a slight variation of a scene in Fire and Blood which shows us where the Greens and the Blacks got their names. In the book, this takes place at King Viserys and Queen Alicent’s five-year wedding anniversary celebration. Princess Rhaenyra is wearing a red and black dress to symbolize House Targaryen, and thus her side of the war becomes known as the Blacks. Queen Alicent, who would typically wear the colors of the House she married into on such an occasion chooses instead to wear a green dress in honor of her family – House Hightower. Her side of the war is from then on referred to as the Greens.

Who Is On the Side of the Blacks and Rhaenyra?

On the Black side fighting for the rights of Queen Rhaenyra Targaryen and her heir Prince Jacaerys Velaryon (Leo Hart) will be the men of the realm who value their honor and refuse to go back on their sworn oaths to honor and defend her rights of succession. Rhaenyra currently has 3 sons, her heir Jacaerys ‘Jace’ Velaryon, Lucerys ‘Luke’ Velaryon (Harvey Sadler), and Joffrey Velaryon who were all fathered by Ser Harwin Strong (Ryan Corr) before his untimely death. Also, on her side is Daemon Targaryen (Matt Smith) her uncle and husband, and his daughters from poor Lady Laena; Baela (Shani Smethurst), and Rhaena (Eva Ossei-Gerning). Once her greatest competition for the throne, Prince Daemon is now her greatest ally and will be of great help to her in all matters going forward.

The Velaryons are loyal to Rhaenyra even after the death of Lady Laena and the supposed death of Ser Laenor (John MacMillan). Lord Corlys (Steve Toussaint) chooses to side with Rhaenyra and her sons, though he knows they do not share his blood because they share his name. He is still trying to maintain the legacy of his family house, and without legitimate children to carry on his name he feels he must support his ‘grandsons’. With Daemon firmly siding with Rhaenyra it does make the choice simpler as the Blacks are also the side that will defend his granddaughters. House Velaryon brings the full might of their ships and wealth to Rhaenyra, making her almost impossible to beat on the water. Princess Rhaenys Targaryen (Eve Best) and Lord Corlys Velaryon are highly influential figures in the realm and having their backing, strategic planning capabilities, money, ships, and dragons is vital to Rhaenyra’s campaign.

Though technically allied with Daemon, not Rhaenyra, Mysaria aka the White Worm (Sonoya Mizuno) will be siding with the Blacks. This is essential because it gives the Blacks eyes and ears in King’s Landing and the Red Keep, while they are away at Dragonstone. With the combined forces of Rhaenyra, Deamon, and the Velaryon families, they will prove difficult to beat.

The Blacks have a far superior number of dragons, between them, they currently have 5 Dragonriders; Rhaenyra Targaryen on Syrax, Jace Velaryon on Vermax, Daemon Targaryen on Caraxes, his daughter Baela Targaryen on Moondancer, and the Queen that never was Rhaenys Velaryon on Meleys. They will also reside on Dragonstone which is known to have many wild and riderless dragons (including Ser Laenor’s Seasmoke) roaming free that they can use if they can find some brave souls willing to try and tame them.

Who Is On the Side of the Green and Alicent?

On the Green side and fighting for the rights of King Aegon Targaryen, and his future heirs will be the houses of the realm who would rather break their vows than lend their support to a woman. Aegon’s most ardent supporter is his mother Queen Alicent, and though less supportive his sister Princess Helaena Targaryen (Evie Allen), and his brother Prince Aemond Targaryen (Leo Ashton) are on his side nonetheless. The Greens have the support of the most powerful and influential members of King Viserys’s small council. The Hand of the King Ser Otto Hightower (Rhys Ifans) who brings the entirety of House Hightower with him, and Lord Commander of the Kingsguard Ser Criston Cole (Fabien Frankel).

Larys Strong (Matthew Needham) the new Lord of Harrenhal is clearly siding with the Greens, and his discretion and willingness to do whatever is needed with be valuable in the war to come. Larys is a manipulative mastermind who is planning many steps ahead, and his loyalty to the Greens may yet be conditional on their ability to give him what he wants.

In order to solidify his claim to the throne, and in true Targaryen tradition, Prince Aegon is betrothed to his sister Helaena, so that in time they can produce more Targaryen heirs. Rhaenyra already has many sons, and Aegon will need to produce some of his own quickly if he is to sway the undecided houses of Westeros to join him. Though seemingly outmatched, the Greens hold an advantage when it comes to proximity. Their chosen ruler Aegon, his mother Queen Alicent, The Hand of the King, and Lord Commander Cole all reside within the red keep with the current King Viserys. Upon his death, they will be in the best place to act quickly and quietly to sure up Aegon’s position.

The Greens may have fewer dragons but with Aegon’s younger brother Aemond bonding to the dragon Vhagar, they are not outmatched by much. Vhagar is by far the strongest and largest of the remaining dragons, twice the size of Rhaenyra’s dragon Caraxes. Aegon Targaryen rides his dragon Sunfyre, and his sister Helaena is bonded with Dreamfyre though she doesn’t often ride.

Undeclared as yet are the remains of King Viserys’s small council Grand Maester Mellos (David Horovitch), Master of Ships Ser Tyland Lannister (Jefferson Hall), and Master of Coin Lord Lyman Beesbury (Bill Paterson). These men and all the Great and Lesser houses of the Seven Kingdoms will soon be called upon to make their choice. Some will be swayed by promises of future advantage, royal marriage, and prosperity; Others by their loyalty, duty, and honor; and some will seek to remain neutral to avoid the dreadful price this war will cost all those involved.