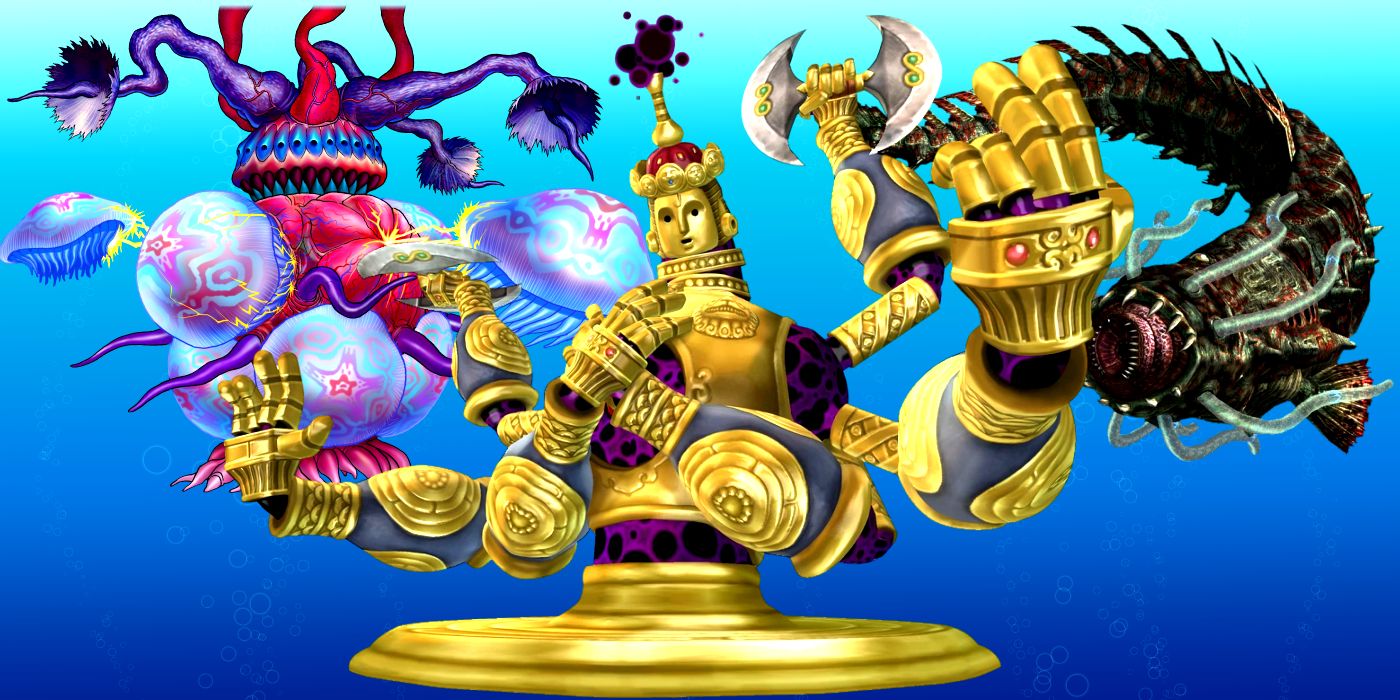 While numerous fans of The Legend of Zelda dread the series’ water-themed dungeons, such locations deserve credit for at least one thing: imaginative bosses that put up awesome fights. There are few enough bosses that it’d be fair to label as genuinely bad, as even Zelda‘s worst dungeons emphasize puzzle-solving and spatial consciousness in a way that extends to providing players with fights that test both their wits and their reflexes. Facing off against a new one for the first time is most always a thrilling experience, and water dungeons refuse to slouch in providing that impact, regardless of how much trouble players might have in reaching their final fights.

Water levels have an unfortunate tendency to be unpopular in video games that don’t center around them, for reasons ranging from underwhelmingly sparse layouts to unwieldy changes in gameplay mechanics – and rhythm and music are better-regarded Zelda quirks for a reason. Zelda‘s aquatic dungeons tend to be the black sheep of their games because certain parts of them become accessible via such factors as water levels and changing currents. It’s easy for a player to become disoriented navigating spaces like Ocarina‘s Water Temple or Majora’s Mask‘s Great Bay Temple while trying to remember where they have and haven’t already investigated under changing conditions. Even Breath of the Wild, containing simplified dungeons, features the water-themed Vah Ruta mech’s interior, which can be obtuse to complete.

Related: Ocarina Of Time Proves Link Is A Genius (But You Probably Missed It)

No such issues arise in water dungeons’ boss fights, which can focus the memorability and near-alien strangeness that pulling from underwater motifs allows for and creative, quick-thinking play into tight, punchy encounters. Morpha, boss of Ocarina of Time‘s hated Water Temple dungeon, isn’t a remotely difficult foe, but its buildup and concept are genuinely unnerving: after spending nearly an entire dungeon swimming or walking underwater, Link encounters a deep pool of what Navi urgently warns him is “not normal water” before a Jaws-esque submerged view gives way to a great transparent amoeba rising from it, stretching its body into arms to reach out and attack the young swordsman. Meanwhile, Barinade, boss of the sea creature-filled Jabu-Jabu’s Belly before Morpha, is a gigantic, mobile, electrified anemone that keeps a player intimidated with its bizarreness and puts up one of the better fights Young Link faces to match.

Other Zelda water monsters may not be as iconic as the two (as any creature that never appears in Legend of Zelda: Ocarina of Time is liable to be), but they’re no less standouts. Majora’s Mask’s Gyorg is a polarizing fight due to its leaping in and out of the water, attempts to knock Link into its domain, and requirement that the player learns to act quickly underwater as Zora Link with little time and space. But it’s a wonderfully satisfying boss to fight once mastered. Even on principle, few things are cooler than doing battle with a giant masked piranha – and a contender for one of those few things is slaying an eel the size of a dragon, as Link does in Twilight Princess. The Lakebed Temple boss weaves through the water of its arena such that it manages to look like Hydrus from Shadow of the Colossus, insta-cool factor that manages not to wear out its welcome due to the battle even playing comparably to a faster-paced Hydrus.

Even Skyward Sword‘s Ancient Cistern features Koloktos, which compensates for the lack of anything overtly watery about it with being nothing if not intimidating. The massive golden idol requires Link to watch its increasingly-aggressive attack patterns for opportunities to dismantle it with his attacks and reach its weak body, a thrilling and gratifying battle loop that marks a memorable fight with a well-designed boss.

Aquatic environments are some of the most uniquely atmospheric and fascinatingly (yet frighteningly) strange places a human being can experience in real life. While its experiments in creating its own may elicit varying player reactions, The Legend of Zelda‘s best bosses never fail to serve as amazing capstones capturing their own degrees of the majesty, uncanniness, or terror that a watery adventure ought to entail.